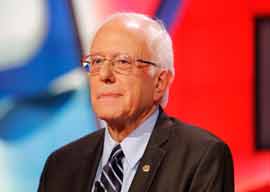 Who would have thought the best presidential ad of the cycle would come from a self-identified socialist?

Senator Bernie Sanders” latest campaign video is not full of demagoguery or puerile cracks about personal appearance. There is no fearmongering. It doesn”t even feature the candidate blabbing on with trite platitudes about freedom and opportunity. There is only Bernie and his throng of supporters, energetic and happy to live in this country. Featuring the singsongy refrain of Simon & Garfunkel’s “America,” the ad beams with patriotic, Americana spirit.

It’s a damn shame, because the candidate behind it is a disappointment. He might even be a total fraud, according to a few recent reports. More on that later.

First, I have to admit something: I wanted to like Bernie Sanders. I really did. Like Russell Arben Fox, I thought he was a “front porch socialist,” which is a fine alternative to the corporatist war-hungry sleazebags who mostly make up Congress. Socialism might be unworkable and murderous, but there’s nothing wrong with a bit of communitarianism to balance out the sybaritic impulses of the marketplace. Everything in moderation, said Oscar Wilde.

“Unfortunately, while the Green Mountain senator may vote his convictions in Congress, his personal life is rife with hypocrisy.”

Bernie Sanders also seems to have a genuine concern for the losers of our society. The guy who loses his job to outsourcing; the mom whose low-wage job goes to someone who works for pennies and can”t speak English; seniors living on fixed payments who only see prices at the grocery store go up, never down”this is the Sanders constituency. Their struggle is part of the reason for his resistance to open borders and their tendency to drive down working-class wages.

Most of all, I like Bernie’s story. He was once a single father to a son, scratching out a living doing piss-poor carpentering and writing leftist screeds for an alternative Burlington newspaper. His first home in Vermont had only dirt floors, before Bernie put in the wood himself. Most of the time he lacked electricity. You can”t get more marginal than that.

But alas, the Sanders saga was too good to be true.

After his first upset electoral victory for the mayorship of Burlington, there was a lot of promise in Bernie’s independence. His record in Congress, after being elected to the House of Representatives in 1990, has been thoroughly anti”Wall Street and egalitarian, with a nice dose of pro”Second Amendment votes tossed in to appease gun-toting Vermonters.

Unfortunately, while the Green Mountain senator may vote his convictions in Congress, his personal life is rife with hypocrisy.

Sanders has propelled himself to the near-top of the Democrats” favorite list based on, among many things, his support for a “living wage.” “The current federal minimum wage of $7.25 an hour is a starvation wage,” the irascible senator proclaimed at a Capitol Hill rally last year, “and [it] must be raised to a living wage.” That’s a nice, and unrealistic, sentiment. But the problem is that Sanders doesn”t think his own employees deserve that kind of pay. According to the Media Research Center, the Sanders campaign pays its interns only $12 an hour. That’s a hefty sum for phone bankers and coffee fetchers. But it’s not enough to pay apartment rent and feed a family. Does Bernie not think his college-age employees deserve to live securely?

Sanders” “do as I say, not as I do” approach also pertains to the app economy. Not one to let an industry operate away from the watchful eye of the government, the senator says he has “serious problems” with companies like Uber because they are “unregulated.” And yet, as a study by National Journal showed, Bernie used the ride-sharing service Uber for 100% of his taxi rides for the first six months of his campaign. For a company that skirts worker protection laws, one might think Mr. Solidarity would refuse to patronize Uber.