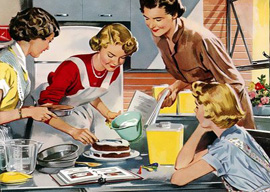 Willingly or not, women play a starring role in the death of the West.

Women in Europe and America have made one great big fat suicidal error as a result of modern feminism since the movement’s inception: They have confused work with freedom. This confusion has had catastrophic consequences for all of us because it has fatally infected the core activity of any healthy civilization: the creation and upbringing of children.

During World War II there was a chilling slogan stamped in wrought iron above the entrance gates of Auschwitz in Poland where it can still be seen: ARBEIT MACHT FREI (Labor Makes You Free); labor in this case meant work rather than giving birth.

That Nazi slogan could just as well be used nowadays by women in the West and their male collaborators (we know who you are) as their own slogan. What they have desired above all else (and got) this past half-century is work.

Nearly all work, if we mean the work that most people in the West do day after day in exchange for money, is a life sentence in prison. It is dull, repetitive, and soul-destroying. It does not liberate.

The fact that women work means that fewer children are born. It also means that those children are raised by women other than their mothers. It also cranks up the stress still more on the already very fragile equilibrium in the male-female dialectic.

Women, unlike men, once had a way to avoid work. They still do, if they chose to compel governments to organize things differently. The choice is theirs and theirs alone.

If women stopped work tomorrow it would solve the West’s chronic unemployment crisis overnight. Due to the dire shortage of workers left, salaries would rocket.

But more important than the cash side of it, surely women would be so much happier.

Let me take the example of Carla, my young Italian wife and mother of my five small children. Carla does not “work” 9-5 outside the home for a wage. She works instead 24/7 at home and for free. People where we are in Italy think she is out of her mind. Not only does she have more than the one or two children permitted by fashion, but she does not even “work.” I think they are out of their minds because I am convinced that she is far more fulfilled, free, and creative than if she were a part-time mother wage slave like them.