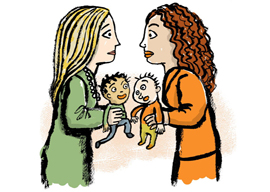 I”ve had a crush on my best friend’s husband for the past five years. I have never acted on my crush because I thought it was just me, plus she is my best friend. Recently I get the impression he likes me, too. Should I say something?

No! Don”t say anything! What would you say? Could you possibly think it was actually kosher to say to your best friend’s husband, “I like you and I think you like me, so why don”t we ditch Jane and see how things go?” Or maybe you were thinking of telling your best friend that you have a crush on her husband and you think he likes you, too, so maybe she should step out of the way and allow you to snuggle, walk on the beach, and have sex with him to find out if it was something more than a crush? Get a hold of yourself. That is insane, despicable behavior.

“Picking up a mom friend in a playground is the equivalent of picking up a man in a supermarket”it’s not easy, and you really don”t know what you are getting yourself into.”

Seeing as he is your best friend’s husband, I assume you spend a lot of time together and what you think is a signal of interest is probably him treating you like a close friend. Leave him alone! If you actually are stupid enough to decide to be the worst friend on the planet and try to break up their marriage, the husband will never take you too seriously after such a glaring display of your utter untrustworthiness.

I live in Rome, and recently everyone is talking about a prediction from “the earthquake man” that there will be a devastating earthquake here on May 11th. I know I am silly for listening to this kind of stuff, but after watching Japan get ravaged by nature, even though I feel very stupid and everyone tells me I am crazy and should not listen to such nonsense, I still really feel like putting together an emergency kit or maybe even putting a self-inflating raft in my hall closet. Do you think that is insane?

Get the emergency kit and the raft! What do you have to lose? If it makes you feel better, who cares what everyone else says or thinks? Is the raft actually going to save you? Is there actually going to be an earthquake in Rome? Who knows? If a backup plan makes you feel safe, do it. You are not hurting anyone by simply putting a raft in your hall closet. Paranoia is an essential part of staying safe, whether you are walking down a dark street alone or buying an emergency kit. If more people were paranoid instead of blindly following the little duckie in line in front of them, we would all be better off.