Yes, They Cheat. We Have to Win Georgia Anyway 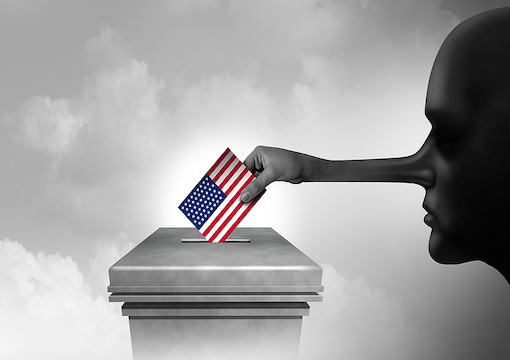 I’m neither heartbroken nor surprised that President Kushner didn’t get a second term. The good news is, Republicans are finally talking about vote fraud!

Going forward, the GOP’s sole objectives should be:

3) Ensure that the Democrats don’t steal the two runoff elections in Georgia on Jan. 5, 2021.

Donald Trump spent four years trying to out-pander the Democrats, the end result of which was that he slightly increased his minority vote — which he still lost — while sacrificing a chunk of the numerically larger white male vote.

Who could have guessed it? (Except anyone watching Trump’s presidency.)

In fact, the only demographic that gave a smaller percentage of its vote to Trump this year, compared to 2016, was the one he’s been ignoring for four years while issuing daily paeans to blacks, Hispanics, women and gays. Whatever happened to Trump’s wacky 2016 ploy of appealing to that small niche group known as “Americans”?

On the other hand, of course the Democrats cheated. They cheated the way they always do, by manufacturing votes for people they knew were not going to vote because they are dead, ineligible or apathetic. COVID allowed them to jam through mass mail-in voting, something they’ve been dreaming of forever. You want people to DIE because of your absurd contention that vote fraud exists?

Presumably Democrats didn’t abandon their usual vote-stealing methods, such as driving homeless people to the polls in exchange for a box lunch, “helping” nursing home residents fill out ballots, and waiting for the polls to close to discover pallets of uncounted ballots. This year, Democrats could also vote the millions of mail-in ballots littering the countryside.

Trump warned that there would be massive fraud with mail-in ballots, but as with all his other great points, he didn’t actually do anything about it. True, Trump tweeted, “There is NO WAY (ZERO!) that Mail-In Ballots will be anything less than substantially fraudulent.” It turns out that didn’t actually accomplish anything. It was much like his “LAW & ORDER!” tweets or this (my favorite) tweet: “bring our troops back home. Stop the ENDLESS WARS!”

Far from an “authoritarian,” Trump seemed to be utterly unaware that he was president.

Now it’s too late. The vote fraud is baked in the cake. At least this time, one of the victims of Trump’s all-talk presidency is him.

“Currently, the fate of Western civilization comes down to two runoff Senate elections in Georgia.”

Currently, the fate of Western civilization comes down to two runoff Senate elections in Georgia. If Republicans win, they will hold the U.S. Senate. Even with a handful of Mitt Romneys, the Democrats’ most psychotic plans will be dead on arrival. That means: No Green New Deal, no District of Columbia statehood, no court packing and no mass amnesty.

But if they lose, the Democrats will have the trifecta: the presidency, the House and the Senate, and welcome to hell.

It’s probably too late to cancel early voting, but could you at least compare the signatures on mail-in ballots this time, Georgia?

Back in June, The New York Times ran an article condescendingly refuting Trump’s claim that mail-in voting wasn’t secure. The Times’ arguments were: 1) We checked with election officials and they assured us their systems are fraud-proof; and 2) Oh, relax! The signatures on mail-in ballots have to match voters’ registration signatures.

On point one — we checked with election officials — will the Times accept that as proof in other situations? How about asking police chiefs if their departments are beset with “systemic racism”? Why did Elizabeth Warren want all those non-disclosure agreements against Bloomberg L.P. opened? Michael Bloomberg was not only the founder, but the CEO of the company. If he says there’s nothing to it, then there’s nothing to it — right, New York Times?

The only serious defense of mail-in voting made by the Times was this:

“Even if a ballot were to get stolen and submitted, it would run into another obstacle. Voters must sign the ballot return envelope. Workers at the election office are trained to examine signatures, checking to make sure the signature that comes in matches the one on file for the voter before sending the ballot along the line to be counted.”

Yes, totally true. Signatures aren’t that easy to forge, especially if you don’t know what the signature is supposed to look like.

But the problem is: THAT’S NOT WHAT HAPPENED. States didn’t make sure the signatures matched.

First, we got: What these jerks at Breitbart didn’t tell you is that we have a procedure! Trained election officials will compare the signature on file with the signature on the absentee ballot. Not only that, but the public can watch — in person or online!

Then, after the election: Yeah, we didn’t really have time for the signature matching and our poll workers were worried about COVID, so poll watchers weren’t allowed anywhere near the signatures. No, we threw out the envelopes so you can’t check our work.

You have to knock this crap off, Georgia. It’s bad enough that the Democrats demanded — and won — such a laborious process to disqualify ballots with mismatched signatures that it was easier for election officials to just approve them all. But preventing poll watchers from observing and videoing the signature “matches” is insane.

If the poll workers are so worried about COVID, they should get another job. Let a younger, healthier person do it. Barring that, TRUST THE SCIENCE! Didn’t you hear Fauci? Wear a mask.