A Story of Sexual Manipulation 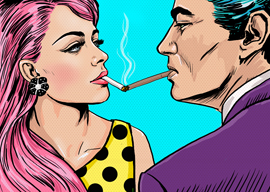 Good advice for women, you may think, but in the present climate women leveraging their attractiveness to advance in areas where it’s not actually relevant can be bad news for men. For it allows for irresponsible and—even worse—manipulative behavior, which many people, given their deep, unconscious paternalism in favor of women, are unlikely to notice. Nor is justice served by such female privilege and bias against men.

Consider the Harvey Weinstein video that recently went viral. Taken in September 2011, it shows Weinstein and a woman named Melissa Thompson at the Weinstein Company offices in New York. Twenty-eight at the time, Thompson wanted to pitch her tech start-up company’s new video and analytics service to the man, then so powerful. Thompson says she showed up expecting to meet with Weinstein’s marketing team, but it’s unclear why she had that expectation. Did she get it from Weinstein himself? Or did she assume, based on past experience in such situations, that that would happen? As part of the demo, Thompson recorded their meeting.

While they discuss business each flirts with the other, the man leading the way, as is usually the case between the sexes. According to Thompson, who is suing Weinstein, after the initial meeting they met later that night at the Tribeca Grand Hotel lobby. She went back to his room with him and, once inside, Weinstein raped her, she claims. Weinstein denies all nonconsensual sexual contact, his lawyer describing Thompson as a cynical opportunist.

Writing for Sky News about the video, Hannah Thomas-Peter reports:

There are…exchanges when she engages with Weinstein, leans towards him, touches or play punches his shoulder and arm, and responds to questions about her personal life.

During one interaction they are talking about the video platform and Ms Thompson says to Weinstein: “Data’s so hot right?”

Asked by Thomas-Peter whether she had led Weinstein on, Thompson said: “I don’t think I purposely encouraged him.”

The italics are mine, because here the key word—so psychologically revealing—is “purposely,” suggesting as it does that Thompson was never honest with herself in the first place about her own manipulative intent. We are to believe, evidently, that an external force—perhaps some phallogocentric phantom—came over her when she flirted with Weinstein both physically and verbally. Twenty-eight years old and having her own company, Melissa Thompson, but in eros as clueless and helpless as a child. She did not “purposely” lead Weinstein on. She did not “purposely” repeatedly tell him he can flirt with her—one of the earliest topics of their conservation—nor did she “purposely” let him run his hand up her leg under her dress and caress her shoulders. It all just, like, happened, like, you know.

Needless to say, Harvey Weinstein is a creep and I’ve no desire to defend his behavior in general. It must be said, though, that this rape allegation seems rather dubious. Maybe Weinstein did rape Thompson, but in any event she flirted with him and allowed him to do the same when they were alone together earlier in his office. If Thompson didn’t want to be intimate with Weinstein, she shouldn’t have gone back to his room.

“But she wanted him to become her client,” some will say.

Once again: “No, Harvey, I’m not interested in that.”

Not every client is worth having; not every compromise is worth making.

The fair sex, to be sure, is often wrongly pressured by men to compromise themselves. But if they don’t want to play the dirty game, then they must not play it. In a perfect world there wouldn’t be any Weinsteins, but in our world there are Weinsteins, lots of them.

“Men and women are now freer than ever before to exploit one another, and so, in their different ways, they do.”

Doubtless Weinstein, ever seeking to leverage his power, wanted to use Thompson just as he had many other women. Yet in this crass instrumentalism—hardly unusual in eros now—he and Thompson are very much alike, and the following statement of hers smacks of projection:

I think [he] was playing a cat-and-mouse game from the very beginning to see how far he could push me, and what my reactions might be, so that he could gauge…how he would play me; where my levers where, what were my vulnerabilities.

Behold Thompson’s self-delusion. How oblivious, this woman, to her own cat-and-mouse game, as if she weren’t trying to play him, too. It’s more accurate, even, to call hers a bait-and-switch game. For having baited Weinstein with the idea of sex in order to get his business, she now switches her story, and indeed with a lawsuit in view. Aided by selective memory, she affects to be innocent. Out comes Thompson’s tape—seven years after it was recorded. What took so long? Here fill in the mind-numbingly predictable talking points, as reliable as the ending of a Lifetime movie: “I saw that other brave women had broken their silence. I didn’t want to be complicit in letting this happen again. If I didn’t take a stand…”

I don’t doubt Thompson’s sincerity. But I believe her account of what transpired is inaccurate, an effect of self-deception. She’s a true believer, Thompson—that is to say, truly self-deceived. For she doesn’t want to face her own manipulative intent, and in her hurt feelings, in her accurate awareness of having been used, she’s turned Weinstein’s manipulation of her into rape. Such mental gymnastics are far more common than people realize, and correlate closely to the loss of traditional mores since the sexual revolution. Men and women are now freer than ever before to exploit one another, and so, in their different ways, they do.

But though Thompson has fooled herself, why should she expect to fool us? The reason is that self-delusion, by its very nature, entails a willful misunderstanding of events, with the result that they subsequently appear to you other than they actually were. The truth thus obscured, you cannot but expect others to perceive as you do. Alas for the pretender, the discordance with reality gives the game away to others. “It may justly be concluded,” said Dr. Johnson, “that it is not easy for a man to know himself, for wheresoever we turn our view, we shall find almost all with whom we converse so nearly as to judge of their sentiments, indulging more favorable conceptions of their own virtue than they have been able to impress upon others, and congratulating themselves upon degrees of excellence.”

What men see as mixed signals, women experience as reality itself as they surf hypergamy’s whimsical waves. Older women used to teach young women that certain actions have a symbolic meaning. From them young women would learn to set firm boundaries, and not to tease a man if you don’t want him to come on to you. Not going back to a man’s room when sex is not desired—this was common sense. Today anything goes. Today traditional good sense, according to feminist obtuseness, is considered “blaming the victim.” “Where’s my cake, wicked patriarch?! What?! I can’t have it and eat it, too?!

Women from outside of the Western world, their minds not ruined by other women, but used to following customs created by men, tend to find facile talk about “blaming the victim” bizarre, and I have met many who regard it with contempt. “How silly, how childish are these feminist women,” they think. And it’s constantly lost on feminists, the irony that by failing to take responsibility for their behavior, women only reveal that they are not really serious about “gender equality,” but rather want special treatment. Indeed, they want chivalry smuggled in under equality’s name.

Thus feminists show that all along their feminism was motivated by mere status envy: They want the same worldly esteem men get—and who can blame them?—but are unfit to navigate the sexual jungle. Well, that’s certainly disappointing for feminists—all stunners forever in demand—but perhaps Rosie O’Donnell, Hillary Clinton, or some other national sage can lead a quilt-making revival: Diversion, after all, is as good as it gets in this world.

Watching the two videos—Thompson’s meeting with Weinstein and her subsequent commentary on it to Hannah Thomas-Peter—the woman seems to be two different people. Seven years later, she’s now overweight, her hair short, wearing schoolmarm glasses. It’s as if she was given a makeover by the Women’s Studies department at Berkeley! Is Thompson taking revenge, at bottom, on her own declining sexual market value?

Whatever actually happened between her and Harvey Weinstein, Melissa Thompson might have learned a lesson about the need for responsible, adult behavior in the sexual domain. Instead, she’s gone the familiar feminist route, a partisan of moralistic banalities:

We don’t have to live with things that are illegal and abusive.

We don’t have to live with being raped when we think we are going to a business meeting.

As ever, the media is happy to cash in. Notice that, despite having published a video that, if anything, would seem to discredit Thompson, Sky News nevertheless gives us the clickbait headlines: “Video shows Harvey Weinstein behaving inappropriately with businesswoman,” and “The producer is heard telling Melissa Thompson he wants to ‘have a little part’ of her in a meeting to discuss her tech firm.” Nothing here about Thompson’s own manipulation and mixed signals. The more damsels in distress, the better for advertisers.

In the present climate, of course, it is perfectly acceptable to talk about the many bad things that men do. For progressives, in fact, doing so appears to be a sign of moral sophistication, what intelligent and educated and, above all, good people do. It is not so with women. Their evils are unspeakable, even if the manipulations of Sen. Dianne Feinstein, Christine Ford, and her attorney Debra Katz should cost Judge Brett Kavanaugh confirmation to the Supreme Court. For again, when it comes to women’s culpability, paternal bias toward them hinders objective thought, and quite unawares. Thus, sex and romance, though endlessly complex, are made to seem rather simple: All will be well if only those horrible men get in line.

The simplification of eros goes on in the age of unfettered sexuality, when even eminent scholars like Catherine Hakim and Camille Paglia counsel women, in so many words: “If you’ve got it, flaunt it.” Man is to be enticed by his greatest pleasure, yet one false slip, or false accusation, and God help him. And all the while, owing to paternalist bias toward women, everybody is supposed to believe the #MeToo movement is altogether pure. That it is—like so many things human—rather mixed, nobody is supposed to acknowledge.

Anyway, if we really care about equality, we must be willing to make both sexes accountable for their behavior. We must be willing to accept that sex is darkly complex. Otherwise we are merely hypocrites, women shall have a license to perpetual childhood, and no man will be safe from false accusations.