A Woman Should Vote With Her Husband 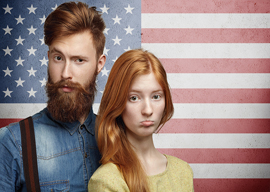 This election is going to have unprecedented political infidelity. A good 20 percent of husbands for Trump predict their wife won”t vote with them. This is wrong for a number of reasons but the biggie is, a family is supposed to be a cohesive unit. He can”t have his better half canceling out his vote. Even if a husband wants to vote badly”say, for Hillary”his wife should stand by her man and make the same mistake. Nobody’s saying there can”t be discussions and women shouldn”t have their own political beliefs, but the final decision comes down to the guy paying the bills and she should abide by that. This is counterintuitive because we live in a feminist fantasyland, but it’s really the same as deciding where your family is going to live. A married couple agree where they”re going to go based on what’s best for the kids. If he gets an amazing job offer in Cleveland but she’s a city gal from Manhattan, she needs to accept that Ohio is best for the future of their family. Voting is the same. You”re deciding where the country is going to go based on what’s best for future generations.

Unfortunately, this is not happening. A map of America “if just men voted” is almost completely red, whereas a map of America “if just women voted” is almost completely blue. The maps don”t differentiate between married and single, but judging by this massive split in what gender likes what candidate, we can assume the married map would be similar. Single people are a lost cause anyway. The women vote almost exclusively out of spite. They are voting for Hillary because she has a pussy, they hate Trump because he grabbed one, and they elected Obama because he makes theirs wet (they elected Trudeau because he is one). As for single men, I”m not convinced they even vote. There are also stay-at-home dads and situations where the woman is the breadwinner. This is awkward, but if you”ve made her the patriarch then her husband (a.k.a. wife) needs to vote with her. For the most part, however, we”re talking about a home where the father makes the lion’s share of the money and the woman’s contribution is using her magic powers to make babies. They have a symbiotic relationship where they”re both utilizing their greatest strengths. Patriarchs are best at driving, so he’s the helmsman. He doesn”t want to fight about it because he doesn”t want to rock the boat, but for her to turn starboard while he’s going port is to split everything in half and now the whole family is drowning. Voting against your husband is a tiny divorce.

It’s become perfectly normal, even cool, to vote the opposite of your significant other and that may be because we”ve lost all faith in the political process. I happen to think it’s very significant. Why should voting be any different than, say, religion? People convert all the time to get married. Trump’s oldest daughter became an Orthodox Jew so she could marry Jared Kushner. This is because they need to be going to church together and their children need to be on the same page. Families often share the same sports team and this too is linked to the children. How can you be cheering for the Yankees at Citi Field next to your son whose a Mets fan? “Sucks for you, kid, but I”m going to the World Series!” The same goes for this ridiculous idea of not taking your husband’s name. It may make you feel progressive to have a different name, but now your kids are stuck with a hyphen. What happens if they meet another child of self-indulgent people? Does that kid have four last names? We keep reinventing marriage and fracturing the family to make ourselves look modern, but families make communities and communities make countries. If the head of the family isn”t deciding who runs the country, there’s no country.