Are You Ready for Four Years of Ball-Busting? 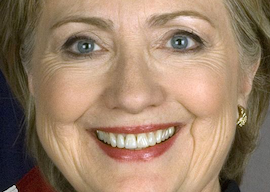 This essay is intended solely for our male readership. Our three female readers can sit this one out. Go bake us a pie or knit us a sweater or something.

Men: If Hillary Clinton wins on Tuesday, you might as well lop off your testicles with a meat cleaver and ship them parcel post to Washington, DC. Either that, or you can wait until the new Queen Bee’s Castration Squad knocks down your door and leaves your groin as flat and smooth as a Barbie Doll’s crotch. Get ready to have a vagina spot-welded onto where you used to have a penis.

You think I’m kidding, don’t you?

Consider this: Many idiotic American voters pulled the lever for Obama in 2008, thinking he’d usher in a “post-racial America” rather than a “most racial America.” But instead of eight years of racial healing, we were bludgeoned with ceaseless disparagement of All Things White. If Clinton were to win, the focus will shift toward All Things Male.

Consider that women are four times as plentiful as blacks; it has been my experience that they are also 100 times more vengeful. If anyone at this point is stupid enough to think that electing a woman because she’s a woman will improve relations between the sexes, you deserve to be publicly gelded on a Pay-Per-View special by a female pygmy named Sappho X.

“Angry women may put Hillary over the top in order that she can put men at the bottom.”

As a man, you should be concerned that millions of American women will walk into polling precincts on Tuesday, wrap their gummy labia firmly around the lever, and yank it hard for Hillary Clinton’s