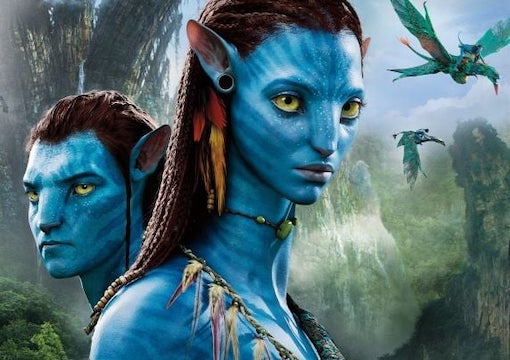 I can vividly recall driving along the coast of Baja California in late 1996 a few days after being diagnosed with cancer, feeling sorry for myself about my impending death.

Suddenly, I came around a bend and there was the damnedest thing I’ve ever seen: a vast old-fashioned ocean liner with four smokestacks. On closer inspection, it proved not to be docked in the Pacific as I’d initially assumed, but instead was up on the cliff in a giant tank of water.

Eventually I realized that this must be the set for James Cameron’s much-derided and vastly over-budget film spectacle Titanic. I tried to scoff like everybody else had, but the magnificence of his folly overrode my cynical instincts. At some point it then struck me that if Cameron could carry out something this crazily outsize, I really ought to be able to muster the willpower to get to my all doctor’s appointments and beat cancer.

“Xenophobic as this may sound in the current year, Avatar’s 10-foot-tall alien heroes are ugly.”

Granted, when I finally saw Titanic in 1998, I didn’t like it that much, although I admired how Cameron could somehow combine his ultra-masculine love of giant machines crashing to catastrophic ruin with his profound understanding of teenage girls’ emotions. But I definitely appreciate the concept of James Cameron.

That said, the fundamental problem with Cameron’s Avatar franchise, which has made a respectable but not overwhelming return this month with its first sequel, Avatar: The Way of Water, is that, xenophobic as this may sound in the current year, its 10-foot-tall alien heroes are ugly.

These days, we are constantly lectured about how our instincts about who is and who isn’t good-looking are deplorable social constructs. But still…Cameron’s Na’vi are hard to look at for three solid hours.

In this sequel, the natives of Pandora comprise about 95 percent of the movie because the human (a.k.a. American, a.k.a. white) bad guys have transitioned into Na’vi themselves through genetic engineering or virtual reality or whatever in order to better hunt down the leader of the Pandorans, Jake Sully. He used to be a human himself, but in the first film he transitioned via species-affirming care into a big blue space monkey for reasons that no doubt were explained in detail in the 2009 original—Cameron is a hard sci-fi guy, not a fantasist, so he comes up with technical explanations for everything—but which I’ve completely forgotten.

The original Avatar, despite breaking Cameron’s own record that he set with Titanic a dozen years before for the biggest domestic box office haul, is a famously forgettable flick. Even in an era when any kind of cinematic nonsense can inspire a fan cult, few Avatar geeks emerged. How come?

For one reason, Avatar was a bit of a fluke. Movies tend to be a countercyclical good that do better at the box office during hard times because they are cheaper than most other forms of entertainment, such as major league sports events. So, by the end of 2009 after the first full year of the Great Recession, folks felt like they deserved to take the family to an event movie. And Avatar, with Cameron’s breakthroughs in 3-D technology and terrarium-like subject matter designed to show off his effects, was definitely an event.

Of course, movie theater audiences shortly afterward got bored with 3-D. And 3-D never much made the transition to home viewing, which is where nerds are nurtured by being able to watch the same movie over and over.

But a less mentionable reason for the lack of long-term interest in Avatar is that the movie isn’t all that pleasurable, in part because few folks found the blue pituitary cases terribly appealing to look at.

It could be that the homeliness of the humanoids is Cameron’s fault, that another auteur might have come up with a somewhat human-looking extraterrestrial that us earthlings would have found beautiful to gaze upon with fond regard.

On the other hand, has anybody else accomplished that yet? Sure, you could design completely non-humanoid aliens that look like lovely galactic ocelots or whatever. But once you start down the path of conjuring up something with the basic structure of Homo sapiens, you are at risk of winding up in an unsightly valley in which any deviation from our norm looks like a defective subhuman.

For instance, Zoe Saldaña is a lovely lady in earthling form, but as an alien in Avatar and Guardians of the Galaxy, she’s surprisingly hard on the eyes. Yet, after all, evolution molded us to enjoy looking at the fittest examples of our own species, so imagined aliens tend to set off our innate alarms about birth defects.

Perhaps many people can sit through one showing of a humanoid alien, but not multiple ones. Interestingly, another pro-alien science fiction movie that was a colossal box office hit but has failed to win over an enduring audience is Steven Spielberg’s 1982 E.T.

Another problem that has gotten worse for the Avatar franchise in the thirteen years that Cameron has fiddled with this film and its three partly completed subsequent sequels is that Native Americans have fallen further out of fashion.

The basic idea for the 2009 film was more or less lifted from Robert A. Heinlein’s 1948 juvenile sci-fi novel Space Cadet, in which the young soldier heroes help the environmentally sensitive natives of verdant Venus repel a rapacious Terran mining company. Similarly, Frank Herbert’s 1965 sci-fi best-seller Dune depicted the revolt of the indigenous Fremen, led by an aristocratic Lawrence of Arabia-like outsider, against a mining operation.

But the Na’vi—i.e., Native Americans—aren’t as interesting to audiences as they were in 2009, much less in 1965 or 1948. Lately, natives seem kind of nativist. One 2022 exit poll suggested that American Indians may have even committed that gravest crime against humanity imaginable: voting Republican. Judging from op-eds, the United States of the Future isn’t going to return to taciturn American Indians, it’s going to be taken over by loquacious Asian Indians, who really don’t care about the environment.

Avatar: The Way of Water starts out tediously back in the same old forest as the first movie. Most science fiction assumes that planets are homogenous. Dune’s Arrakis, for instance, is a desert planet and nothing but a desert, while in Heinlein novels, Venus is always an Amazonian rain forest swarming with tropical life and Mars a Tibet-like cold desert inhabited by a few wise elders.

But then Jake and his turquoise family have to flee for shelter from the evil earthlings to an island paradise where they are taken in by the aquamarine sea people, who have evolved broad tails to power them through the water. (I suspect this second race of Na’vi is inspired in part by the nomadic seafaring Bajau people of Southeast Asia, who have evolved larger spleens to allow them to stay underwater longer as they dive for shellfish.)

Once Avatar: The Way of Water moves out of the shady woods onto the sunny ocean, the film becomes a fun Swiss Family Robinson-style adventure. The director of Titanic has spent a lot of time out at sea—I’ve often joked that Cameron, the explorer of the Marianas Trench, would less prefer to be a science fiction movie director than to be a science fiction hero himself like Jules Verne’s Captain Nemo—and he’s extraordinarily good at filming on and in water, which has often been a budget buster, such as with Jaws and Waterworld.

On the other hand, Cameron cares less than most famous directors about casting. Sure, in Aliens Cameron inherited Sigourney Weaver from Ridley Scott’s Alien. And Titanic featured a winsome Kate Winslet and a young Leonardo DiCaprio, who surprised me in 1998 by proving a major league leading man.

But Cameron has often succeeded more by extracting surprisingly strong performances from limited actors: most legendarily Arnold Schwarzenegger in Cameron’s two Terminator movies, but also Tom Arnold in True Lies. On the other hand, even Cameron can’t pull a genie out of a lamp every time. The two Avatar films suffer from Cameron’s tendency toward indifferent or overconfident casting, such as Perth-raised Sam Worthington as a discount Mel Gibson. And whichever pudgy Australian he hired to play the Captain Ahab-based whaler is notably lacking in charisma.

The sequel soon becomes an anthology of Cameron’s greatest hits. Did you like Sigourney’s exoskeleton suit in Aliens? (Of course you did.) Well, there are about a dozen of them in this movie.

Do you like giant ships sinking? Well, this movie has got a doozy, and while it may not take longer to sink than did the Titanic, it sometimes feels like it. The new Avatar is grindingly long at three hours and twelve minutes because the director has had a whole bunch of good ideas over the past thirteen years and is going to show you every one of them.

I wish I could have seen an Editor’s Cut minus about 45 minutes.