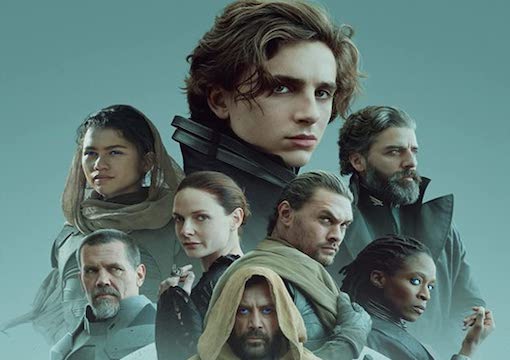 Dune is an extraordinarily impressive (if not utterly enjoyable) adaptation of the first half of the epic 1965 science-fiction novel that George Lucas borrowed heavily from for his boys’ version in Star Wars.

The book by Frank Herbert, a GOP speechwriter who sensed early various late-’60s currents such as drugs and ecology, is a spectacular pastiche set 21,000 years in the future under a galactic empire where, because intelligent aliens don’t exist and technology is advanced but stagnant, human politics is all-consuming. The governmental system resembles that of Renaissance Europe, with aristocrats struggling to maintain their planetary autonomy despite the growing power of absolute monarchy.

Both sides are advised by the Bene Gesserit, a Jesuit-like order of cynical sorceresses, who have been pursuing a vast eugenics project to breed a superhuman who can see into the future.

“How many recent movies bring Lawrence of Arabia to mind?”

They may have found him in 15-year-old Paul Atreides (played by the annoyingly spelled Timothée Chalamet), son of Duke Leto (Oscar Isaac), a culturally Spanish aristocrat modeled on Machiavelli’s optimistic portrayal of the House of Borgia in The Prince, and his loving concubine Lady Jessica (Rebecca Ferguson), the most adept graduate of the Bene Gesserit convent school.

The emperor, for murky reasons of his own, gives House Atreides the desert planet of Dune as a fief. On Dune, the profitable mining of the psychoactive performance-enhancing drug “spice” is being hindered by the guerrilla rebellion of the indigenous Fremen (i.e., free men). They are modeled on Lawrence of Arabia’s Bedouin revolt in the desert, the 19th-century Muslim Caucasus resistance to Czarist imperialism, and the Sioux struggles with intrusive gold-miners that led to the battle of Little Big Horn.

The Bene Gesserit have planted a prophecy among the Fremen that Paul will be their Mahdi (messiah) and lead them on an interstellar jihad, which eventually turns out in the sequels to be a bloody catastrophe for the whole galaxy.

Herbert deserves credit for his prescience in worrying about jihad in the early 1960s when everybody else assumed that secular Nasserite Arab nationalism was the future of the Middle East.

As with Robert Heinlein’s 1961 novel Stranger in a Strange Land, it took several years for the public to grok Dune, but it finally became a huge hit among hippies. It’s considerably higher in literary quality than the verbose and self-indulgent Stranger, although Herbert couldn’t quite maintain his Dune career peak in his sequels.

Herbert became a star speaker at early Earth Day events, although I must confess that the novel’s environmentalist themes were too subtle for me to follow. A simpler (but ironic) conservationist plot device would have been if the bad guys, the German-Russian House Harkonnen, had been trying to exterminate Dune’s colossal metal-eating sandworms to stop their spice-harvesting juggernauts from being swallowed whole.

Dune is close to being a sword-and-sorcery fantasy, but it stays (narrowly) on the sci-fi side of the line because Herbert insisted on making up technical reasons for why, say, the nobles’ troops fight with swords and their leaders try to assassinate each other with poisoned jabs rather than just take off and nuke the entire site from orbit (it’s the only way to be sure).

Of course, the real reason for all the arms control in Dune is that edged weapons are cool. As Churchill complained after the Great War, “War, which used to be cruel and magnificent, has now become cruel and squalid.”

With Arrival and Blade Runner 2049, French-Canadian director Denis Villeneuve had established himself as a worthy successor to the Ridley Scott–James Cameron generation of sci-fi filmmakers, and now he has outdone himself with Dune. The scale and artistry of his inhumanly vast visual compositions would make Leni Riefenstahl jealous, and the inventiveness and detailing of his sets and costumes are memorable.

The typical sci-fi movie’s vision of the look of the future is whatever is coming into fashion at the time it was filmed. Hence, if you want to know which styles were au courant in a particular year in the past, just watch a sci-fi movie released the year after. Granted, I’m not terribly up to date on the latest haircuts and the like, but many of Dune’s creations, such as Lady Jessica’s veil-of-chains ensemble for occasions of state, seem deeply strange.

The 1984 adaptation of Dune flopped in part because of the poor special effects and producer Dino De Laurentiis’ insistence on squeezing the complex story into a single feature. (Curiously, the movie industry underestimated the public’s love of sequels back then.)

But some blame rested with the director, the estimable auteur David Lynch, whose personal predilection for the All-American Grotesque didn’t quite mesh with the book. In contrast, Villeneuve subordinates his personality to the source material (without slavishly trying to reproduce it word for word), and achieves a mood of ominousness rather than Lynch’s creepiness.

The new Dune’s casting is reasonably true to the book. The slight Chalamet’s boy-band emo looks are exactly what Herbert described for his protagonist. Similarly, Isaac is the American actor born to play a Mediterranean aristocrat, and the lesser-known Ferguson is a find as his northern European consort.

Still, much as I admire Villeneuve for his skill, ambition, seriousness, and lack of ego, he doesn’t quite spark joy. He’s been the anti-Tarantino in failing to get much charisma out of his stars (for instance, Ryan Gosling was a blank in 2049), other than the always fun Benicio del Toro as the Anton Chigurh-style hit man in Sicario, Villeneuve’s tribute to the Coen brothers’ Mexican-border classic No Country for Old Men.

That’s a problem because the Dune series is Herbert’s Nixonite warning against charismatic JFK-like leaders, but Villeneuve doesn’t elicit much star power from Chalamet.

Not surprisingly, Villeneuve employs two No Country stars in Dune. Josh Brolin plays the House of Atreides’ loyal retainer Gurney Halleck. But Villeneuve cuts out that military man/folk musician’s songs and most of his recitations from various hybrid holy books of the future (the Fremen, for instance, are “Zensunni”). While Herbert’s early-1960s brainstorm of merging John Wayne with Bob Dylan was…interesting, it’s probably for the best to streamline the character.

But that makes it hard to keep Halleck straight from Dune’s other macho soldier, Duncan Idaho (whose name sounds like it would work well for a fattening potato-based fast-food chain). Duncan is played winningly by Jason Momoa of Aquaman, who provides most of the cheeky relief from the weighty gloom.

Still, how many recent movies bring Lawrence of Arabia to mind?

Warning: The film, which is officially Dune: Part One, peters out at some random point in the middle of the novel, so don’t sit through the credits waiting for the real ending, which hasn’t been filmed.

The second half has not been publicly greenlit, which probably reflects studio uncertainty about whether theatrical releases are financially viable at all anymore. This one cost $165 million to make.

Dune is currently playing on the big screen in theaters (if you like the giant IMAX format, there would be no movie more worth an IMAX splurge than Dune) and at home on HBO Max. The advantages of streaming include closed captions for hearing the dialogue over Zimmer’s thudding score and the ability to stop the film to discuss what’s going on in the perplexing plot.

Dune’s forays into diversity casting are mostly non-obnoxious, although having a not terribly good black actress play the planetary ecologist Liet Kynes (a name that calls to mind John Maynard Keynes) flops compared with Lynch’s use of Max von Sydow.

In tune with the times, the evil Baron Harkonnen’s predatory homosexuality is downplayed relative to its prominence in the book.

But, in general, I didn’t notice Villeneuve much updating Herbert’s themes to kneel to the Great Awokening. Culturally and ideologically, Villeneuve’s Dune is Herbert’s Dune, a remnant of the transition from the Space Age early ’60s to the granola late ’60s.

That raises a broader point often overlooked: No matter how many silly speeches actresses give at awards ceremonies, most of today’s major directors, such as Villeneuve, the Coens, Nolan, Tarantino, Chazelle, Scorsese, Eastwood, Gibson, Linklater, Judge, Mangold, and both Andersons haven’t yet succumbed to Wokeness.