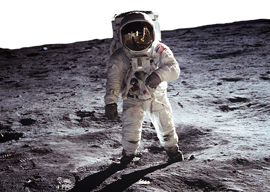 Is First Man, Damien Chazelle’s moody and moving biopic featuring Ryan Gosling as astronaut Neil Armstrong, anti-American for not having a flag in it?

Actually, this family drama features a lovely shot of Armstrong’s young son raising the American flag at his school while his father is on his first space mission.

Or is First Man a “right-wing fetish object,” as The New Yorker complains, because the moon landing was America’s most obviously awesome accomplishment of the pre–diversity über alles era? Richard Brody went on to whine that the movie is “whiter than a Fred-and-Ginger ballroom set,” with Chazelle racistly subscribing “to the misbegotten political premise that America used to be greater,” when, as everybody knows nowadays, he should instead have highlighted “Hidden Figures.”

We live in an era when to be an accomplished straight white man like Chazelle is increasingly seen as a political provocation undermining today’s most cherished belief—that the past was all just a giant conspiracy to make whitey look good. But in his brief but spectacular career, Chazelle has shown he simply doesn’t give a damn.

Chazelle directed Whiplash in 2014, a low-budget movie that won J.K. Simmons his long-awaited Oscar, and the retro musical La La Land in 2016, which was a Best Picture winner for about two chaotic minutes. Both are about ornery jazz musicians who don’t play by the rules, so it was surprising that Chazelle turned next to Armstrong’s authorized biography, the story of an engineer who absorbed training manuals for fun.

Armstrong was chosen to be the first man to set foot on the moon because of his large technical competence and his small ego (for an astronaut). During his long retirement he made sure to conduct himself with the gravity appropriate to his historic honor. Armstrong kept his politics quiet, but they were Jeffersonian-Lindberghian, opposing America being the world’s policeman and supporting state’s rights.

“Chazelle’s movie is literally atmospheric: The film is shot in a hazy blue-and-gray palette by a badly shaking camera.”

Armstrong was the most famous of the Gemini generation of better-educated astronauts who succeeded the more colorful Mercury spacemen featured in the 1983 film The Right Stuff, to which First Man functions as a sort of sequel. Chuck Yeager, the zeroth generation test pilot made famous by Tom Wolfe’s book, felt that Armstrong was an engineer-pilot lacking in a natural feel for flying.

But in a hair-raising series of crises, Armstrong made the correct decisions that enabled him to walk away. He had three feet of wing knocked off during the Korean War but parachuted to safety, had his X-15 rocket plane bounce off the atmosphere while reentering from space, had a thruster control get stuck open on Gemini 8, barely ejected in time from the lunar lander while practicing outside Houston, and, in the ultimate predicament, coolly picked out an ideal landing spot on the Sea of Tranquility as his fuel ran low.

Still, Armstrong’s extreme reasonableness makes him a challenging figure to dramatize. So Chazelle and screenwriter Josh Singer focus on a lightly fictionalized account of his tightly wound reactions to his daughter’s death, emotions he was too dignified and private to publicize.

Otherwise, the movie is historically well-grounded. If it errs, it does on the side of being respectful. For example, in the 1960s many young women threw themselves at astronauts. But in First Man the astronauts are all family men who immediately head home every evening to their suburban wives and children in their sensible family sedans. (By rumor, fighter jocks actually tended to drive Corvettes and were known to stop off for a drink or two.)

Unlike The Right Stuff, which used quick MTV-style cuts of aircraft flying to signify that they were going really, really fast, or 2001, in which the camera is pulled back to a stately distance, First Man is often shot from awkward angles inside cramped cockpits in intense jitter-cam close-ups. (Gosling suffered a concussion getting shaken around in the opening X-15 sequence.)

Chazelle’s movie is literally atmospheric: The film is shot in a hazy blue-and-gray palette by a badly shaking camera. In First Man, to fly through the turbulent sky is to be pounded by random vibrations and relentless noise. Only when Armstrong breaks out of the eddying atmosphere into the serene empyrean can he know the calm of a simpler universe ruled by pure physics rather than by the incalculable luck that governs our sublunary sphere, such as the fog that caused his partner to miss the runway or the pure oxygen that burned up his best friend on the launchpad.

In contrast, sublime vacuum makes the moon landing an exalted panorama of pure form with a new color scheme of black, white, silver, and gold (the expensive foil in which NASA wrapped much of the lunar lander). And yet, Earth’s untrustworthy atmosphere shields all life.

Earlier, when Armstrong’s pencil-and-paper calculations in Gemini 8 prove correct and he precisely locates the unmanned Agena spacecraft for the first-ever space rendezvous, Justin Hurwitz’s score breaks forth into a joyous waltz in a nod to Kubrick’s 2001. Of course, Hurwitz, who wrote the score for La La Land that is furnishing new standards for marching bands, isn’t quite as good a composer as 2001’s two Strausses. But still…

Chazelle’s choice of pop music for Armstrong to listen to is unexpectedly realistic. The 39-year-old astronaut doesn’t favor “Gimme Shelter” or other rock hits usually used to illustrate 1969; instead, his most beloved song is a weird easy-listening theremin record from when he was 17 entitled “Lunar Rhapsody.” The only late-1960s song used in the movie is black-power jazz poet Gil Scott-Heron’s obnoxiously racist “Whitey on the Moon.”

Still, for all its strengths, First Man ranks in the second tier of astronaut movies, less majestic than 2001, less overstuffed with entertainment than The Right Stuff, and, while nerve-racking, not quite as exciting as Apollo 13.

Gosling is the current decade’s go-to choice for men who suffer stoically, such as in Blade Runner 2049 and Drive. As the bottled-up Armstrong, he’s fine. But Gosling, other than his ethnic similarity, doesn’t look much like Armstrong, and with his half-Canadian/half-Brandoish accent doesn’t attempt to match Armstrong’s mild Ohio accent. And the star’s slightly dim diction makes him better at playing guys who aren’t quite as smart as they need to be, such as in his terrific performance in Blue Valentine.

As bumptious Buzz Aldrin, Corey Stoll provides the movie’s only comic relief. After each astronaut’s death, Buzz blurts out the code of the right stuff by which pilots keep up their confidence after their pals crash: He wouldn’t have died if only he’d made the correct decisions, like, of course, we would.

In contrast to Gosling, Claire Foy, who speaks the Queen’s English on The Crown as Elizabeth II, manages a Midwest accent as Armstrong’s wife. She has kept count of all the pilots’ funerals she has attended. She confesses to the wife of astronaut Ed White that she married Neil because he was so much more mature than the other fraternity boys. All she had always wanted was an ordinary life, only to find that her man’s reliability and focus have launched him toward an extraordinary destiny.