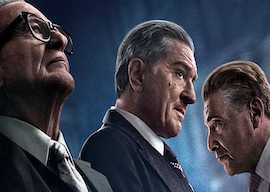 Martin Scorsese is trending on Twitter for denouncing superhero movies as being more like theme parks than films because “Cinema is an art form that brings you the unexpected.” And yet the director’s The Irishman proves that the expected can have its cinematic pleasures.

Imagine the best possible gangster movie that Marty Scorsese could make in his later 70s. Well, The Irishman is it, Scorsese’s autumnal reprise of his peak 1990 film, GoodFellas, reuniting the old gang of Robert De Niro and Joe Pesci from Raging Bull and Casino, while adding a likable Al Pacino (in, after all these years, his first Scorsese film) as doomed Teamsters boss Jimmy Hoffa.

Immensely long at three hours and thirty minutes, The Irishman still held my attention all the way through despite its lack of novelty. This is the best talent of the 1970s getting together in 2019 for one last hurrah…and not disappointing.

These 75-plus-year-olds (including Harvey Keitel from Scorsese’s 1970s films Mean Streets and Taxi Driver, plus Scorsese’s personal editrix, the 79-year-old Thelma Schoonmaker) aren’t doing anything new, but they are exceedingly skilled and well practiced. (Although there is much discussion lately of the luck of baby boomers, the most fortunate generation appears to be those born in 1940–46.)

The Irishman is one of the most imposing movies so far this year, along with the neo-Scorsesean Joker, the Korean Parasite, and of course Quentin Tarantino’s Once Upon a Time in Hollywood.

This picture might even be worth finding the time to see in a movie theater during its four-week limited-release window (a 7 p.m. show will get you out the door at 10:40). But if you can’t make it, The Irishman debuts on Netflix over the long Thanksgiving weekend.

De Niro has been a famous actor since his TV movie about a dying baseball player, Bang the Drum Slowly, 46 years ago. De Niro benefited from having an Italian surname during the peak era of Italian-American directors, but his ancestry is more generic Western European: He looks like the movie-star version of my Swiss-American father.

After a long run of serious leading-man roles, De Niro reinvented himself as a comic actor in 1988’s Midnight Run, just as his Deer Hunter costar Meryl Streep did about the same time. Eventually, however, Streep’s wider range of comedic invention proved more enduringly popular than De Niro’s repetitions.

“This is the best talent of the 1970s getting together in 2019 for one last hurrah…and not disappointing.”

Here he’s back to a largely serious role in the old manner, complete with his easily imitated grimace. It sounds uninviting, but it’s enjoyable to wallow once again in De Niro being De Niro as he plays Frank Sheeran, an Irish-American truck driver–turned–Teamsters functionary who had learned to speak Italian during his years fighting in Italy under General Patton. What can I say? The camera, especially Scorsese’s, loves Robert De Niro.

In contrast to De Niro, Pesci has had one of the briefest careers since Streep’s fiancé John Cazale appeared in exactly five movies before dying of cancer: as Fredo in the first two Godfathers, The Conversation, Dog Day Afternoon, and The Deer Hunter.

After making a major impression in a limited number of movies, including the hit comedies Home Alone and My Cousin Vinny, Pesci largely retired to the golf course in the late 1990s, with one memorable cameo in the De Niro-directed The Good Shepherd in 2006. In his first movie since 2010, he’s playing (very well, of course) the opposite of his hothead in GoodFellas: Russell Bufalino is the quiet, rational crime boss of a small Mob in northeastern Pennsylvania.

The Irishman is unusual in the Current Year for nobody insisting that Scorsese be canceled for making a 99 percent white movie. (The only nonwhite role is a Puerto Rican nurse in 2003 who has no clue who Jimmy Hoffa was.) So far, at least, nobody, not even The New Yorker, is demanding to know why Scorsese cast in the Hoffa role Al Pacino instead of, say, Gugu Mbatha-Raw.

Pacino plays Hoffa wonderfully as a comic, brave blowhard, whom De Niro’s small daughter instinctively (and rightly) prefers to Pesci’s sinister generosity. One long conversation toward the climax in which De Niro tries to make clear to Pacino the danger he is in might be an even better acting clinic than their face-off in Michael Mann’s 1996 Heat.

All three actors are, of course, far too old for their roles, so Netflix paid extravagantly for computer gimmickry to digitally de-age the stars. The $159 million budget is gigantic considering that this is otherwise an unflashy period piece about underworld figures who don’t live large (other than splurging on new American-made cars).

The de-aging process doesn’t really work yet: De Niro starts the movie, when he is supposed to be in his early 30s, looking about 55 rather than his current 76. While De Niro is no doubt spry for his age, Scorsese’s insistence that the 5’9″ star awkwardly clomp around in huge platform shoes to imitate Sheeran’s 6’4″ height doesn’t help the de-aging effect.

Hollywood, fortunately, no longer needs to use real chimpanzees in Planet of the Apes movies, but altering the age of human actors is still stuck in a slightly uncanny valley. So my 2012 proposal to ban child actors from movies and TV shows, to protect them from ills of early fame, and replace them with de-aged adults isn’t yet practicable.

The Irishman is based on a book by malpractice lawyer Charles Brandt, I Heard You Paint Houses, which claims to be the true story of the mobbed-up minor union boss Frank Sheeran (1920–2003).

Late in life, feeling guilty over not having provided a financial legacy for his four daughters, Sheeran started angling for a book contract by peddling various conspiracy theories about unsolved Mafia murders, such as the 1972 killing of gangster Crazy Joe Gallo (the subject of Jimmy Breslin’s The Gang That Couldn’t Shoot Straight and Bob Dylan’s song “Joey”), and the 1975 disappearance of union boss Jimmy Hoffa, the most notorious officially unsolved crime in recent history.

Sheeran and Brandt eventually snagged a publishing deal by propounding that Sheeran had personally rubbed out 25 or 30 men for the Mob and for Hoffa.

Did he really? I’d say the odds are likelier than the theory put forward in George Clooney’s Confessions of a Dangerous Mind that Gong Show creator Chuck Barris killed 33 people as a CIA assassin.

Also, Sheeran asserted that in mid-November 1963 he delivered rifles to David Ferrie, the alopecic New Orleans homosexual played (for once, badly) by Pesci in Oliver Stone’s JFK. And Sheeran claims to have used a little muscle to help get 29-year-old Joe Biden elected to the Senate in 1972. (Prudently, both stories are left out of the film.)

Sheeran’s original claim was that Hoffa was whacked by Vietnamese contract killers hired by the Nixon White House (which, by the way, no longer existed in 1975).

Eventually, Sheeran and Brandt appear to have settled on the allegation that Sheeran himself murdered his old pal Hoffa as part of an elaborate test of his Irish loyalty to the Italian Mafia.

Why the Mob would complicate their biggest hit of the 1970s by giving the gun to a Hoffa loyalist is hard to fathom.

Implausible as Sheeran’s claim may be historically, veteran screenwriter Steve Zaillian (Schindler’s List) turns it into a compelling slow-motion centerpiece for The Irishman reminiscent of the last half of The Godfather II in which Michael Corleone (Pacino) grimly resolves to have his brother Fredo killed.

Despite its length, The Irishman could actually use some expanded background on the Gallo episode, which traced back to the hilarious Italian-American Civil Rights League founded in 1970 by mafioso Joseph Colombo to protest the FBI arresting his son.

It soon became a sizable movement, with 45,000 dues-paying members and a Frank Sinatra benefit concert at Madison Square Garden. One triumph of the Italian-American Civil Rights League was bullying the late producer Robert Evans into agreeing that the word “Mafia” not appear in The Godfather.

Cancel culture has been around for a long time in one form or another. Prudently, Scorsese, a Sicilian-American altar boy from Little Italy, did not make a full-on Mafia movie until 1990, by which point Rudy Giuliani & Co. had largely gutted the Mafia.

But at an IACRL rally in 1971, Colombo was gunned down by a black shooter. According to The Irishman, suspicion turned toward Gallo, the most woke of the capos, who had hired blacks as soldiers and argued that the Cosa Nostra should mentor Harlem drug dealers.

In 1972 Gallo was murdered at a clam house in Little Italy.

Scorsese obviously finds the history of the Italian-American Civil Rights League amusing, but he recounts it so rapidly that nobody unfamiliar with this little-remembered slice of Americana could get offended enough to have him canceled.

The story of Hoffa, who was played formidably by Jack Nicholson in Danny DeVito’s 1992 movie Hoffa, is better known. He was the most famous union leader in America during his presidency of the Teamsters (1957–1971).

In these plutocratic days, it seems bizarre that back then tycoons had so little money and unions had so much that perhaps the most lavish golf-course construction project of the 1960s, Dean Martin’s Beverly Hills Country Club fiasco, was largely financed by the Teamsters’ pension fund. (Hoodlums skimmed so much it collapsed in ignominy.)

The historic downfall of American labor might have originated in Attorney General Robert F. Kennedy’s personal vendetta against Hoffa, who leaned toward Nixon rather than JFK in the 1960 election. RFK’s exposure of Hoffa’s frauds permanently damaged the respectability of organized labor, to the detriment of the Democrats in the 1980s.

RFK assumed that Hoffa, with his long-standing Mafia ties, was personally corrupting the Teamsters. But as it turned out in the late 1960s when Hoffa was in prison, it was perhaps more likely that Hoffa’s prestige and seemingly bulletproof confidence had been all that had been standing athwart the mobsters’ complete looting of the Teamsters’ treasury.

When Nixon pardoned Hoffa in 1971 (banning him from union activity until 1980), Hoffa began publicly agitating against corrupt Teamster loans to Mob-affiliated businesses. Eventually, on a day in 1975 when Hoffa was supposed to meet with some racketeers about their concerns over his anti-Mafia campaign, he disappeared.

His body has never been found.

In reality, the FBI likely has a fairly accurate idea exactly which goombah pulled the trigger, but to announce it would endanger the government’s old informants and its history of illegal wiretaps.