When the Future Was Faster 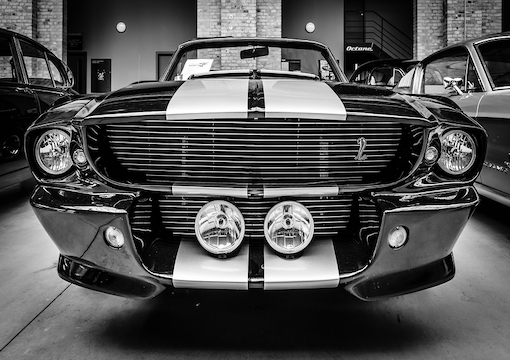 But what I saw is a devastating picture of the lack of diversity that permeated the industry in the 1960s…. Because ‘Ford v Ferrari’ shows a generation best left dead and gone.

Picture this: …men dominate the screen for 98% of the time, by my unofficial count. They are in the executive suites at Ford and Ferrari, in the workshops and garages in Venice, on the track out at Willow Springs Raceway. (And when I say men, I mean white, straight men.)

The critique I heard most often about ‘Once Upon a Time in Hollywood’ could easily apply here: This is a film celebrating those nostalgic golden days when white men ruled.

Being compared to the elysian Once Upon a Time in Hollywood isn’t actually the worst thing somebody can say about a movie.

Ford v Ferrari is the largely true story of the corporate rivalry to win the 24 Hours of Le Mans auto race during the Peak America years of 1963–1966.

The film’s concept had been in and out of development hell for decades, with names like Tom Cruise and Brad Pitt attached over the years. While Hollywood titans deliver tedious speeches at the Oscars about how much they care about social justice, the truth is that the best movies usually get made by guys who love fast cars, big explosions, and beautiful women.

Thus, the film industry has made countless auto-racing movies over the generations, even if the genre tends to be more hit-or-miss with fans than with the car-crazed stars and directors.

For example, the Ford v Ferrari screenplay borrows some of its literary symbolism about redlining from one of the great Howard Hawks’ last movies, his not-so-great 1965 racing film Red Line 7000.

Although moviegoers immediately forgot Red Line 7000, directors, such as Quentin Tarantino, have been kicking around for years the challenge of how to make a good Hawksian movie about a team of real men brawling and eventually uniting to go fast, with one cool gal (in this case, Caitrona Balfe as Mrs. Miles) to bravely urge her man on.

The challenge of delivering a Ford v Ferrari worthy of Hawks has finally been met by veteran director James Mangold (who made the Johnny Cash biopic Walk the Line and the proto-Joker comic-book drama Logan) from a screenplay by the Butterworth brothers. Ford v Ferrari is to Red Line 7000 what the entertaining Soderbergh-Clooney Ocean’s 11 is to Sinatra’s sleepy Ocean’s 11.

The Ford–Ferrari rivalry grew out of the postwar American desire to not just win The Big One and put a chicken in every pot and a car in every garage, but to also be competitive with the Old World in the more glamorous corners of culture.

For example, in 1958 Texan pianist Van Cliburn won the Tchaikovsky competition in Moscow, from which he came home to a ticker-tape parade on Broadway. The next year, fellow Texan Carroll Shelby drove an English Aston-Martin to victory at Le Mans.

Shelby then retired from driving due to his health (leading to a heart transplant in 1990, after which he lived to age 89 in 2012). He launched a rather Trump-like career of putting the Shelby name on fast cars and getting the Shelby name in glossy magazines, whether for his magnificent machines or for his incessant lawsuits.

Meanwhile, the late Ford executive Lee Iacocca (played by Jon Bernthal) was trying to make the Ford image less fuddy-duddy with the upcoming generation of privileged baby boomers by launching the Mustang semi–sports car and by persuading his boss, Henry Ford II, to purchase Ferrari, which won the Le Mans sports-car race from 1960 to 1965.

Steppenwolf playwright Tracy Letts has the most fun role as Ford II, the son of Edsel and grandson of the great Henry Ford, a big man who doesn’t have to censor his emotions because his name is on the factory.

But Enzo Ferrari wouldn’t cede final say over racing to Ford, so Ferrari called off the deal. Insulted, Henry the Deuce vowed to bury Enzo at the finish line at Le Mans. But could the giant American corporation that had invented the moving assembly line in 1913 match the handmade nimbleness of the most legendary Italian performance marque? Mid-century American capitalist culture was great at bigness, but would Ford beat Ferrari at building cars as works of art?

Mr. Ford hired the maverick Shelby to optimize the Ford GT40 supercar to win Le Mans for him. (The name stands for “Grand Touring” and the number for the height of the car in inches: Back then, everybody assumed that the vehicles of the future would be ever lower.)

But that led to no end of office politics as Shelby and his brusque driver Miles clashed with the Ford Motor Company’s organization men, such as the movie’s designated villain, executive Leo Beebe (played unctuously by Josh Lucas). The script offers some sharp insights into how bureaucracies naturally try to smother innovation.

Oddly enough, Bale had been previously slated to play Enzo Ferrari in Michael Mann’s proposed Ferrari biopic, but he dropped out because he didn’t want to fatten up so much.

In Ford v Ferrari, Bale is in his skinny live-wire mode, like his Oscar role in The Fighter. It takes audiences a while to work out his character’s thick Birmingham accent, but eventually they grow fond of his prickly personality. My wife said she thought she’d be bored by a racing film, but she liked how Bale talked to his car while driving, turning it into a relationship movie.

If you enjoy loud cars-go-vroom noises, see it in a theater with good speakers. If you don’t, wait until you can watch it at home with closed captions to help you follow the often technical dialogue shouted over the roar of a 425-horsepower V8.

The only adjustment was to drop all mention of Shelby’s lurid love life (he was married seven times) and concentrate solely upon Miles’ decorous marriage.

The movie is full of talk of “redlining,” for instance, but it’s about the risk of burning out the engine by revving it over 7000 RPM, not about discriminatory FHA loans.

No nonwhite or nonmale characters were concocted to make the history more palatable to today’s anti-white-male prejudices.

In summary, straight white men just keep ruining things for everybody else by having more talent and getting more done.