Can Mayor Buttplug Save the Democrats? 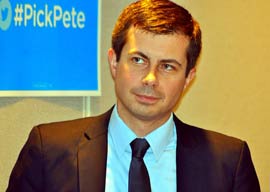 Can a gay man whose surname begins with the word “Butt” become America’s next president?

Say hello to Pete Buttigieg, who is so kind and helpful that his Twitter page phoneticizes his Maltese surname as “BOOT-edge-edge” so you don’t have to spend half a day trying to figure out how to pronounce it. Because his last name is so ridiculously inscrutable, many prefer to simply call him “Mayor Pete.” Buttigieg is the out-and-proud mayor of South Bend, IN, who declared his candidacy for president yesterday amid a wave of hype touting him as “the hottest thing in politics.” Almost entirely unknown a month ago, recent polls show him trailing only Joe Biden and Bernie Sanders in a cluttered field of Democratic candidates.

Biden is a straight white male, which is a severe liability in the modern Democratic milieu, even though he bends over backwards apologizing for it. Sanders is Jewish but suffers the misfortune of existing in a climate where Jews are still largely considered white—they have yet to fully shake that stigma.

Both Biden and Sanders are also in their late 70s and are seeking to appeal to an increasingly youthful demographic. There’s also Beto O’Rourke, who’s much younger than those doddering septuagenarians but then again is saddled with the ignominy of being a straight white male.

Like O’Rourke, Buttigieg is young—if elected, he’d become the youngest president ever—but what sets him apart from the rest of the Democrats’ unfashionably white males is that he is gay. Therefore, even though he’s Harvard-educated and independently wealthy, he’s “oppressed.” And in the modern Democratic Party, you’re not a winner unless you’re a loser, at least in historical terms.

I mean, he doesn’t merely engage in sexual activities that Leviticus declares to be an abomination before the Lord Jehovah. He plays piano, harmonica, and guitar. He speaks eight languages and allegedly learned Norwegian just so he could read a novel. He’s a Rhodes scholar and an Afghanistan war vet. He refers to himself as “definitely the only left-handed, Maltese American Episcopalian gay millennial war veteran in the race.”

So it’s not as if engaging in sodomitical relations with his legal husband is the man’s only selling point; it’s definitely the main one that they’re pushing, though.

As far as his policy positions go, I’m not sure he actually has any. He’s in favor of universal healthcare, as if that distinguishes him from the 300 or so other freaks who are running for the Democratic nomination. He apparently likes the environment. He thinks organized labor is cool; on the other hand, he doesn’t think wealth inequality is cool at all. School shootings? Mayor Pete doesn’t like ‘em. Legalized abortions? Likes ‘em. Bike lanes? Likes them, too. Corporations? Nah. Pollution? Double nah, because corporations cause it.

“For the Democrats, who seem to be gearing up for a 2020 platform that doesn’t stray far beyond “White Males Suck,” here’s a white male who literally sucks—and they’re making it his main selling point.”

See if you can find anything that anyone on Planet Earth has said throughout history that is more vague than this public statement from Mayor Buttplug:

What matters is our everyday life, and our everyday life is subject to the decisions that are being made by people with power over our life, and that’s what elections are all about…So many other things matter, especially having a sense of who you are and what you care about….This generation, if nothing changes, could be the first in American history to earn less than our parents if we don’t do something different. So let’s do something different….We can’t just polish off a system so broken. It is a season for boldness and a focus on the future.

Dude just blew my mind as hard as he probably blows his husband.

Is all that vapidly feel-good verbiage any more profound that Obama’s “hope” and “change” sloganeering that bewitched the public back in 2008? Is there any quantitative difference between Pete Buttigieg and Barack Obama besides the fact that Pete has less melanin and is married to someone who is confirmed to be a man?

Try as hard as I do to be aggressively homophobic, I’m not even sure whether being a rump-wrangler has much to do with one’s managerial skills and political vision. But for the Democrats, who seem to be gearing up for a 2020 platform that doesn’t stray far beyond “White Males Suck,” here’s a white male who literally sucks—and they’re making it his main selling point.

You see, it’s important that Mayor Pete likes having sex with other men. Despite the monstrous deficit, the endless foreign wars, the looming doom that is automation, the lack of any cultural or social glue that’s keeping the nation from spinning out of control, the totalitarian lurch toward speech suppression and thought control, what the country really needs right now—more than anything, I swear—is having a guy in the White House who has sex with another guy in the White House. It’s important because of, you know, history and oppression and hatred and the fact that the country is too divided.

Like all of his other white-male competitors, Buttigieg has bowed down, kissed the ring, and admitted that he enjoys unearned and unfair white privilege, but he wants you to forgive him because, well, because he likes penises.

But because we’re dealing with leftists—who are never satisfied until the ship points Due Left and falls off the edge of this flat Earth—and already there are bitchy murmurs of whether Buttigieg is “gay enough.”

A recent op-ed in something called The Outline laments that “Mayor Pete
might be the most palatable gay man in America,” and “That’s precisely the problem”:

There is a certain kind of gay guy. He is very likely white. He would say that he is in his “mid-thirties,” although he is much closer to the end than to the beginning of his last credibly young decade. Older women think he is handsome; younger men are not so sure. He is a professional of some kind — not ostentatiously wealthy, but comfortable enough to take the occasional ski trip in Colorado or spring vacation in Spain. He probably enjoys “the theater.” He is sure to mention at some point that he likes to read.

The article then goes on to chastise Buttigieg for making a huge point of the fact that he met his super-gay hubby through a dating site called Hinge—which welcomes straights as well as gays—rather than the low-T-cell-count gay hookup app called Grindr.

You can’t win with these people. And that’s why, barring a sudden flash of insight among Democrats or Donald Trump’s untimely death, the Democrats will lose in 2020.