When White Male Candidates Campaign Against the Idea of “White Males” 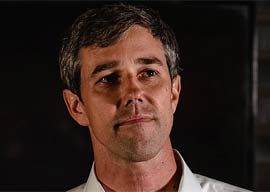 According to a recent poll, Joe Biden and Beto O’Rourke stand first and fourth amid the ocean of weird-ass Democrats who are potential nominees for president.

The problem, though: They’re both white.

This wouldn’t ordinarily be a problem, except I get the sense that the main message the Democratic Party wants to push on the American public in 2020 is that white guys suck.

Accordingly, Biden and O’Rourke are scrambling to contain and neutralize their respective White Guy Problems.

Last week while speaking at an event which attempted to peddle the idea that college campuses are hornets’ nests of rape, Biden blamed white guys.

To this day I regret I couldn’t come up with a way to give her the kind of hearing she deserved. But I also realized there was a real and perceived problem the [Senate Judiciary] committee faced: They’re a bunch of white guys. No, I mean it sincerely — a bunch of white guys…hearing this testimony. So…when Anita Hill came to testify, she faced a committee that didn’t fully understand what the hell it was all about.

I think I understand what this is all about—it’s all about a white guy who didn’t used to have a problem with white guys but now knows he can’t run for president as a Democrat without openly declaring that the pesky problem that underlies everything is white guys.

“Is there anything less enjoyable than hearing white people apologize for enjoying white privilege?”

In his tireless quest to pimp the demonstrably false idea that rape is a thing that white guys do more than anyone else, he blamed the “white man’s culture” for the idea that the term “rule of thumb” emerged from some English law that said a man was allowed to beat his wife with any stick that wasn’t thicker than his thumb—a complete fantasy that was revealed to be a myth by Christina Hoff Sommers in her book Who Stole Feminism?

Describing sexual assault, Biden claimed it was “about the abuse of power.”

Regarding sexual assault, he robotically repeated the inherently nonsensical mantra, “It’s not about sex. It’s about power.”

Great. Care to explain all the penises and vaginas? And care to explain why you seem to think sex has nothing do to with power—or even why sex and power might not be synonymous?

But if it’s really about the “abuse of power,” what says Uncle Joe about all the pictures of him creeping out with clearly uncomfortable women, whispering, spooning, groping, canoodling, and pawing like a “creepy uncle”?

While Biden was flapping his wrinkled lips about white guys and their rape culture, a Latina politician came forward recently to describe the incident with Biden that made her wish that Earth would open up and swallow her whole:

I felt him get closer to me from behind. He leaned further in and inhaled my hair. I was mortified. I thought to myself, “I didn’t wash my hair today and the vice-president of the United States is smelling it. And also, what in the actual fuck? Why is the vice-president of the United States smelling my hair?” He proceeded to plant a big slow kiss on the back of my head. My brain couldn’t process what was happening.

I don’t belong to either party so I don’t really have a pit bull in this here demolition derby, but for all that the Democrats denounce “rape culture,” they seem to have most of the actual rapists.

You have to watch out for the finger-pointers. It almost always seems to be a sign of guilt.

What also works against Biden’s new image as an anti-white-guy white guy is his history of saying things about black people long ago that would be considered violently racist today because he failed to blame white guys for everything.

To rectify his unforgivable and electorally problematic white-guyness, Biden’s advisers are urging him to choose the hideous charcoal stegosaurus Stacey Abrams as his running mate, a hulking, gap-toothed, mini-dreadlocked black woman who is known for little more than being a fat, unattractive Negress who says disparaging things about white guys. Whether or not she will peg him on live TV during the Democratic National Convention to seal the presidency is yet to be seen.

For his part, Beto O’Rourke—who was born Robert Francis O’Rourke but whose parents nicknamed him Beto during infancy in order to make him sound more Spanish, no kidding—admits that he’s a white guy but wants to make it clear that he is in no way cool with it:

As a white man who has had privileges that others could not depend on, or take for granted, I’ve clearly had advantages over the course of my life
….The government at all levels is overly represented by white men. That’s part of the problem, and I’m a white man. So if I were to run, I think it’s just so important that those who would comprise my team looked like this country….But I totally understand people who will make a decision based on the fact that almost every single one of our presidents has been a white man, and they want something different for this country. And I think that’s a very legitimate basis upon which to make a decision.

When O’Rourke got into trouble—because the world is so ridiculous these days, you get into trouble for saying entirely benign things—after quipping that his wife is raising their three children “sometimes with my help”—he again blamed his alleged blunder on being a white guy:

Not only will I not say that again, but I’ll be more thoughtful going forward in the way that I talk about our marriage, and also the way in which I acknowledge the truth of the criticism that I have enjoyed white privilege.

Is there anything less enjoyable than hearing white people apologize for enjoying white privilege?

Despite the fact that O’Rourke says that NFL players are heroic for protesting the idea that white cops are roaming the streets and gunning down black males with impunity—yet another idea that is so statistically false that one should fart on it wherever they encounter it—black critics scoff, accuse him of “whitesplaining,” and say it’s obvious that he’s such a clueless white guy, he doesn’t even realize he’s going to have to do a lot more than that.

For any nonwhites and all white women who vote Democrat, it appears obvious that they’ll go for anyone who isn’t a white guy—Bernie Sanders or Kamala Harris, for example.

Therefore, the only constituency that Biden and O’Rourke will appeal to on election day are white guys who think that white guys suck—and even then, a lot of that demographic will also be eager to vote for anything that doesn’t have a white penis.