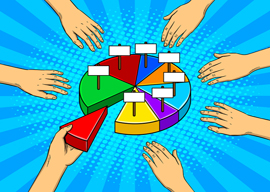 Do identity politics truly represent “the demand for dignity,” as centrist political philosopher Francis Fukuyama asserts in the subtitle of his new book, Identity: The Demand for Dignity and the Politics of Resentment?

Personally, “dignity” would strike me as an odd characterization of such recent manifestations of identity politics as your local gay pride parade, Ferguson’s bouts of undocumented shopping, Bruce Jenner in a ball gown, or the Asia Argento vs. Rose McGowan #MeToo spat. Nor do I expect the upcoming Supreme Court nomination hearing/teen sex comedy to be a high point in the history of American dignity.

If I were looking for an alliterative subtitle, I might try instead “The Demand for Dominance.” Contemporary identity politics seem far less about Jackie Robinson maintaining a stiff upper lip as he demonstrates his right to play baseball than about Serena Williams feeling entitled to go off on the tennis umpire.

In the current year, we seem well down the road to diminishing marginal returns in identity politics. It has less and less to do with equality of rights and more to do with hunger for acclaim. Celebrities have figured out that the social constructionist dogmas taught in college, such as “representation,” can serve to bolster their bank accounts. Identity politics increasingly are manipulated by celebrities into getting softheaded fans to believe that if only, say, Beyoncé were to win all the Grammys, then boys will think I’m pretty instead of that awful Becky with the good hair.

Similarly, Hillary Clinton’s main argument for electing her president seemed to be to get vengeance on your ex-husband or ex-boss. Thus, Hillary made her anchor arguments in the first two debates Donald Trump’s fat-shaming of scandal-plagued telenovela actress Alicia Machado in 1996.

Interestingly, some potential identity-politics categories simply don’t exist in modern America. For example, although Hillary was convinced that condemning Trump for fat-shaming a woman was going to put her in the White House, “short-shaming” men isn’t even a word. Our society indulges in quite a bit of pointless derision of short men for their genetic shortcomings, but nobody cares. Further, most American sports—such as basketball, baseball, and football—are strikingly biased toward the tall, but there’s negligible interest in reforming the rules in the interests of equality.

“In the current year, we seem well down the road to diminishing marginal returns in identity politics.”

What this all has to do with dignity is left unexplained by Fukuyama. Identity turns out to be fairly reasonable if you read all the way to the end, but the initial bulk of the book consists of Fukuyama going to undignified lengths to assure the politically correct that he’s not going to do any of the crimethinking he sneaks in later on.

For most of the book, Fukuyama claims that the real danger in leftist identity politics lies in rightist “politics of resentment” in which native working classes ask for trade and immigration policies that would allow them to earn enough from their labor to afford to have families. You might think that would represent the old notion of the “dignity of labor,” and Fukuyama ultimately hints that he does too. But he mostly sticks to his safe framework of good leftist dignity vs. bad rightist resentment.

Nor does it strike me as particularly dignified that the hegemony of identity politics means that an intelligent man like Dr. Fukuyama feels compelled to repeatedly genuflect in front of bully boys like Black Lives Matter, who have gotten thousands of incremental blacks murdered by other blacks in their four years of existence.

Today, recognized identity-politics groups of privilege can’t be publicly blamed for anything, such as mentioning that blacks have very high homicide rates or that gay liberation unleashed AIDS. The identity unprivileged—the cishet white males—must shoulder all the blame. Hence, white privilege is to blame for crime, and Ronald Reagan caused AIDS.

Bowing down to political correctness doesn’t strike me as terribly dignified in an intellectual. Reading Identity reminded me of what Theodore Dalrymple said:

…the purpose of communist propaganda was not to persuade or convince, not to inform, but to humiliate; and therefore, the less it corresponded to reality the better…. I think if you examine political correctness, it has the same effect and is intended to.

On the other hand, Dr. Fukuyama, author of the 1992 book The End of History and the Last Man, has enjoyed quite a career for a Hegel expert by knowing how to be just the right amount controversial. Thus, he ends his new book’s preface with the Zillow-tastic locations where he wrote it:

Fukuyama is most famous for predicting “the end of history” during the Gorbachev era. This has kept Fukuyama’s name alive in the higher-brow journals as other writers love to point out snippily that history has not ended. But as Fukuyama notes, he was merely predicting the end of Marxist history:

Karl Marx had suggested that the end of history would be a communist utopia, and I was simply suggesting that Hegel’s version, where development resulted in a liberal state linked to a market economy, was the more plausible outcome.

On the other hand, history seems to have recently accelerated in a different direction. Before the French Revolution, history was less about ideology than about invasions, and we seem to be going back to the old days. Fukuyama points to Brexit and Trump in 2016, but the deeper you read into his book, the more Identity turns out to be about the cause of the upheavals of 2016: the vast hegira of Muslims into Europe that the German chancellor invited in 2015.

This whimsical decision has been effectively memory-holed by the lack of a catchy name for it. (In fact, Fukuyama misdates it to 2014 on page 132.) So let me suggest “Merkel’s Mistake” as the moniker for the moment when globalist elites dropped the mask and revealed what was coming if citizens didn’t stand up for their nations.

For almost all of Identity, Fukuyama attacks anybody who favors immigration limitation as a deplorable. He devotes considerable space to criticizing the different policies that European countries have adopted in dealing with their Muslim immigrants, without showing any evidence that, say, jus soli vs. jus sanguinis matters. Instead, Occam’s razor suggests that the size of the Muslim problem in any Western country is related simply to their number and average IQ.

And yet on page 174, ten pages from the end, no doubt long after many reviewers have stopped reading, Fukuyama finally works up the courage to point out that countries ought to limit immigration: Restricting the number of immigrants would encourage them to assimilate, relieve stress on public institutions, and make jobs more available.

As a matter of political philosophy of relevance to immigration policy, Fukuyama argues that the United States Constitution fails to define adequately who “We, the People” are:

But what country are they trying to take back? The U.S. Constitution begins with the statement: “We, the People of the United States in Order to form a more perfect Union, establish Justice, insure domestic Tranquility, provide for the common defence, promote the general Welfare, and secure the Blessings of Liberty to ourselves and our Posterity, do ordain and establish this Constitution for the United States of America.”… But it does not define who the people are, or on what basis individuals are to be included in the national community. This silence in the American Constitution raises some important questions…. The American Constitution’s failure to define who the American people are reflects a broader problem for all liberal democracies.

Actually, the Preamble that Fukuyama quotes is explicit that the point of the Constitution is to benefit “ourselves and our posterity.”

I occasionally wondered while reading Identity if there is a whiff of self-parody about the frequent lapses of logic in it.

Late in his book, Fukuyama comes around to agreeing that nations do have the right to let in or keep out whom they choose.

A straightforward reading of the Preamble doesn’t mean that American citizenship ought to be restricted to DNA descendants of citizens in 1788. A simple analogy to corporate shareholding implies that current citizens have the right to allow in new citizens, or to keep them out, as they democratically decide. (Due to identity politics, this, however, is increasingly considered racist and thus anti-democratic.) Those they let become citizens become “ourselves and our Posterity” as well.

In particular, corporate officers have a fiduciary obligation to current shareholders not to create new shareholders too cheaply (as our elected officials so often do with the right to live in America). As I wrote in 2005, my crusty old corporate finance professor asked in 1981:

“If you were running a publicly traded company, would it be acceptable for you to create new stock and sell it for less than it was worth?”

“Sure,” I confidently announced. “Our duty is to maximize our stockholders’ wealth, and while selling the stock for less than it’s worth would harm our current shareholders, it would benefit our new shareholders who buy the underpriced stock, so it all comes out in the wash. Right?”

“Wrong!” He thundered. “Your obligation is to your current stockholders, not to somebody who might buy the stock in the future.”

Although the 22-year-old me had never thought about it, this subtle but important logical distinction between current shareholders (or citizens) and future shareholders (or citizens) is not a particularly difficult concept to grasp once you’ve had it explained to you. (It is so obvious once stated that it drove open-borders economist Bryan Caplan into a paroxysm of rage when he heard it because he didn’t have a good response.)

But it almost never comes up in American politics, and Fukuyama doesn’t give any indication he’s ever thought about it.

Perhaps if our famous philosophers thought about such basic questions American discourse would be more dignified?