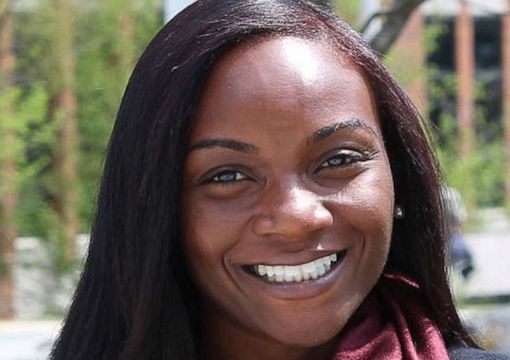 If I were Dr. Kizzmekia Corbett, I’d cool it with the boasting. I’m a bit more weathered and wizened than the 34-year-old immunologist currently being touted as the “curer of Covid,” and one lesson I’ve gleaned from my many years on this earth is that life loves comedic setups and satisfying punchlines. Opinion assholes like myself wouldn’t have material if not for the ironic twists and expertly delivered sight gags that spring up organically and with such regularity in daily life.

Life wrote that joke; I just told it.

Or my story from 2018 about “Diversity Bridge,” the massive Miami highway overpass that was constructed to great fanfare by a team of female and nonwhite “engineers,” in what was hailed as an example of “doin’ it without the white man.” And then the bridge collapsed, killing six innocent motorists.

All I did was read that one off the cue cards.

“This is a massively tempting setup for one of life’s trademark comedy bits.”

Now, knowing life’s love of farce, only a fool would tempt fate by setting herself up for ironic comeuppance.

Which brings us to Dr. Kizzmekia “Kizzy” Corbett, or “Dr. Kizzy,” as she likes to be called. Dr. Kizzy is an immunologist with the National Institutes of Health, and this year she’s been part of the team working on a vaccine for Covid. More specifically, she’s been involved with the vaccine being developed by Moderna (as opposed to the Pfizer one that came out first).

And boy, do all the right people want you to believe that Kizzy is the Covid savior.

“Dr. Fauci wants people to know that one of the lead scientists who developed the Covid-19 vaccine is a Black woman,” screamed CNN. “Dr. Kizzmekia Corbett—Why You Should Know Her Name” read the Yahoo News headline. “History books will celebrate the name and achievements of Dr. Kizzmekia Corbett, the Black Woman who was the leader in developing the COVID-19 vaccine,” bleated Barbara Arnwine, president of a tumorous waste of space known as the Transformative Justice Coalition. And the National Newspaper Publishers Association wire service proclaimed, “A Black woman, Dr. Kizzmekia Corbett, developed the scientific approach to the Coronavirus vaccine.”

Yes, she developed the “scientific approach.” Prior to her, the lab was filled with white men banging pots and pans together yelling, “Die, virus!”

“One of the key scientists behind the Moderna vaccine is Dr. Kizzmekia Corbett, a 34-year-old Black woman who will go down in history as one of the leading figures to help end this pandemic,” tweeted Hillary Clinton last week, as every major network news show ran “Kizzy saved us” stories.

In truth, Dr. Kizzy was part of a team and (by her own admission) worked under a white dude, but in an age of “uplifting” media frauds ranging from the exaggerated (Hidden Figures) to the completely invented (The Aeronauts), facts don’t matter nearly as much as putting the “right” color and gender at the forefront.

And this is a massively tempting setup for one of life’s trademark comedy bits. It’s a banana peel on an icy sidewalk, a riotously funny accident waiting to occur. Because after building Kizzy up as the “mother of the Moderna vaccine,” after making a huge deal out of “a black woman gave us this,” what’s gonna happen if the vaccine creates a generation of thalidomide ’tards? As it is, the Moderna vaccine damn near killed a Boston health-care worker who received it the day after Christmas.

A few more negative outcomes like that, and watch how fast the media demotes Kizzy from magical black woman to voiceless waif who sat in the back of the room as white men recklessly plowed ahead with a dangerous vaccine.

I’d recommend Kizzy sign that movie deal now, with cash up front, before the gag plays out.

Mind you, even without a punchline, the Kizzy farce has already produced many moments of hilarity. She was first trotted out to an uncaring nation back in April, when the NIH for some odd reason thought Americans would better accept the incipient lockdowns and economic devastation if we knew a jive-talkin’ black woman was on the case (Kiz iz a self-described weave-wearing “vernacular”-usin’ sassy mama).

Initially, Fox News showered Kizzy with glowing praise, pointing out how wonderful it is that a “brilliant black woman” who is “proudly Christian” is leading the push for a vaccine. “She has long been called a superstar scientist,” the April 16 Fox profile crowed, as the network’s helicopters dropped flag pins, Bibles, and Thomas Sowell books over locked-down cities with a reminder that we all bleed red and diversity is our strength.

The joy was short-lived. The very next day, Tucker Carlson ran a piece about how this “proud Christian’s” Twitter feed was filled with tons of the usual white-men-bashing social justice bullshittery.

Even more troubling, and this is something Tuck didn’t mention (probably because he was peddling his own kooky coronavirus conspiracy stories at the time), Doc Kizzy was spreading Covid-origin falsehoods, telling her followers “China didn’t do anything wrong” and “It is important that we not stigmatize people who may be from areas where the virus starts. It could very well have been in the United States.” When one of her followers suggested that the disease might have come from an American truck driver in the “upper Midwest,” Kizzy replied, “I would not be surprised if we discover the virus has been here for some time earlier than our current initial case from China (Seattle case). So yes…I think it’s possible.”

“Superstar scientist”? Poor Fox…they were hoping for a Larry Elder, and they ended up with a Larry Fine.

In the wake of the controversy, Dr. Kizzy, of her own accord or under orders from her superiors, started keeping a low profile, even making her Twitter account private. And the nation kinda forgot about the black woman who was saving us all. Like Shirley Hemphill and so many sassy sitcom foils before her, she became a distant memory.

Until two weeks ago. That’s when Fauci the Great decided to trot Kizzy out again, to ensure that black Americans accept the vaccine, because apparently the dumb ol’ darkies only understand condescension. “To my African American brothers and sisters, this vaccine that you’re going to be taking was developed by an African American woman. And that is just a fact,” Fauci told the National Urban League last week, before donning a kufi cap and shouting, “Slap my hand, black soul man!”

And just like that, Kizzy was in the news again. But this time there was a crawdad in the Courvoisier. Professional angry black man Tariq Nasheed, who’d clashed with Kizzy back in April over old tweets that he claimed demonstrated a disrespectful attitude toward black men, was not happy to see her return to the spotlight. “They are trying to wheel Dr. Kizzmekia Corbett back out,” Nasheed tweeted several weeks ago. He repeated an accusation he first made in April, that Kizzy’s a government tool being used to deliver a deadly “vaccine” that will “Three the Hard Way” mass-genocide American blacks: “The fact that they keep emphasizing her Blackness is a red flag. They alway [sic] use Black ppl as trojan [sic] horses for their agenda.”

To prove his point, Nasheed posted a photo of Kizzy sitting next to a white man. Devastating evidence!

As I said, it’s all a farce, every player a clown. And here’s the payoff: After Nasheed tweeted his suspicions about the vaccine, his black followers flooded the thread with comments about how they will refuse to take the “eugenics” vaccine, with one follower even tweeting a drawing of a black person slitting the throat of a white doctor trying to administer it. And Dr. Kizzy replied to those black skeptics with the same line, again and again: “I (we) will keep our vaccine from u & anyone else opposed.” Yes, the woman being used by Fauci to win over black people who are opposed to the vaccine is telling black people who are opposed to the vaccine that it will be withheld from them (and the “we” part makes it appear as though she’s speaking on behalf of the NIH and Moderna).

Fauci: as good a judge of character as he is a doctor.

Can you imagine the uproar if a white government scientist repeatedly told black Americans, “I (we) will keep our vaccine from u”? There’d be no saving that poor bastard from being fired, canceled, and possibly brought up on hate-crimes charges. Indeed, all black fatalities from Covid following that white guy’s tweet would be blamed on him. “Those blacks would’ve gotten the vaccine had that Nazi racist not said he was withholding it from them.”

To be clear, I’m not arguing that Kizzy should be canceled. As my regular readers know, I’m 100% and at all times against punishment for “speech crimes.” If Kizzy’s vaccine births a horde of ectrodactylous droolers, cancel her for that. But not for words. In fact, what I hope comes out of this is that the Moderna vaccine works great and maybe, just maybe, people on the left can finally accept that somebody can be perfectly good at their job, even an important, demanding, and very complex job, while at the same time tweeting out stupid, offensive, or factually questionable things.

When high-IQ white dudes get canceled (or intimidated into silence) for their opinions, or their tweets, or their offhanded comments, or their fucking shirts, what is lost to society is immeasurable. My goal would not be to cancel Kizzy but to use her as an example of why someone who is good at their job should not be dismissed for saying the wrong thing, or even an objectively bad thing (and “I (we) will keep our vaccine from u” is an objectively bad thing). Sure, Kizzy should most likely be shelved as government point-person for persuading blacks to take the vaccine. But regarding her actual job, immunologist, if she’s good at it—and I have no reason to doubt that she is—her offensive words shouldn’t matter.

I’d take a hundred Kizzys cooking up my meds if, in exchange, whites could have the same freedom to speak their minds, express their opinions, and even occasionally say a wrong thing.

But in the words of Voice of the Beehive, “These are just wishes, and I am just dreaming.” The Kizzy Follies will come and go and no one will learn jack squat.

Still, as this is my final column of the year, why not say goodbye to 2020 with a wish, even if an impossible one?