Fear of an Alpha Female, Afraid of a Spinster Daughter, and Terrified He’ll Never Pop the Question 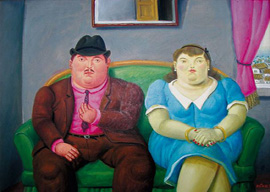 Man and Woman by Fernando Botero

FEAR OF AN ALPHA FEMALE

I am a 53-year-old man at the very start of a relationship with a very beautiful, affluent, and powerful woman. The problem is that I think she may be too spoiled to handle the truth—this woman has been “Yes’d” to death by sycophants and hangers-on for the majority of her life, and I fear she is not going to put up with my very direct and truthful ways. I really like her and I want to get more involved, but I fear she will never even consider me as a serious option because I don’t buy into aiding and abetting the wealthy simply because they are wealthy. What can I do? Should I walk away now and save myself the rejection?

Have you considered that maybe a hint of your ego wants to reject the affluent, powerful, and pretty woman just so you can say you did? It sounds like you are worried about yourself getting hurt. It sounds as if you are maybe a bit intimidated as well. And people wonder why the good ones tend to go for the asshole! Well, because the good guys usually can neither stomach the battle nor the thought of loss. Take one for the good-guy team: Do yourself a favor and jump in. Do you really expect to be able to avoid heartbreak? Even a mousy, unsuccessful, and poor woman could break your heart. Women, as long as they are not lesbians, like nothing more than a man—and a “man” is not someone who is worried about being on time to his mani-pedi on Friday morning. So if she is giving you the time of day, stick with it and don’t be a chicken.

“Women, as long as they are not lesbians, like nothing more than a man.”

If your courage needs a pep talk, go rent Braveheart; that humble clansman saw his wife raped and murdered and he not only caused the king to throw his son’s lover out the window as if swatting a pesky mosquito (maybe the best movie scene of all time), he caused so much upheaval and emotional disturbance that he was publicly disemboweled. It may be historically inaccurate, but it is an inspirational movie. So pluck up, find some courage, and keep moving forward. None of this philosophical, self-preserving gibberish.

AFRAID OF A SPINSTER DAUGHTER

My daughter is 28 and I am worried she is never going to find a husband. I have set her up with many suitable men—and just so there is no confusion, by “suitable” I mean rich—but she never follows through. Worse still, she will not give up on this ragamuffin-type male she has known since she was ten, even though he wants nothing to do with her. What should I do help her find/pick the right man? I want her to find a young Mister before she becomes an old spinster! Help!

—Want a Wedding in Westminster