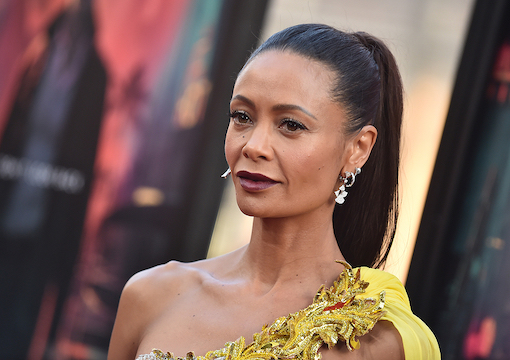 Once again, my timing was spot-on and a mile off. Last week’s column was about how, in Hollywood, Jews are now considered “white” by the blacks who’ve been affirmative-actioned into positions of power due to hiring quotas (for nonwhites) and caps (for whites).

The very morning my piece posted, Zuni fetish doll Whoopi Goldberg got herself into a cannibal pot of hot water during her daily chicken-coop livestream of clucking morons by insisting that the Holocaust was a “white-on-white” crime, because Jews are “white” and when Nazis called them a separate race they were “lying” (hey, Nazis aren’t racist after all!).

I foresaw this, but I didn’t. In 2018 I wrote about how “leftist Jews are working overtime to flood this country with brown folks who see them as white, and the Holocaust as white-on-white crime.” And in 2019 I warned of “an America awash in Third Worlders who dismiss Jews as white and the Holocaust as a ‘white on white’ problem.”

“It’s a story about the left’s rotating View Master slides regarding how to perceive race.”

My mistake was focusing solely on Third Worlders. Thanks to post-Floydian acceleration, black Americans (including a venerable celebrity) are taking that line now too.

In a hastily scheduled Colbert non-apology appearance, Whoopi declared that race gotta be visual. “I think of race as being something that I can see. So I see you and know what race you are,” she uglysplained. “[The Holocaust] wasn’t based on skin. You couldn’t tell who was Jewish. You had to delve deeply and figure it out. The Nazis were white people and most of the people they were attacking were white people. So to me, I’m thinking, ‘How can you say it’s about race when you’re fighting each other?’”

Everyone’s making this into a Holocaust controversy, because of course they are. But it isn’t. It’s a story about the left’s rotating View Master slides regarding how to perceive race. Pundits are picking sides (“Whoopi was right!” “Whoopi was wrong!”), but the story is that these multiple perceptions exist.

So let’s examine them:

(1) Race is a social construct. There is no race; whites invented the concept as an excuse to enslave others. This is the interpretation Adam Serwer chose in his Atlantic piece defending Whoopi (Serwer is half Jew/half black, with the looks of the former and the IQ of the latter, because even genes love irony): “Race is not real.” “The United States invented race” as “a biological fiction.”

Who gravitates toward this interpretation? People of color who have a pathological insecurity that they’ve been awarded the booby prize in the DNA lottery, so for their own psychological well-being they dismiss DNA entirely (this is why you’ll never hear a Chinaman or Jap spout that line; they like their DNA, so they’d never deny its existence). Also, this interpretation is favored by those who reject DNA but still want to present themselves as an oppressed minority. Race doesn’t exist, but white people pretend it does. Therefore, even though race is a fiction, whites make the persecution real.

The blame thus shifts from nature to whitey.

Of course, under this interpretation, Whoopi was wrong. If the Nazis treated Jews as a race, then the Jews were victims of racism.

(2) Race is what you see. This is the perception favored by blue-black mofos who’ve grown up self-conscious of their skin color. Most of these chronic light-absorbers suffered a childhood of ridicule at the hands of light-skinned blacks. Dark-skinned blacks hate it when their former playground tormentors claim to be “just as oppressed.”

The problem (for blacks) with the visually based interpretation is that it lets whites off the hook by lumping them in with the high-yellas—it makes both groups equally guilty of hatin’ on the darkies—and thus it absolves whiteness of possessing the unique sin of racism. Plus, as light-skinned blacks tend to be the more “adept” ones, more likely to be competing for STEM or corporate gigs, it’s vital (for them) to be able to scream “racism” to get a strategic leg up on the competition. “Racism is visual” robs them of that advantage.

Which brings us to No. 3: the one-drop rule. This is the one that lets the light-skinned get in on the fun. Some of the best race hustlers in recent history—Shaun King, Jesse Williams, Meghan Markle, and my old (dead) friend David Mills—do the “one-drop” thing because it’s literally their only way to be black. The beauty of the “one-drop rule” is that near-whites can blame white-whites for “forcing” them to obsess about race. “Hey, whitey, you came up with the one-drop rule. I’d love to get past race, but because of this rule (that only I’m keeping alive), I simply can’t. Damn you, whitey!”

The one-drop rule is also invoked by “white Hispanics” to claim their affirmative-action prize. “Sure, I look like Raquel Welch, but I’m one-quarter Hispanic on my mother’s side and there might be some Afro-Cuban in there somewhere from like a hundred years ago so give me all the free shit!”

“One-drop” is slightly similar to “social construct” except that whereas the latter dismisses race entirely (to the extent of even dismissing the science regarding race-predominant diseases like sickle cell or Tay-Sachs), the former does recognize “racial blood,” but blames whitey for making a big deal out of it.

These three perceptions play a major role in how Hollywood’s new racial cap-and-quota rules are being navigated. To Whoopi, high priestess of “race is what you see,” it’s all about the skin. As she told Colbert, “When the Klan is coming down the street and I’m standing with a Jewish friend—I’m going to run. But if my friend decides not to run, they’ll get passed by most times, because you can’t tell most times” (does this ever actually happen to her? Whoopi Goldberg and Woody Allen strolling through NoHo and the Klan charges them? A story like that makes even Jussie Smollett go, “Holy shit that’s fake”).

It’s instructive to study Whoopi’s “Klan standard.” If the KKK chases you, you’re nonwhite. If the KKK passes you by, you’re white (never mention the fact that the Klan had a long history of being anti-Irish). Jews aside, where does the “Klan standard” leave Hispanics, a group that Hollywood covets not because, like blacks, they threaten to burn down the studios, but because, due to sheer numbers, Hollywood sees a profitability factor that will only grow over time?

So under Whoopi’s Klan standard, Hispanics—especially the attractive ones who try to make it in Hollywood—would not qualify as an oppressed race, any more than Jews.

And here’s where we get to the essence of why, eventually, Hollywood’s racial cap-and-quota system will fail. The system is run squarely on the “one-drop” interpretation. The Jessica Albas and Nathalie Kelleys are considered just as “kept down by race” (and thus in need of quotas) as the Gabourey Sidibes and Leslie Joneses.

Just last week, light-skinned British-born actress Thandiwe Newton told the AP that even though dark-skinned black women see her as privileged, “it’s precisely the prejudice that I’ve received from African-American women more than anyone else” that allows her to emotionally understand racial oppression and thus play roles that otherwise might’ve gone to dark-skinned actresses.

Well, you kinda screwed yourselves on that one, Jemima. If you’d just been nicer to Newton, you wouldn’t be out a job.

In her interview, Newton broke down crying as she tearfully apologized to “darker-skinned actresses” for being the “chosen” and for “taking their men, taking their work.”

Wanna guess how that went over with the black Anguses? A pampered, privileged light-skinned British actress telling dark-skinned American blacks, “Sorry I took your men”?

She might as well have been a McDonald’s worker telling them, “Your fries aren’t ready yet.”

Time for a brawl!

The cap-and-quota system will implode because its adherence to the one-drop rule is pitting big black mamas, who demand that the set-asides go to “Klan-runners,” against everyone who actually has to make a living producing films, who want the quotas to go to light-skinned one-droppers, because movie audiences from whites to the Chinese to black men would rather look at Nathalie Emmanuel than drag-queen Yaphet Kotto.

Add to that—and this is something no one else is talking about—the fact that talent agents are not subject to the caps and quotas (which apply only to production jobs, and agenting isn’t in that category). So agents will remain primarily white and largely Jewish. And from Hollywood’s earliest days one of the perks of being an agent is meeting beautiful women. Over the past few months, I’ve shopped three pristine young blond actresses, ages 18 to 21, to talent agents, who were heartbroken that they couldn’t sign them. At the moment, such actors are deadwood (if a young unknown white actress can’t claim “one drop,” there are no jobs for her).

Taking young blondes away from agents is like having your boss remove the doughnuts and coffee from the break room and replace them with okra and tap water. Sure, you can still do your work, but a little bit of joy has been removed from your day.

Still, the news is not all grim. The Whoopis with their “Klan-runner” standard will inevitably bring on a color-bar civil war with the Thandiwes, and the Thandiwes, having been treated like princesses since childhood, unaccustomed to being told “no” by man or beast, will refuse to back down. The struggle will thus redirect from white vs. black to black vs. black, and everyone in the business who wants the doughnuts back in the break room will start sneaking them in as the “bosses” are arguing.

Plus, Whoopi herself inadvertently drove a massive coffin nail into the caps-and-quotas scheme by claiming that Jews can’t encounter racial discrimination, thus forcing everyone in the biz to take the counter-position. This will make it a lot harder to cap Hollywood Jews, and honestly, keeping Joshy and Isaac in charge of things will be a prime factor in eventually bringing back the blondes.

To paraphrase a fine Jewish actor, white will, uhhhh, find a way.

P.S. Last week I promised to tell the story of the Jew, the shiksa, and the million-dollar tranny. Whoopi’s shenanigans robbed me of the space. Subscribe to my YouTube channel, and I’ll tell the anecdote in my next video.