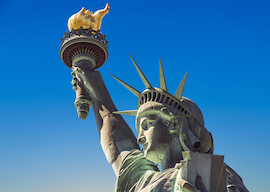 Respectable opinion is trending toward once again viewing “segregation” as the great problem afflicting America.

For example, Senator Kamala Harris is demanding another round of busing in order to use white children to integrate distant schools. (Amusingly, back during the 1970s busing fad, Kamala’s husband, crack Los Angeles lawyer Douglas Emhoff, appears to have white-flighted to exurban Agoura High School out near Malibu Canyon.)

But one obvious problem is that America is running out of white students. While whites made up 84.5 percent of public school students in 1970, according to a 2014 Pew Research Center forecast America’s public schools will be only 46.2 percent white in the coming school year.

Even though the top of Chetty’s rankings for best counties in the U.S. are dominated by virtually all-white places in the northern Great Plains and Great Basin, he still blames “segregation” for bad outcomes. That leads him to call for more programs to move inner-city blacks to whiter neighborhoods.

“We’re running out of time to continue playing Let’s Pretend.”

For example, Chetty has tracked down what would be the last working-class white neighborhood within the city of Charlotte, East Forest, and is demanding slum blacks be moved there so he can find out if having white neighbors (at least until they flee) solves welfare blacks’ problems.

Of course, there aren’t many such white working-class refuges left in urban America to use in Chetty’s integration experiments. For instance, Chetty’s designated victim hood, East Forest, is today only 28 percent white.

One obvious policy response to The Establishment’s need for more white people to use in integration schemes would be to reform the immigration system to bring in more of that much-demanded commodity: whites.

For example, the U.S. could recruit Boer families fleeing the high rate of racist violence tolerated by the South African regime.

Or the government could merely adopt objective Big Data measures for assessing the potential impact of immigration applicants, such as their likelihood of evading taxes, going on welfare, being entitled to affirmative action, committing violent crime, drunk driving, littering, and so forth. Rather than dream up ever more ingenious ways to ruin your neighborhood’s property values, Professor Chetty could use his data-crunching skills to figure out how the U.S. could let in only the most beneficial would-be immigrants.

Many sensible immigration reforms would likely lead to a higher percentage of whites being allowed to immigrate, which would somewhat ameliorate Senator Harris’ craving for white children to bus and Professor Chetty’s hunger for white neighbors to absorb the dysfunctions of poor blacks.

And yet reforming the immigration system in a manner that would increase white immigration is considered unspeakable in today’s intellectual world.

For example, there was a recent conference on “National Conservatism” in Washington where one of the speakers was the brilliant Penn law professor and neurologist Amy L. Wax.

As a legal scholar, Wax is well aware of the concept of disparate or adverse impact discrimination in which policies that inadvertently have a negative impact on a protected group can be ruled discriminatory even without disparate treatment by race.

Disparate impact originated in the Supreme Court’s 1971 Griggs case in which a utility company giving an IQ test to job applicants was ruled to be discriminating because blacks average lower scores.

Griggs didn’t outright ban the use of cognitive tests in employment, but did make them more difficult to justify to the EEOC without augmenting them with racial quotas. As Wax wrote in 2012:

Contrary to the Supreme Court’s assumption in Griggs, the comparative power of IQ extends even to relatively uncomplicated positions requiring modest skills, such as clerical or retail work. What this means is that hiring on the basis of intelligence—as opposed to other, non-cognitive personal attributes or talents—will almost always produce better-performing workers…. The paucity of non-Asian minorities in competitive positions reflects real differences in human capital and skill.

Similarly, just about any rational reform to our system of selecting immigrants, such as adding an IQ test, would have disparate impact by race.

Wax specifically argues for orienting immigration policy around what she calls “cultural-distance nationalism,” in which America would prefer immigrants from cultural backgrounds more like those of historic America. As she wrote in her 2018 Georgetown Law Review article calling for a less intellectually childish debate over immigration policy, “Debating Immigration Restriction: The Case for Low and Slow”:

…if we want to preserve our country’s culture and signal strengths, it follows that we should favor newcomers who are “more like us.”

More broadly, we must ensure that bad habits from the Third World—lack of respect for law, rampant corruption and kleptocracy, despotism, weak markets, insecure property rights, lassitude, lack of enterprise, tribalism, superstition, distrust, rampant violence, misogyny, and unreason—are not allowed to infect and undermine the First.

As a resident of the San Fernando Valley, which has been inundated by ex-Soviets, I’d add that Second Worlders from Eastern Europe don’t always bring the neighborliest customs either.

But Wax is well aware that selecting immigrants for cultural compatibility (or for any other desirable criteria) would have disparate impact by race and thus be inevitably demonized as racist, even by conventional conservatives:

Embracing cultural-distance nationalism means, in effect, taking the position that our country will be better off with more whites and fewer nonwhites. Well, that is the result, anyway. So, even if our immigration philosophy is grounded firmly in cultural concerns…. And, no matter how many times we repeat the mantra that correlation is not causation, these racial dimensions are enough to spook conservatives.

Pundits were indeed enormously spooked, denouncing Wax for all sorts of sins against the Prime Directive of the zeitgeist, which is that whites will never, ever discriminate.

At the National Conservatism conference, Wax eloquently summed up:

That fear leads conservatives to avoid talking about cultural distance, or questioning the happy fantasy of “magic dirt,” or discussing forthrightly the practical difficulties of importing large numbers of people from backwards states into successful ones. And as long as these taboos exist, and acceptable mainstream conservatives defer to them, it will be hard—maybe impossible—to change course.

But we’re running out of time to continue playing Let’s Pretend:

Our country’s future trajectory, however, will not be determined by political correctness but by reality and facts on whether cultural differences really matter, whether they are stubborn, and whether they have consequences. And by the time that that becomes clear, and plays out, it may be too late to turn the ship.

Hilariously, the conventional wisdom was especially outraged by Wax’s contention that the diverse tend to litter more:

One of my pet peeves, one of my obsessions, is litter. If you go up to Stockbridge, Massachusetts, or Yankee territory, versus other places that are quote-unquote more diverse, you are going to see an enormous difference, I’m sorry to report. Generalizations are not very pleasant. But little things like that aren’t little. They really affect our environment.

Of course, this is true. Latinos litter.

For example, in Southern California, littering Latinos have trashed some of the loveliest natural sites, such as the Rock Pool in Malibu Canyon, Stoney Point in Chatsworth (the historic origin of California rock climbing), and the East Fork of the San Gabriel River.

Yet, littering is one of the problems most amenable to the kind of social engineering that progressives claim to favor. Americans had a big problem with littering in the postwar era when wrappers, such as from McDonald’s, increased enormously in number. In response, the long Keep America Beautiful campaign culminated with the famous 1971 “Crying Indian” TV commercial that successfully racially shamed Americans into cutting back on littering.

But nobody would dare racially shame Latinos today for their bad manners in throwing their trash on the ground. It’s just not done.

Another clear problem being caused by immigration is an increase in tax evasion.

For example, in 2006 I served on a jury in a simpleminded tax scam perpetrated by a clan of Iranian used-car dealers. The brains of the operation, a guy so crooked he’d been banned for life from the used-car profession (think about that), had gotten back in the game by having his brother-in-law sign all the legal forms to be the nominal CEO of their new car lot.

The hidden partner then sent off to Sacramento only half the $4 million in sales tax he collected from customers, spending the rest on his San Clemente golf course McMansion.

But, it turns out, the state of California employs auditors to catch you when you do that. Eventually, Mr. Big fled back to Iran, leaving his fall-guy brother-in-law to take the fall.

But when we got into the jury room, the only other juror with a high enough IQ to have understood the testimony was a Bulgarian immigrant used-car dealer, and he sure wasn’t going to vote to convict somebody over some American obsession about paying your taxes.

Interestingly, our Big Data era makes feasible a far more sophisticated system of selecting the best immigrants, which could utilize both individual differences, as the Canadian and Australian policies do, and demonstrated national tendencies. Just as, say, Harvard doesn’t assume that all high school GPAs are equally valid, but knows from experience that straight A’s from Stuyvesant or Harvard-Westlake are more impressive than straight A’s from Manual Arts, it would make sense to adjust for cultural propensities.

One smart criterion for choosing immigrants might be whether you are more likely to make a good spouse for an American, both because immigrants who marry Americans are likely to assimilate more thoroughly and because helping Americans marry is a good thing.

We should look for nationalities where the gender gap in intermarriage rate is close to nil. For example, East Asian immigrant women are much in demand by American men, but American women don’t think too much of East Asian immigrant men. This leads to Bitter Asian Men. Similarly, the greater demand for black men leads to Angry Black Women.

My impression is that the greatest equality of intermarriage is found among Europeans.

How to evaluate immigrants would be a far more useful project for a data maestro like Chetty to undertake than his long, futile search for the Magic Dirt.

Ironically, this “National Conservatism” gathering in our capital was hosted by Yoram Hazony, author of The Virtue of Nationalism, who is an Israeli political philosopher.

“Today, we celebrate our Independence Day!”

Perhaps someday in the distant future the patriotic intellectuals of our own Republic will be ready to thank our Israeli friends for their help, while noting that we Americans are now finally able to celebrate our own independence day.