The Success of Israeli Nationalism 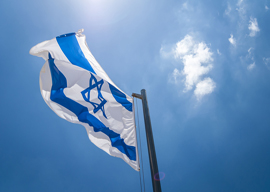 Israel is one of the intellectually freer nations, which helps explain how an Israeli political philosopher, Yoram Hazony, has suddenly established himself as perhaps the most interesting thinker of the post–Merkel’s Mistake era with his spectacular new book, The Virtue of Nationalism.

With Israel being nationalism’s prime success story in recent decades, this Israeli nationalist is well positioned to offer a resounding intellectual justification to his fellow nationalists in America, Britain, and the Netherlands. Israel is one of the rare nation-states where nationalism is not demonized by elites, so its defense attracts more elite talent than in the West. Hazony explains:

I have been a Jewish nationalist, a Zionist, all my life…. My family came to Jewish Palestine in the 1920s and early 1930s with the aim of establishing an independent Jewish state there. They succeeded, and I have lived most of my life in a country that was established by nationalists, and has been governed largely by nationalists to this day…. Among them, nationalism is not some unfathomable political illness that periodically takes over countries for no good reason and to no good end, as many in America and Britain seem to think these days.

In contrast, North Atlantic intellectuals have largely been employed in molding minds in support of two vast neo-imperial projects, the European Union and the new world order imposed by the air supremacy of American bombers. Hazony points out that imperialist intellectuals, such as the late neoconservative Charles Krauthammer with his Latin term “pax Americana,” are consciously drawing upon the imperial tradition of their models: Rome, Austro-Hungary, and Westminster.

…almost all public discussion of these efforts was conducted in a murky newspeak riddled with euphemisms such as “new world order” “ever-closer union,” “openness,” “globalization,” “global governance,” “pooled sovereignty,” “rules-based order,” “universal jurisdiction,” “international community,” “liberal internationalism,” “transnationalism,”…“the right side of history,” “the end of history,” and so on. All of this endured for a generation—until finally the meaning of these phrases began to be clear to a broad public….

And brought us Brexit and Trump.

Hazony, an American-educated Israeli academic and former Netanyahu aide, is a Modern Orthodox Jew, the Jewish persuasion that perhaps optimally balances social conservatism with intellectual curiosity. (The downside of Modern Orthodoxy is that it’s very expensive.) Hazony has nine children, which may help explain his disdain for the current year’s conventional wisdom.

He has a quotable prose style that reminds me a little of G.K. Chesterton, the unbelievably quick-witted English newspaper philosopher. In a century of trying, nobody has come close to Chesterton’s mastery of paradox, but Hazony sometimes is in the running. For example:

The nationalist, we may say, knows two very large things, and maintains them both in his soul at the same time: He knows that there is great truth and beauty in his own national traditions and in his own loyalty to them; and yet he also knows that they are not the sum of human knowledge, for there is also truth and beauty to be found elsewhere, which his own nation does not possess…. I say that this tension is a very great virtue in any individual….

“We’ve all read more than enough on Israel’s problems. For once, we are getting a sympathetic Israeli view on our problems.”

Like Chesterton, Hazony has a knack for high-speed philosophizing that draws upon a sometimes stylized set of empirical examples. He leaves me both rushing to get to his next insight while simultaneously wishing he’d slow down and show his work. (In his voluminous endnotes, he sets a more leisurely pace.)

In opposition to nationalism is the growing cult of globalism or universal cosmopolitanism or liberal democracy, all of which Hazony pejoratively labels imperialism. To Hazony, liberal imperialism embodies censoriousness, rage, and childish dependency upon authority:

…universal salvation theories—of which the pursuit of a universal liberal empire is today the most influential—work relentlessly to establish conformity…not only among the nations that are subjected to them, but also in the soul of the individual.

From his redoubt at the Herzl Institute in Jerusalem, Hazony laughs:

But the universities are hardly the principal locus of rage against views now deemed inappropriate…. [The] Western democracies are rapidly becoming one big university campus.

The principle of national freedom represents the golden mean of compromise between the extremes of feudal anarchy and empire.

In Western history, at least, imperialism has tended to be associated with a rationalist theory of knowledge…. Nationalism, on the other hand, has tended to be based on an empirical standpoint, exercising a moderate skepticism with regard to the products of human reason….

Enlightenment philosopher Immanuel Kant might be the patron saint of the European Union, while conservative political philosopher Edmund Burke tends to appeal to its skeptics. (Alternatively, one could view Burke’s attempt to elicit pan-European upper-class resistance to the French Revolution as transnationalism avant la lettre.)

Dogmatic and utopian, [liberal imperialism] assumes that the final truths concerning mankind’s fate have long since been discovered, and that all that remains is to find a way to impose them…. But as the opponents of liberalism have been vanquished one by one, and universal liberal empire has seemed to come within reach…leaving a dogmatic imperialism as the dominant voice with the liberal camp—a voice that has rapidly taken on the worst features of the medieval Catholic empire upon which it is unwittingly modeled, including a doctrine of infallibility, as well as a taste for the inquisition and the index.

In Hazony’s biased but interesting view of history, the Catholic Church, as the inheritor of the Roman Empire, was the enemy of nationalism. (As Paul Johnson pointed out in Modern Times admiringly, most of the postwar founders of what became the E.U., such as Jean Monnet, Robert Schuman, Konrad Adenauer, and Alcide De Gasperi, were Catholics who looked back and forward to a more united Christendom.) Hazony ignores the crucial role the Catholic Church played in helping Dark Age Europe move beyond clannishness and toward nationalism by outlawing cousin marriage.

As an extremely intelligent Jew, Hazony is instead a fan of the pro-Semitic nationalist Protestants of Netherlands, England, and America “between Henry VIII and the American revolution.” They looked back to Old Testament Hebrews as a role model of a nation getting out from under an empire. Like John Quincy Adams, Hebrew prophets wanted Israel to be a light unto the nations, but weren’t terribly interested in ruling the rest of the world.

In this view, the modern world more or less originated with the Dutch nationalist rebellion against the Spanish Empire in 1568. In the 17th-century Dutch Republic’s golden age, the influence of enterprising Sephardic Jews who fled Iberia after 1492 shouldn’t be exaggerated, but it’s not negligible.

Then, in 1688, King William of Orange brought advanced Dutch bourgeois policies to England, which modernized that ancient nation-state. Nor is it wholly a coincidence that today’s world capital of finance, Wall Street, is located in what was once New Amsterdam. This profitable progress was intimately related to anti-imperial nationalism and tolerance for Jews.

To Hazony, imperialism can be blamed for most bad things, such as World War I, which he attributes less to nationalism than to the spectacular growth of the overseas British and French empires setting off a reaction in Germany. Berlin’s strategists in 1914 saw an onrushing end to the old Westphalian nation-state system of limited rivalries, in which, say, Prussia and Denmark would battle for a few months and then redraw the border. Instead, a few imperial “world states” would eventually struggle for global domination. The General Staff saw Germany’s main chance to be one of those competitors for world power residing in destroying the French army in the west and conquering the Slavic lands of the German diaspora in the east.

Ambitiously, Hazony even labels Hitler an imperialist rather than a nationalist, which depends upon his claim that nationalism historically “inculcates an aversion to the conquest of foreign nations.”

It’s true that wise nationalists have sometimes seen the disadvantages of conquering dense populations of foreign peoples. In the 1890s, many of America’s best men—such as Mark Twain, William James, and Andrew Carnegie—spoke out against the new imperialism that has left America saddled 120 years later with Puerto Rico.

But the real reason that nationalism is less likely to lead to war these days than in the past is that military conquest just doesn’t pay anymore. Merely defeating barbarians in Afghanistan in a permanent way seems to be something the incredibly expensive American military can’t do. And then what would it gain us to conquer the Hindu Kush?

Similarly, most nations these days don’t see much profit in occupying anybody. It’s telling that in the great schism that emerged in conservative ranks over whether to invade Iraq in 2003, the transnationalist neocons were pro-war, while the losing Buchananite nationalists such as myself tended to be against America’s profitless “war for no oil.”

Perhaps the real danger of war in the near future stems from a topic that Hazony barely mentions: dynasticism. If, say, Xi Jinping were looking for an excuse to make his daughter his automatic successor, he might attempt to conquer Taiwan so that in the rapturous aftermath he could declare himself emperor of China.

Moreover, Hazony barely mentions immigration, a topic upon which American Jews have sentimentally whipped themselves into a schmaltzy frenzy while Israeli Jews have remained hardheaded.

A cynic would note that many of Hazony’s views could be interpreted as ingenious special pleading for Israel. The author is explicitly concerned that the zeitgeist among supporters of the E.U. is growing increasingly anti-Zionist. (Of course, an unabashed nationalism might make more sense in Israel’s neighborhood than in, say, the Low Countries. Luxembourg, Belgium, and the Netherlands just don’t hate each other the way Israel, Syria, and Lebanon do.)

And Hazony sidesteps much of the inconvenient subject of Palestinian nationalism.

But we’ve all read more than enough on Israel’s problems. For once, we are getting a sympathetic Israeli view on our problems.