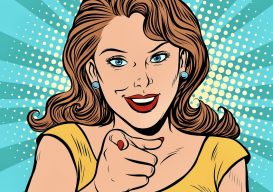 It’s been a long time since I’ve felt fear. Back in the 1990s, when the Jewish Defense League was actively trying to kill me, I experienced many flashes of raw, visceral fear. But after the threat from the JDL passed, that was about it. It would be a long time before I’d once again feel any genuine measure of fear or panic.

Which brings me to a few weeks ago.

I was having a night out in Culver City with a friend from out of town. After frequenting a couple of bars, we stopped in an alley so I could show him one of the city’s more ludicrous curiosities—a nightclub that is a literal hole in the wall. Several years ago, a restaurant called Rocco’s decided, because why not, to turn a couple of cramped back rooms abutting an alley and trash dumpster into a nightclub the size of a minibus. All it took was a red velvet rope, a tall bouncer in a fancy suit, headache-inducing music, and a pitch-black atmosphere, and voilà, you have a magnet for morons, who dutifully show up every night to be squished into a glorified closet.

So my friend and I were hanging out in the alley, enjoying the sight of well-dressed dumb-asses lining up to spend a night in an Auschwitz standing cell, and my pal started vaping, because that’s just what you do these days. It was a marijuana vape stick, which is legal here now, not that it wasn’t every bit as common prior to legalization. And these two club girls, one black, one Latina, both I would say in their late 20s, came up to us. “Yo, can I get a hit on that vape, man?” the black girl asked. Soon enough, both ladies were vaping away, and I—who neither smokes pot nor found either girl even the least bit attractive—began longing for my next drink.

For whatever reason, the Latina—drunk and high—began getting way too close to me, backing me into a wall. “Djoo got a gurfriend? Djoo got more weed?” I became increasingly uncomfortable. I have nothing against Latinas (some of the most beautiful women I’ve ever known have been Latina), but this was one of those “ay mami papi mami papi ay yi yi” barrio Latinas, and I was not digging her getting so close to me. As her face got unfortunately nearer, I tried to think of how I could push her back in the most gentle and nonsexual way possible. So I took my index finger and very, very gently touched her forehead, saying, “Hey, let’s stay in our own space, okay?”

Well, that tiny tap changed her demeanor quickly. “Did djoo jus’ touch me? NOBODY touch me! Djoo no touch me! I geev djoo no right to touch me.”

And at that moment, I felt fear again. Because in today’s climate, I’d just committed rape. My fucking life flashed before my eyes. I foresaw cops, a cell, and hefty legal bills.

I decided I had one way out. I promised the girl that I would pay for an entire night of drinks at the hole-in-the-wall club for her and her friend. “Drinks on me until closing, as

“In a nutshell, this is why normal folks don’t take identity politics seriously.”

a way of making up for this terrible crime I have committed against you and all of womankind.”

“Okay, djoo better,” she replied, before telling her friend, “Hey, mami, he gon’ buy us drinks all night!” The two ladies rushed toward the club, as my friend and I followed. The bouncer let the two girls in immediately. I attempted to follow…only to be told by the bouncer, “No shorts allowed.” Indeed, as I almost always do, I was wearing shorts. And the bouncer made it clear—this pretentious closet of a nightclub does not allow shorts on guys (perhaps to reduce the gay vibe of so many men crushed up against one another in the dark).

I immediately saw my exit strategy. “No shorts allowed? Oh, dang it, drat the luck,” I replied. “Mami papi” had long disappeared into the darkness of the room, shoving her way past a sea of retarded sardines to reach the bar. So, having been denied entry, I began a hasty retreat. “Wait,” the bouncer called out, suddenly realizing that I was the drink-buyer for the two girls who’d entered before me. “Maybe I can make an exception in your case.” “Oh, no, good sir,” I said. “Rules are rules, and far be it for me, as a man dedicated to law and order and the upkeep of Western civilization, to ever defy the rules of propriety!”

And with that, my friend and I were gone. I never saw “mami papi girl” again, but I’ll always remember that brief, fleeting flash of terror.

So I genuinely feel bad for Jeremiah Harvey. Jeremiah is a 9-year-old black child who was falsely accused of sexual assault in New York last week. Jeremiah was out with his mom, shopping at a Brooklyn convenience store, lugging around a big ol’ backpack filled with his New York City-approved textbooks (White People: Scourge, Curse, or Both by Tariq Nasheed, Sometimes the Bitch Be Askin’ for It by Keith Ellison, and How to Live Like a Communist on Only $20 Million a Year by Michael Moore). And as Jeremiah, his head full of dreams of curing cancer and sending robots to Mars, walked through the store, his backpack brushed against the ass of a woman named Teresa Klein.

To be clear, Jeremiah’s backpack did indeed knock against Klein’s backside. And she genuinely did believe that she’d been groped. But as the store’s security-camera footage would subsequently show, it was completely unintentional, and the boy was not even aware that anything had happened. Until, that is, Klein called the cops, claiming to have been “sexually assaulted” (her exact words) by young Jeremiah. Klein, her actions recorded by bystanders, launched into a tirade outside the convenience story, declaring over and over again, “I have been sexually assaulted.”

Okay, maybe the fact that I remember political controversies that go back beyond seven days makes me some sort of superhero (“Memory Man! Able to retain information for longer than a week!”), but didn’t we just get lectured by the left about how we always have to “believe the woman” because “women don’t lie” about sexual assault? And now we have leftists telling us that a woman lied about sexual assault.

It’s not easy being Memory Man. He lives a lonely, sad, drunken life.

No more than two weeks since the Kavanaugh spectacle, during which Americans were ordered to believe in recovered memories and magical rape trains that, like the Great Gazoo, can only be seen by one woman and are invisible to everyone else, leftists are now lining up to attack a woman who mistakenly thought she’d been sexually assaulted. On The Daily Show, Trevor Noah stated that even if the black kid had grabbed Klein’s ass, she should not have called the cops. This is from a guy who two weeks ago was soapboxing about how no allegation of sexual assault is too old and no perpetrator too young. In The Boston Globe, Jeneé Osterheldt railed against the suggestion that Klein can ever be forgiven for her mistaken allegation. Klein’s actions “are not forgivable,” Osterheldt declared. And in the ultimate kicker, The Philadelphia Inquirer’s Solomon Jones demanded that Klein not only lose her job, but her “freedom”! Yes, he wants her arrested and locked up for having mistaken a child’s backpack for a grabbing hand.

Teresa Klein honestly did think that she’d been groped (it wasn’t a calculated false claim like the one I wrote about two weeks ago). And, after reviewing the store security-camera footage, she apologized to the boy. And what did black leftists like Noah, Osterheldt, and Solomon say in response? She should not be forgiven, she should be arrested for calling the police about an assault that she genuinely believed took place, and even if she had been groped, she should have let it go.

In the Jeremiah Harvey/Teresa Klein case, we see what I call “intersectional Deminism,” the crossroads where all the various Democrat victim groups clash. And it’s a terrible intersection, one that cars enter specifically to crash. A white woman recovers a memory of a white man holding her down on a bed at a party thirty years ago, and it’s the end of the world as we know it! The man must be hanged from the tallest tree! A white/Jewish woman feels her ass bumped by something as a young black kid passes behind her, and, in total sincerity (though in a hugely over-the-top manner), she claims that the black kid fondled her. Now she’s the one who must be lynched, and a leading black pundit declares that even if she had been groped, she should have just lived with it, taken it, stayed silent, and kept her objections to herself.

Meanwhile Klein, who is almost certainly Jewish, is slammed by the media as a racist “white woman,” even though in the viral video of the incident, she screams at an intruding bystander and calls her a “white woman,” leading Trevor Noah to ask on the aforementioned Daily Show episode, “Why would a white lady call another white lady a white lady as if she weren’t white herself?” prompting every Jew in America to slap their collective foreheads and yell at the TV, “Please don’t raise issues like that, you stupid little kushi.”

Add to the mix the suggestion that Klein is apparently (based on statements from her neighbors) mentally ill, raising the specter of a disabled person being held up for ridicule by “sensitive, compassionate” liberals, and the gang’s all here! Race, ethnicity, religion, feminism, and disability. Welcome to the intersection, morons. I’ll call the tow truck.

In a nutshell, this is why normal folks don’t take identity politics seriously. It’s a realm of loons, people with disjointed minds. People who neither notice nor care about logic and contradictions. Sadly, though, as dumb as it is, it’s a force to be reckoned with in today’s America. Which is why I had that flash of panic when I touched the drunken Latina’s forehead. My skin color versus hers, I’d be the villain. No Trevor Noah would come to my aid, saying that a gentle, defensive boop to the forehead isn’t an arrest-worthy offense. I’d have been a monster and a sex criminal, and I’m forever grateful to that bouncer for unwittingly giving me a path of retreat.

It’s not always easy to navigate the left’s SJW maze, but if you know the winning and losing hands (straight flush beats full house, black and Latino beats Jew, Jew beats white Christian), you can at least know when to go all-in, and when to flee the table.