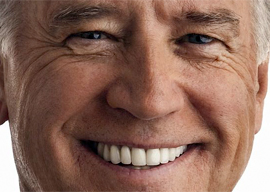 “I want to be clear—I’m not going nuts,” Joe Biden assured a crowd in New Hampshire last Friday.

It was merely the latest in a lifetime of lies this serial fabulist has told. ALL of the available evidence proves that he is clearly going nuts.

Perhaps part of it is due to the pressure of being an old white man who’s posing as the standard-bearer of a political party whose sole agenda these days is the extermination and debasement of old white men. How taxing must it be to run on the premise of, “Well, sure, everything I represent sucks, but at least I acknowledge it, so vote for me, anyway”? I could see how that could take its toll on a fella.

But most of it is due to the fact that he has always been a liar who jumbled the facts, compounded by a septuagenarian brain that is rapidly fermenting.

Biden is often referred to as a “gaffe machine,” and although that’s accurate, it doesn’t tell the whole story. A gaffe, by definition, is an unintentional mistake. There was the time when, in front of a crowd, he told wheelchair-bound Missouri state senator Chuck Graham to stand up. There was the time he called Barack Obama the “first sorta mainstream African American who is articulate and bright and clean and a nice-looking guy.” Those are simply dumb, clumsy mistakes.

But throughout his career, he has also blatantly lied about himself:

• He claimed he finished in the top half of his law-school class; he actually finished 76th out of 85.

• He has repeatedly claimed that both he and members of his family were coal miners. He even plagiarized sections of a speech from British politician Neil Kinnock about how his ancestors would work in the coal mines for 12 hours and then come up to play football for four hours. He was ultimately forced to admit he was lying.

• He plagiarized portions of a law-school essay so extensively he had to beg administrators not to expel him.

• He implied that Osama bin Laden’s men “forced down” his helicopter in Afghanistan, when the truth is that the pilot landed safely as a precaution to avoid a snowstorm.

• He claims he was “shot at” in Iraq, when the truth is that a mortar landed several football fields away from where he was safely ensconced in a Baghdad motel.

• He claims he participated in sit-ins and boycotts during the Civil Rights era and then was later forced to acknowledge that, no, he didn’t do any of that, although he did briefly work at a predominantly black swimming pool.

“These days, every time he opens his mouth he becomes a walking commercial for Alzheimer’s medication.”

And just last week while recalling the time he attempted to pin a medal on a war hero, he got so many facts wrong that even The Washington Post took notice:

In the space of three minutes, Biden got the time period, the location, the heroic act, the type of medal, the military branch and the rank of the recipient wrong, as well as his own role in the ceremony.

Maybe it has something to do with the two brain aneurysms he suffered way back in 1988 combined with the fact that he officially became a senior citizen almost a dozen years ago, but these days, every time he opens his mouth he becomes a walking commercial for Alzheimer’s medication.

Even though his handlers seem desperately engaged in ensuring that Biden hardly ever says anything in public, he’s made the following aircraft-carrier-sized mistakes since declaring his candidacy this spring:

• He claimed that alleged Russian election meddling in 2016 would never have happened on his and Barack Obama’s watch, although they were the only president and vice president able to watch in 2016.

• He mistook New Hampshire for Vermont, although many of us do that. He also confused Burlington, IA for Burlington, VT.

• He claimed that he met with student survivors of the Parkland shooting while he was vice president, even though the shooting occurred over a year after he left office.

• He told a crowd, “We choose truth over facts.”

• During a debate, he referred to Cory Booker as the president. He also said the country can’t afford “eight more years” of Donald Trump.

• He said MLK and RFK were both assassinated in the late 70s; in reality, they were both shot in 1968.

• He said over 40 students were shot in the Kent State Massacre; in the real world, four were killed and nine others injured.

• Despite the fact that many white kids are poor and that poor kids tend not to be bright, he told a crowd that “poor kids are just as bright and just as talented as white kids.”

• He referred to the recent shootings in El Paso and Dayton as “the tragic events in Houston today and also in Michigan.”

• He told debate viewers, “Go to Joe 3-0-3-3-0,” which confused everyone because no such web address nor geographical location exists.

• He referred to the G7 summit as the G8 summit.

• He misattributed an MLK quote to Barack Obama, although maybe they all look alike to him.

• Most disturbingly of all, he forgot Barack Obama’s name last week.

True to form, Donald Trump has already pounced on Biden’s flagrant senility, dubbing him “Sleepy Joe” and saying he has “truly lost his fastball.” Biden’s wife Jill, who has dealt up close and personal with his fake teeth and fake hair longer than anyone, is urging people to overlook his countless shortcomings, “swallow a little bit,” and vote for him anyway, because he’s the only one who has a chance of beating Donald Trump.

Democrats are faced with an unenviable choice: Either support a pathological liar whose brain is falling apart and who may have to start wearing diapers at any minute, or prop up some nonwhite, non-male, or non-hetero communist for whom only bearded, overweight podcasters and transgender Tinker Bells would vote.

Unless Trump stands in the middle of Fifth Avenue and shoots somebody, he has this one in the bag.