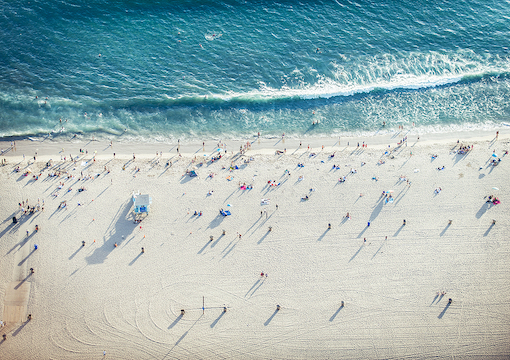 Thirty-five-year-old Nicole Mokeme was Portland, Maine’s BLM superstar. She founded “Rise and Shine,” a woodsy retreat where “BIPOCs” could gather and rant about whitey.

As Mokeme stated on her website, “as the awareness of white terrorism began to rise, black youth suggested the need for sacred Black space.” So she founded a black prideaway hideaway dedicated to “Black Liberation for Black people in Maine and beyond. A place where people of color explore the woods and not feel like we’re on white territory.”

Mokeme moved from Philly to Maine to get away from “white territory.” There’s “black genius” for ya.

“The very people who came here because L.A. was a city of houses not slums want to turn L.A. into a city of slums not houses on their way out.”

Mokeme was of course a huge “defund the police” advocate (George Soros is currently spending big to take over the Portland DA’s office).

Last month, as Mokeme was setting up a Juneteenth shindig at the “Black Excellence Retreat” in Acadia National Park, her boyfriend, 35-year-old Raymond Lester—an excellent black man—turned her into pothole filler in a rage-motivated hit-and-run. Lester, an inveterate criminal, had been a lifetime beneficiary of “progressive prosecution,” having evaded a 2008 domestic violence assault conviction ($300 fine), a 2010 domestic violence and theft conviction ($300 fine), an April 2011 arrest for violating a protective order (five days in jail), and a July 2011 felony domestic violence assault and criminal mischief conviction (six months).

In one domestic violence incident, Lester broke his then girlfriend’s jaw with a hammer and strangled her unconscious.

Between 2012 and 2021, Lester was arrested for drug possession, theft, stolen ID, disorderly conduct, resisting arrest, felony receiving stolen property, and forgery. In 2021, he was arrested for assault yet again, but even with all his priors, prosecutors offered a “deferred disposition,” in which Lester avoided prison by promising to “not engage in new criminal conduct.”

When I read that story, I have to admit that my first thought wasn’t “Oh, what a tragedy” but “At least they got one of their own.” That may not be the Sunday-school reaction, but it was sincere. “Finally, one of those ‘defund’ freaks paid the price instead of some innocent white girl or elderly Asian.”

I know, I know. “All mankind is of one author” yada-yada-yada yabba-dabba-doo. But Nicole Mokeme learned the hard way that the inevitable endgame of progressive prosecution is “black dude kills someone.”

Better her than you or me.

Indeed, the majority population of Maine got lucky. In cities like Portland (85% white), black criminals tend to choose white victims. This is increasingly becoming a problem here in L.A. As the black population wanes, as there are fewer black neighborhoods with black shopkeepers and homeowners, black criminals are increasingly poaching outside the hood.

I’m gonna pause for the sake of those who don’t live here. L.A. is a city and a county. We’re the most populous county in the U.S., but, more important yet rarely mentioned, we have the most “places.” Eighty-eight cities and more than 100 unincorporated areas. Here’s a county map. It’s only the broad strokes, but you can get a taste of the regional sprawl.

So, for example, in my area (the “Westside cities” gray zone), we have 3.3% blacks. Within that gray zone, Beverly Hills has 2.2%. But now go way up to the top of that map, to the area we call the “high desert.” Lancaster, see it? Seventy miles from the Westside, 21% black. Right next to Lancaster is Palmdale, 14% black, home to Section 8ers ejected from L.A. proper. That’s why any overall demographic figure for the county is pointless. Blacks may be 7.9% of the county, but based on the city you’re in, it can seem like 40% or 0%.

Due to demographic replacement from Mexicans on the South/Eastside and gentrification and high cost of living everywhere else, the blacks who don’t leave the state entirely are being pushed toward the outskirt areas like Lancaster. Those who remain in the parts of L.A. that are reasonably close to the Westside are, with unnerving frequency, victimizing the Westside. It’s ugly, but temporary (within ten years those blacks, too, will largely be gone, out of state or in the boonies).

But for the moment, it’s a concern.

I’ve written about Century City before, my little Westside oasis snuggled between Beverly Hills and Cheviot Hills (home of the famous dueling country club golf courses—one Jewish, one goy—staring each other down across Motor Avenue). In 2020 and ’21, super-upscale Century City managed to avoid the plague of black outdoor-dining robberies and smash-and-grabs, mainly because it’s somewhat hidden. It doesn’t have the name recognition of Beverly Hills, and its chicest stores and restaurants are in courtyards and malls elevated from street level, making drive-bys difficult.

But I was nervous. As our Soros DA Gascon ended prosecution of theft, I kept waiting for the other Nike to drop. As robberies increased in Beverly Hills, how long before Ja’Marcus noticed Century City?

That question was answered last year. As the lockdowns ended and restaurant traffic resumed as normal, a new eatery called Sugar Factory opened in Century City. A combination candy store/burger joint, with $21 burgers, $33 shakes, and $30 lollipops (I’m not making that up).

I never dined there because I’m not retarded.

For some reason it became the next Big Black Thing. Every night, night after night, packed with ghetto blacks. People who, according to AOC, can’t afford “bread for their families” were waiting two hours for a table to buy a $33 shake.

No black people live in Century City; they were driving long distances to get there. Check out the Yelp pics. You’d think from the clientele this was 1985 Compton.

I have no idea the “why” behind the phenomenon. The owners aren’t black. Were they paying a black “influencer” to promote the place? I sincerely have no answer. But what I knew was, this would be bad news. Sugar Factory was in a fancy, multitiered pedestrian mall, meaning that to get there every patron had to walk past rows of stores with enticing window displays behind easy-to-smash glass.

As if to boost my blood pressure even higher, several weeks ago talentless plagiarist Trevor Noah, a man who makes comedy lovers wish just one more South African black could’ve been beaten to death like Biko, chose Century City to host his “satirical” anti-GOP “art exhibit.”

So even more blacks descended upon my oasis.

And last week, it finally happened: Our first major smash-and-grab. A mob of fourteen young black men looted the Nordstrom, running through the mall with all they could carry, a motorcade of getaway cars awaiting them at the exit.

In an irony no one caught, the thugs ran right past where Trevor Noah’s exhibit had been placed just weeks earlier. Noah’s “art” calling Republicans racist, side by side with a mob of blacks demonstrating why it ain’t necessarily racism that fuels certain demographic “preferences.”

Also last week, Sugar Factory went out of business. Turns out it was months behind on rent, and the mall booted its ass. Though packed solid every night with customers, there were, according to a person connected to the mall who spoke to me on condition of anonymity, too many dine-and-dashes for the restaurant to turn a profit.

So let’s tie all of this together.

We’re witnessing a failed demographic with only one role left to play—spoiler. L.A. should’ve been paradise for blacks. Freed from the baggage of the old South, by 1910, L.A. black homeownership had reached 36%, the highest such rate in the nation. By the 1940s, L.A. was “an African-American, middle-class dream where blue-collar laborers could enjoy suburbia away from the slums.”

But blacks (aided by white and Jewish leftists) blew it, trading paradise for crime, welfare, anger, and entitlement, and now paradise has rejected them, black neighborhoods either being swarmed by the younger, healthier Mexican demographic or gentrified by whites, Asians, Indians, Arabs, and Persians.

Banished to the high desert, blacks give their unquestioning support to the Democrats who are ending single-family residence zoning in California. The very people who came here because L.A. was a city of houses not slums want to turn L.A. into a city of slums not houses on their way out.

That’s some good spoilin’ there, Ja’Marcus.

Sugar Factory tried mattering black lives by inviting them to dine. The result? Bankruptcy. Century City tried doing the same by hosting the Trevor Noah exhibit. The result? The beginning of what I fear will be a summer of smash-and-grabs.

And lest you think I’m being too fancy-pantsed with my spoiler analogy, black leaders are damn near copping to it. In a recent L.A. Times piece about how recalling L.A. DA Gascon will be more difficult than recalling San Francisco DA Boudin, the Times made the point that in S.F., if you’re priced out of the city, you’re priced out of the county. Meaning that the blacks who’ve left San Fran are politically irrelevant.

But in L.A., blacks priced out of L.A. proper flee to the outskirts, the “cheaper high-desert locales,” where they’re still technically in the county, and where their votes will count in the DA recall.

L.A.’s BLM grotesquerie Melina Abdullah told the Times that this gives L.A.’s blacks one more opportunity to influence county politics before they get the final heave-ho.

One final blow against the city by making sure the murderous DA isn’t recalled.

“There is time for those who want a progressive agenda to make sure that we don’t go the way of San Francisco,” she said.

“There is time.” That’s the key phrase. Abdullah knows that black L.A.’s clock is ticking, but there’s still time to inflict a few more bitter wounds before the countdown ends.

And as L.A.’s blacks spoil on the way out, blacks like Nicole Mokeme spoil on the way in, moving to white areas and bringing with them a fanaticism for defunding and decarceration and antiwhiteness to rain down upon a population that’s done them no wrong.

Spoiling is all American blacks have left. As someone who had a fine youth in “black L.A.” (every time I write about my majority-black school years, I hear from some of you accusing me of being “soft,” as if I should invent horror stories just to please you), reporting on the ugly exit of the community brings me no joy.

Neither does thinking about what many unsuspecting communities outside California have to look forward to once our blacks get pushed from the outskirts.

In a perfect world, introspective blacks would look at the tragic end of black L.A., and the tragic end of Nicole Mokeme, who died at the hands of the criminal justice policies she so loved, as cautionary tales.

But introspection isn’t big among blacks these days. It ain’t like a delicious $33 shake to gulp down and dash. This one’s an unappetizing shake, bitter to the taste.

But it’s free, and conducive to good health.

I really wish blacks were lining up to give it a try.