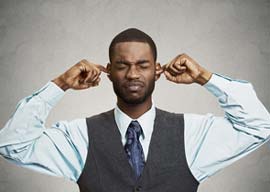 If a person of color feels offended by something a well-meaning white person said and no one knows they’re offended, is it still a hate crime?

This is the implicit question posed by the very idea of “racial microaggressions.” The concept seems to have been formulated by the racial-grievance industry to fill the savage dearth of truly aggressive acts committed by whites toward nonwhites over the past few generations.

In other words, if what used to be known as “racism” no longer exists, you have to greatly expand the term’s breadth so that it includes words, thoughts, and acts that have zero conscious hostility behind them. You have to make everything racist just to stay in business.

The term “microaggression” was allegedly coined by Harvard professor Chester M. Pierce in 1970 to describe rude or dismissive behavior he claims to have seen evil whites routinely inflicting on innocent blacks. In 1973 a female economist at MIT named Mary Row hijacked Pierce’s neologism and expanded it to include the endless perceived slights, insults, and random cruelties that so many women claim to experience whether others realize it or not.

But it was Columbia psychology professor Derald Wing Sue”an Asian male in case such things are important to you”who really took the concept of “microaggressions” to the hoop in 2007 when he broke it down further into four micro-categories. This boy named Sue distinguished between “microassaults,” “microinsults,” “microinvalidations,” and, most amusingly, “microrape.”

According to Wikipedia, microrape is “Characterized by predatory non-physical prurient communications with the intent to penetrate the victim’s emotional security on the basis of heteronormative impositions.”

“If a person of color feels offended by something a well-meaning white person said and no one knows they’re offended, is it still a hate crime?”

This handy table from the University of Wisconsin outlines several prominent forms of racial microaggressions. These include asking a person where they were born, assuming an Asian person is adept at math, and making seemingly benign (if undeniably sappy) comments such as “There is only one race, the human race.” The table also insists that if you say the best-qualified person should get the job, your soul bears the ineffable stain of having committed a racial microaggression.

Even if you have no hatred in your heart for a person of color and even if you make the most obsequious gestures of appeasement toward them, you are still hurting them and acting racist toward them because, well, you’re white, and that’s what you people do.

That’s what’s ultimately dangerous about this concept of “microaggresions””even the demented fanatics who insist that such things actually exist will concede that the perpetrator may not harbor or exhibit any malice whatsoever. They may not even be the least bit conscious that they are being horrid bigots. Under this framework, bigotry is solely in the eyes of the accuser. No matter how pleasant your demeanor or how generously you act, you can still be bludgeoned over the head with baseless accusations of unconscious racism, and your accuser will feel like a good person for doing it.

In fact, a recently released study about racial microaggressions seems to blame these invisible, unintentional acts of racism for the relatively high dropout rates and low academic performance among a certain racial group who shall not be named but you can probably guess anyway which is why I don’t feel the need to name them, which I suspect may be my unconscious way of racially microaggressing upon them, which is kinda interesting if you’re able to stop and think about it all without your head exploding.

The study bears the catchy title of Racial microaggressions at the University of Illinois at Urbana-Champaign: Voices of students of color in the classroom. I highly recommend it as the finest comedic document I’ve seen so far this year.

For example, a robust two-fifths of the online study’s respondents claimed they “felt uncomfortable on campus because of their race.” All I can do is shake my head and softly mutter, “Must suck to be them.”