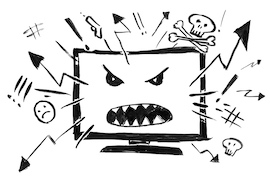 I don’t like being wrong. But every now and then, I find myself ashamed to be right.

Last month I made a prediction. There was a movie being distributed by Universal called The Hunt, and right-wingers were up in arms because they thought the movie “glorified” the murder of rightists. Such a movie is dangerous! It could inspire real-life violence, they wailed as they hiked their skirts and jumped on chairs like women in an Edison Kinetoscope.

The screaming meemies were, of course, wrong. The film was actually a pro-“deplorables” actioner featuring cartoonishly villainous leftists. But Universal bowed to the right-wing mob and pulled the film, and the red-state retards rejoiced in having killed one of the few movies in recent history with a plotline that actually favored them.

Which brings us to my prognostication. I looked ahead to Sept. 20 and the release of the new Rambo film with its all-Latino cast of villains, and I predicted that not only would leftists slam the film for being “racist,” but the same rightist anencephalics who cheered the canceling of The Hunt because it had a “dangerous message” would mock leftists for claiming the new Rambo film has a “dangerous message.”

Does Ben Shapiro shit in a potty chair?

RedState.com had decried The Hunt as a “blatant provocation,” a “pathetic” film that should be “scraped” (I think RedState’s Elizabeth Vaughn meant “scrapped,” but hey—I don’t speak tard). But when leftists attacked Rambo: Last Blood for being a “blatant provocation,” RedState spun a 180 and painted the film’s critics as insecure snowflakes. Western Journal declared that The Hunt should be “pulled” in light of the “growing discussions of whether ‘dangerous’ rhetoric and imaging have the potential to inspire violence.” But when leftists attacked Rambo for similar reasons, the Journal ridiculed the critics for being oversensitive.

American Thinker ran two pieces condemning The Hunt. One claimed that the “dangerous” film “promotes violence against conservatives.” The other straight-out called for the film to be suppressed, because “cinemization” of violence leads to real-world violence. But when leftists called the new Rambo movie “dangerous” because it “promotes violence against Mexicans,” Patricia McCarthy, the same dingbat who’d slammed The Hunt as “dangerous,” rushed to the Stallone film’s defense, attacking the critics for being “politically correct” while praising the Rambo series in general as “welcome revenge porn” and the new installment as “educational” and a “vicious, brutal, grim story” that “all Americans should see.”

“If TV can’t hypnotize people into buying a toaster, how the hell can it mesmerize them into committing mass murder?”

“Conservative comedian” and FoxNews.com bobblehead Tim Young is the embodiment of the stammering young cadet in The Untouchables, a cretin incapable of original thought whose mindless recitation of textbook answers guarantees (as Connery’s character observed in the film) upward mobility. Young helped lead the charge against The Hunt last month, because, he alleged, the film’s celluloid violence “normalizes” real-life violence. But this month, Young lambasted Saturday Night Live for cutting newly hired cast member Shane Gillis because of “offensive” podcast jokes about Asians.

We can’t allow “the mob” to “kill” speech, Young lectured while wearing his “defend free speech” hat (as his “kill speech I find offensive” hat sat idly on the chair). We must end “cancel culture,” he triumphantly bellowed.

So I called him out on Twitter: “Tim, didn’t you actively participate in the ‘canceling’ of the film The Hunt just a month ago?”

His reply: “I absolutely did. It was glorifying violence based on current politics.”

I’m not going to congratulate him on his honesty; I just think he’s too stupid to grasp the hypocrisy.

“Everyone who participates in ‘cancel culture’ has a ‘reason,’ Tim,” I responded. “Why are your reasons (‘it’s a hateful violent film’) more valid than the reasons of, say, an Asian person who went after Shane Gillis for his ‘hateful racist comedy’? An Asian person might say that the ‘harm’ that comes from a ‘racist’ joke is just as damaging as the harm you imagine comes from a violent action/satire film. Why can’t you see this simple point? Everyone who does the ‘cancel culture’ thing thinks THEIR beef is the most legit.”

“Cretinous Untouchables cadet” grew frustrated that I wasn’t seeing the simple truth that when he cancels content, it’s to protect society, but when someone else cancels content, they’re attacking free speech: “Making tasteless/awful jokes in the comedy profession is worlds apart from a film that promotes/glorifies violence based on our country’s current political divide.”

Which is exactly the problem leftists have with Rambo: Last Blood: It “promotes/glorifies violence.”

I can hear my faithful readers now: “Wow, Dave, you’ve proven that hyperpartisan ideologues can be hypocrites. Thanks for the scoop, brainiac.”

Hey, don’t be a dick, imaginary heckling readers. I have a larger point to make, and it has to do with why conservatives (bless their hearts) have failed to effectively counter the left’s relentless “cancel” crusade.

The right fears words just as the left does, though not necessarily to the same degree. Fearing words is to leftists what spraying stank is to skunks; it’s what defines them. But on the right, there are just enough stank-sprayers (like Tim Young and everyone else who helped sink The Hunt) to hobble the efforts of those who want to put an end to cancel culture. Indeed, rightists are every bit as vulnerable as leftists to that defining rationale of the word policeman: “Bad speech ‘makes’ people do bad things.” So let’s put that claim under a microscope. Can a brush with speech “influence” a person to do bad things? Is “bad speech” like a cold virus, something requiring only the briefest of contact to cause infection? Can a simple viewing of a film, or reading of a tweet, or hearing of a joke—absent any physical force or other type of coercion—“make” a person do bad things?

That’s why all those rightists went after The Hunt—the fear that people would be influenced by the film, and real-world violence would ensue. Much like how Catcher in the Rye “forced” Mark David Chapman to murder John Lennon. Blame books and movies, not the perpetrator; that’s a great position for “law and order” conservatives to take.

Danny Lee Young, the black gentleman who mowed down 48 pedestrians with his car on an L.A. sidewalk during the 1984 Olympics, blamed Stevie Wonder’s music for the crime. Hmph…if Ronald Reagan was such a great “conservative,” why didn’t he hold Wonder responsible? Wotta fraud!

To claim that a movie like The Hunt has the power to turn people violent is to accept the theory that criminals are not wholly responsible for their actions. That’s literally the most un-conservative position imaginable. And if “blame the entertainment biz for violence” is un-conservative, it’s to an even greater extent unscientific. Most of the studies “proving” that exposure to violent content can turn people violent in real life fall apart upon cursory examination. In 1992, “psychologist in need of a psychiatrist” Leonard Eron published a study claiming that little girls who watched The Bionic Woman, which he labeled a “violent and aggressive” TV show, grew up to be violent and aggressive adults. I called Eron, with whom I’d had a longstanding correspondence, and I asked him if he knew that Lindsay Wagner, a hippie vegan peacenik, had forced ABC to ensure that her character would never engage in violence. The Bionic Woman never punched anyone, never killed anyone. Eron sheepishly admitted that he’d never actually seen the show; he’d just “assumed” it was violent. I told him that Wagner’s character only used her bionics to do good, from cleaning the floor of a nunnery to making sandwiches for Boy Scouts. So if young girls who were regular viewers grew up to be violent and antisocial, that actually disproves the theory that TV shows influence behavior.

I’ll never forget the old fart’s sigh of resignation and defeat as we ended the call.

A common refrain among believers in the media’s ability to spur real-world violence is, “If the media doesn’t have the power to influence us, why do companies spend so much on advertising?” In fact, as my Taki’s colleague Steve Sailer recently pointed out, the “power” of advertising, especially TV advertising, is highly overrated, if not a complete myth (there’s even less evidence that online advertising has any measurable effect).

If TV can’t hypnotize people into buying a toaster, how the hell can it mesmerize them into committing mass murder? That’s a point made by Wilson Key in his seminal 1973 book Subliminal Seduction. The goal of, say, fast-food advertising isn’t to make you hungry. Advertising can’t “make” you get hungry; it can’t alter who or what you are. The point of advertising is that when you get hungry, on your own, you’ll hopefully think of an ad you saw and choose McDonald’s over Wendy’s.

The paranoia on the right that fueled the crusade against The Hunt is emblematic of our own form of Trump Derangement Syndrome. Many of us have been driven so insane by our hatred of the media, we’ve started to wildly overestimate its influence. As a veteran of Friends of Abe, I’ve seen this pathology present itself in hundreds of still-vocal members of the now-defunct org. Since 2016, there’s been a massive rise in posts from members claiming that Hollywood isn’t just leftist and hateful (which it is), but also a deep-state CIA MK-Ultra mind-control factory.

The 1999 book The Cultural Cold War: The CIA and the World of Arts and Letters is a kind of bible for the “Hollywood is CIA MK-Ultra” crowd. It details the CIA’s attempts in the 1950s and ’60s to influence public opinion via hidden messages in Hollywood films. But here’s the funny part: In the book, the spooks behind the scheme admit it didn’t work! “It didn’t change anyone’s course of action or thought,” historian, political insider, and former OSS operative Arthur M. Schlesinger Jr. cedes. And that was back when the media was more centralized, and the average media consumer more naive and gullible.

As I write this column, an anxious nation is bracing for all the violence the new Joker film is supposedly going to cause. The FBI and the U.S. Army have even gone so far as to issue official warnings about the movie’s likelihood to engender real-life violence. That’s the pervasiveness of the “bad speech makes people do bad things” pseudoscience; it’s literally government canon now. And why not? It’s a bullshit notion embraced by left and right, yet another example of the principle that, in politics, the things that “everyone agrees on” are often the worst things of all.