Lining Up to Get Berned 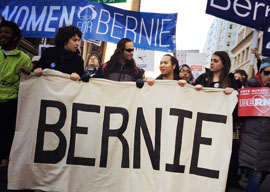 I went to a Bernie Sanders rally dressed as a liberal douche and it went exactly as expected. It was in Washington Square Park next to NYU and there were about 27,000 students, hipsters, and Ben & Jerry’s boomers there with pamphlets and buttons and kooky sunglasses. As with the Trump rallies, the audience skewed male, but unlike the Trump rallies, there did not appear to be one person there who was not retarded. “Fuck Hillary,” a towering hipster told me. “She started Bengali.”

It was Bernie’s second talk of the day. Earlier he did a speech backing the Verizon strike. Their workers are mad about the terrible pay they get from a corporation that makes $1.5B a month in profits. I talked to some of the striking workers and asked them if it’s true they make a reported $140K a year. “That’s a lie Verizon is spreading” one man told me. “It’s only that if you add up all our benefits and health care. The actual money we take home is only half that.” Striking when you make $20K a year more than the average American and get another $70K in benefits. These unions aren”t protecting their workers. They”re pricing them out of the market.

“You can hate big business all you want, but at least concede it’s the lesser of two evils.”

The line to get into the park filled every block around it shoulder to shoulder and the police created a snaking line that went away from the park before turning around and heading back to it. We couldn”t move for at least an hour, but nobody seemed to mind. Bernie’s people don”t mind lining up. “That’s a good thing,” Bernie told reporters in 1985 while defending the bread lines in socialist countries. “In other countries people don”t line up for food. The rich get the food and the poor starve to death.” Was he talking about Venezuela? The poor have both lines and starvation there. They also have a minimum wage. It’s $20 a month. Caracas is the most dangerous city on earth and Chavez’s daughter is worth $4B. We don”t need their socialism to prevent our citizens from starving to death. In fact, one of our biggest problems is that our poor eat too much.

I spoke to about a dozen people and the patterns were easy to discern. Every college student I spoke to cited Bernie’s promise to abolish their student debt as the main thing they like about him. Only he never said that. He wants to make public college free, not private colleges such as NYU. It presently costs about $3K a year to go to city college and it is really easy to get a scholarship. My buddy Arvind got the state to pay him $4K a year and all he did in high school to earn it was maintain a C+ average. Today’s private-college students easily wander into a quarter million of debt. The irony is, they”re all about “resisting capitalism” but it’s the free market that got them into this mess. They insisted on Mickey Mouse classes like How to be Gay and the supply met the demand. Now they want communism to step in and pay their bills? Not even Bernie is that stupid.

Another program they seemed excited about was people making over $10M paying 52% tax (he has since shied away from a 90% tax rate, though ThinkProgress suggests we go closer to 95%). When I asked them what they were going to do if they started making a lot of money, they said it was never going to happen. This economic misanthropy is what drives Bernie’s popularity and it’s based on envy. They don”t want everyone to be equal. They want the rich to have less. The kids I spoke to said you should never have more money than $100,000. Bernie’s tax plan hits hard after $400,000. I asked what happens if you cure cancer or create a company that employs thousands and they insisted this person give away everything after the $100″400K mark. If he created those things for the profit, he’s “evil.” We”re at a point where the left isn”t even sure if “the good rich“ is possible.