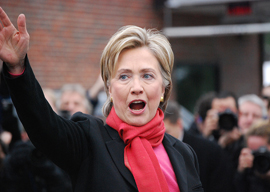 Pantsuit-wearing suspected oyster-gobbler Hillary Clinton likely sealed the Democratic presidential nomination last Saturday by whipping Bernie Sanders like a slave in South Carolina. Hoisted aloft by a black electorate that gave her 86% of their votes, Clinton smothered Sanders, despite his awkward attempts to reach out and touch black people in real life by persuading them that although he’s a Jewish guy who represents a state that’s only 1% black, he understands their struggle better than the former Madame Secretary does.

Last Wednesday, Clinton awkwardly dodged a big fat black bullet in the form of one Ashley Williams, a “youth activist” for Black Lives Matter who had the moxie to attend a private Clinton fundraiser at a swank Charleston home and confront her about comments she’d made in 1996. While Clinton”apparently clad in green curtain drapes”yabbered on about the Charleston massacre and her record on “racial justice,” the nappy-headed Williams pushed herself in front of the herd and unfurled a banner stating “WE HAVE TO BRING THEM TO HEEL,” which is a direct quote from Clinton regarding what she had described as criminal “super-predators.”

I’m not a super-predator, Hillary Clinton. Will you apologize to black people for mass incarceration?…You called black people predators.

Clinton said she’d be glad to answer that question, but after a Secret Service agent gingerly escorted Williams out the door, Clinton completely ignored the question and, in her words, went “back to the issues.” The entire hilarious encounter, which lasted less than two minutes, can be viewed here.

“Even though Hillary Clinton never mentioned blacks by name, the stats clearly illustrate that when it comes to predatory criminal behavior, they truly are ‘super’ at it.”

Williams had issued this statement prior to the event:

She called our boys “super-predators” in “96, then she race-baited when running against Obama in “08, now she’s a lifelong civil rights activist. I just want to know which Hillary is running for President, the one from “96, “08, or the new Hillary?

Never one to miss a chance to make a huge mistake in public, Shaun King of the New York Daily News“truly the nation’s finest living comedian and a white-skinned male whose owners wisely have shut down all comments on his articles”claimed that Clinton “called young black kids ‘superpredators’” and wondered aloud why she hadn’t openly apologized for making such an unforgivably racist and obviously untrue statement.

A lifetime of having my own statements woefully misquoted and egregiously misrepresented has taught me that whenever someone is accused of making an outrageous statement, it’s usually wise to examine what they actually said. Here are Clinton’s 1996 comments, transcribed word-for-word by Yours Truly based on the video shown here:

Notice something missing there? Specifically, the word “black”? If one were so inclined, one might be able to more reasonably infer an anti-Italian sentiment (“the Mob”) or even an anti-Mexican animus (“big drug cartels”), but even then one is presuming Clinton was using “dog whistles” and “coded speech,” two weasel phrases used by people who insist that even if there’s no racial content in your comment whatsoever, it is loaded with whatever incorrigible racial subtext they want and need there to be in order to smear you as a “racist.”

If mentally inert “activists” such as Shaun King and Ashley Williams misconstrue a race-neutral comment that is purely about gang criminality as a racial smear against black America, methinks they doth protest too much.

So what do the stats say about American gang membership?

All righty, then, what do the statistics show about the intersection of race and violent crime? Department of Justice stats from 1980 to 2008 show that blacks”13% of the population”committed 52% of all homicides in the USA. FBI stats from 2013 show blacks lagging a bit in the murder department”they “only” committed 38% of that year’s murders but still killed more people than whites did, despite the fact that whites outnumber them by a factor of about five to one. Blacks were severely overrepresented in all areas of crime, but when one looks at the sorts of offenses that may be labeled “predatory””murder, rape, robbery, and aggravated assault”blacks are typically overrepresented by around 300% or more. No other group comes close to such lopsided overrepresentation.