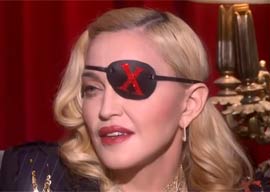 Last Wednesday, The New York Times published a long feature article called “Madonna at Sixty,” which, if the title didn’t telegraph its theme clearly enough for you, focused on the sexagenarian superstar’s efforts to remain relevant and sexy in a music industry dominated by teens and young saplings in their twenties. Penned by 45-year-old Vanessa Grigoriadis, it is a mostly glowing hagiography that touches upon the author’s own struggles with aging, which Madonna curtly shuts down by telling her that she worries too much about growing old.

Regarding how Madonna felt when songs from her 2015 album Rebel Heart were leaked online prior to the record’s release, well, duh, she felt raped:

There are no words to describe how devastated I was. It took me a while to recover, and put such a bad taste in my mouth I wasn’t really interested in making music. I felt raped.

The day after the article appeared, Madonna took to Instagram to claim that the article made her feel raped as well:

To say that I was disappointed in the article would be an understatement- It seems. You cant [sic] fix society And its endless need to diminish, Disparage or degrade that which they know is good. Especially strong independent women. Im [sic] sorry i [sic] spent 5 minutes with her. It makes me feel raped. And yes I’m allowed to use that analogy having been raped at the age of 19. Further proof that the venerable N.Y.T. Is one of the founding fathers of the Patriarchy. And I say—-DEATH TO THE PATRIARCHY woven deep into the fabric of Society. I will never stop fighting to eradicate it.

Yes, our suffocating, lady-crushing patriarchy is so averse to “strong, independent women” that it allowed this attention-crazed skank to become the biggest-selling female recording artist in history with an estimated net worth of $590 million. I simply can’t imagine that level of oppression.

In 2013, 34 years after the traumatic event allegedly occurred, the slag born Madonna Louise Ciccone suddenly felt the compulsion to describe being raped shortly after moving to NYC from Michigan:

New York wasn’t everything I thought it would be. It did not welcome me with open arms. The first year, I was held up at gunpoint. Raped on the roof of a building I was dragged up to with a knife in my back, and had my apartment broken into three times.

Considering Madonna’s tendency to shit upon everything white and male, combined with her affinity of wantonly adopting half of Africa and screwing half of the NBA, compounded by my awareness of the intersection of modern rape statistics and race, I’m going to go out on a limb here and suggest she purposely concealed her assailant’s ethnicity.

Because she claims to have been raped—I’m not saying she wasn’t, but you can look at false rape accusations from a number of different angles, and if you want to say it’s false unless there’s a criminal conviction, something like 99% of them would be false—she claims the exclusive right to compare leaked songs and a newspaper article to being raped at knifepoint on a rooftop.

In an era of estrogenic #MeToo hysteria, doesn’t she see how dangerous this is? When everything becomes “rape,” everything becomes risky for innocent men. If you’ve actually been brutally raped, one would think you’d be able to tell the difference between real rape and the minor misfortunes of the brutally rich.

Obviously, people claiming they “felt” raped when they weren’t is nothing new. Actress Maria Schneider, who garnered the only fame she would ever achieve after starring nude with Marlon Brando in 1972’s Last Tango in Paris, waited 35 years to tell the world that she felt raped while filming a scene where Brando smears butter on her nether regions before orally pleasuring her:

I felt humiliated and to be honest, I felt a little raped, both by Marlon and by Bertolucci. After the scene, Marlon didn’t console me or apologise. Thankfully, there was just one take.

And it’s not only women. Bollywood star Salman Khan complained that having to film wrestling scenes made #HimToo feel like being raped:

When I used to walk out of the ring, after the shoot, I used to feel like a raped woman. I couldn’t walk straight.

Sometimes women say they feel raped just by hearing that another woman was raped:

Being a woman, I felt raped.
Only that I wasn’t.
She was.

Some girls even say they feel raped by innocent expressions of affection:

Someone kisses me, I feel raped. Someone gives me flowers, I feel manipulated and controlled.

Hell, online movie reviewers say they feel raped by movies that have nothing to do with sexual assault. Here’s one example:

This “film” is simply dreadful. I won’t drag this out. Terrible writing, directing, acting. Terrible scenes, production, makeup. They probably had terrible food on set too. There is not one single thing to like in this “film”. I felt raped.

A boring movie that is slow and far to [sic] obvious concerning its true intent, and agenda. I felt raped by this crap.

Some disgruntled tourists aren’t above comparing a disappointing hotel experience with being sexually assaulted:

After paying the Agoda rate (a little less than the hotel’s asking price of 5000 pesos/night) for a villa and getting checked in I felt raped. I felt deceived, taken advantage of, and used.

Actor Johnny Depp, who has been quite insane for a long time, likened posing for a simple photo shoot to being raped:

You just feel like you’re being raped somehow. Raped….It feels like a kind of weird…just weird, man.

I feel raped, that’s how I feel. Raped, frightened and sad.

Yes, I understand the literary usefulness of hyperbole, but the problem is that many modern women and the men who believe everything they say often can’t tell the difference between reality and feelings.

Last week my new physician gave me a prostate exam.

After careful deliberation, I’ve decided to call the police.