Midterm for the Worse, Part III: Disjoin or Die 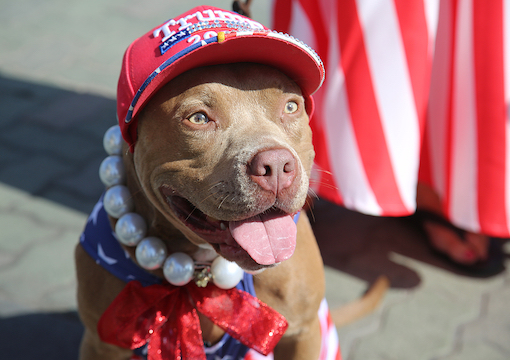 Last week I was watching Tammy Bruce on Fox, and…hey, is she still a lesbian? That used to be her thing, right? Whatever happened with that? Tammy Bruce’s lesbianism was like Bobcat Goldthwait’s screaming: It was never interesting, but it was at least distinguishing.

So there’s Bruce, the day after Trump’s presidential announcement, and she’s explaining why, even if you don’t care for Trump, he’s still badly needed in the 2024 primaries.

Of the GOP and Trump’s potential challengers, Bruce declared, “If you can’t handle Donald Trump, how can you handle the world?”

“Unrestrained, crazies will always drown out everything else.”

Her point was, Trump is like a drill sergeant abusing Marines to make ’em hard for battle, or an abusive father who only beats you because he’s prepping you to handle the harsh realities of life. So even if you support DeSantis, let Trump have at him! Let’s see if he can take it!

With such brilliance, I wonder why Bruce ever felt the need to resort to sexual gimmickry.

She completely glosses over the harm a bruising primary can cause, the damage it can do to a party and a candidate. Carter/Kennedy 1980, Bush/Buchanan 1992, Clinton/Sanders 2016. Bruising primaries only create bitterness and deflated enthusiasm among the people who supported the failed challenger.

But more to the point, Democrats don’t attack like Trump. “Surviving” Trump doesn’t prep you for jack shit. Trump attacks like a child; it’s actually quite easy to “handle” him. Nobody is scared of Trump. What they’re scared of, and here’s something everyone on the right sorta knows but few will admit, is his followers. Trump’s hardcore loyalists are a special kind of scary; reality-detached kamikazes who’d rather lose a hundred elections than support someone their leader condemns.

I know a lot of people, too many probably, who are deep into the Trump-worship cult. They range from very decent older folks—good people, but also people who’d give their Mastercard number to a Punjabi cold-caller claiming to be from Windows security—to unmoored ideological fantasists who speak of “national divorce,” “secession,” and “accelerationism,” and who see in Trump a guy who’ll “burn it all down” even though he didn’t even remotely do anything like that the first time around (“He wasn’t angry then; he is now!” is the response you’ll get if you bring that up).

A core belief of these cultists is that MAGAs alone can elect anyone anywhere. They don’t just dismiss independents; they’re outright hostile to them. “To hell with anyone who’s not ‘one of us.’ We can do this ourselves!”

Even though, of course, they can’t. It’s a complete fiction that MAGAs alone can elect as much as a dogcatcher. But you’ll never convince them of that. They refuse to understand that Trump barely won in 2016 (a handful of votes in a few swing states), and of course they can’t accept that he lost in 2020. Not with MAGAs behind him! If you’re MAGA and you lose, it has to be fraud!

Kari Lake telling McCain supporters—in McCain’s state—“to hell with you; beat it, we don’t need ya” had nothing to do with her loss. She had MAGAs, and that’s all you need! So she must’ve won!

After the midterms, Styxhexenhammer666, that dude who vlogs in a leather jacket and no shirt, tweeted that all of the supposed “news” about Trump-endorsed candidates losing was nothing more than “carefully crafted astroturf meant to stop Trump, because he terrifies them.”

I put a simple question to Styx: “How do you explain Dems elevating MAGA candidates in the primaries under the assumption that they’d be easier to beat in the general? How do you reconcile that with the claim that Trump terrifies leftist operatives?”

His response: “They may be terrified of Trump—that does not mean they fear all of his picks. Like anyone, Trump is fallible and sometimes chooses the likely loser (see: Mastriano).”

My follow-up: “What I’m having difficulty understanding is, in what way are ‘they’ terrified of him? The Dem scheme to elevate MAGA candidates in place of GOPs who didn’t have Trump’s blessing was a calculated bet that Trump-loyal MAGAs don’t exist in great enough numbers to bring a candidate across the finish line by themselves, and Trump’s endorsement is not enough to move independents and non-MAGA GOPs. I’m having difficulty reconciling the notion that people who would place that bet are also people who are terrified of Trump.”

I’m sure Styx wanted to reply, but he probably had to rush to the dry cleaners to get the armpit stank out of his Fonzie jacket. Because I never heard from the man again.

The fact that leftists despise Trump, and they do despise him, doesn’t mean they fear him. Think right now of someone in politics you hate. I mean, really hate. A politician, or a media figure. Got a name? Okay. Now, do you fear this person? Probably not. In fact, I bet you’d love to go head-to-head with the object of your scorn. You’d like to take them on, and you probably think you’d prevail.

Assuming that people who hate you are scared of you is the right’s version of AOC’s “everyone who criticizes me wants to date me.” It’s bullshit; don’t let your thinking get sloppy like that. Yes, Trump is hated by the left. No, that doesn’t mean he’s feared.

And the left certainly doesn’t fear Trump loyalists. Leftists are hoping these guys make a mess of the primaries. Trump won in 2016 on a single unifying issue (immigration). That’s what the left fears. The MAGA personality cultists who scream, “We don’t need a platform; Trump is our platform!” are the left’s best hope. Leftists want that mob to get loud enough to not only drown out the issue-oriented voices, but keep Trump lost in his illusion that the mob alone can elect him.

Check out Trump’s Truth Social page. All he does is “retruth” QAnon memes. That rally in September when Trump played the QAnon anthem and a sea of idiots did the “pointy finger” shtick? That wasn’t an anomaly; that’s the future. Even as Trump was boring the tar out of all of us with that leaden hour-long announcement speech that was so dull, attendees were hoping Madison Cawthorn would whip it out just to alleviate the tedium, Trump’s Truth feed was filled with retruthed memes about the coming “Q storm” and the battle against “satanists” who “feed children to Moloch.”

No mention of immigration; just cabals of blood drinkers.

In all political or ideological endeavors, there’s a balancing act that must be performed regarding the fringe dwellers. To illustrate that point, I’ll dip into my own past. Thirty-five years ago, there was a small group of intelligent guys who were interested in strengthening Holocaust history by challenging some of the factually unsupported aspects of the mainstream narrative. Right or wrong, it was a noble goal. And because the goal was intellectually defensible, our circle included great minds like Christopher Hitchens, John Sack, John Toland, and professors and authors from around the world.

But on the fringe you had the crazies—the people who weren’t smart enough to understand the subtleties of historical revisionism; the people who wanted to deny! Holohoax! Fight the Jews! Restore Hitler’s honor! Demolish the lies that created Israel!

The people in charge of running revisionist think-tanks and magazines had to do a balancing act; tolerate the crazies, accept their support, but never empower them. Cater to them just enough, but at the end of the day, give them no vote, no veto power.

We knew who the crazies were, and we did our best to keep them in their place. But over the years, the rational revisionists aged out or moved on, and as the gatekeepers left (and as the internet made gatekeeping more difficult), the crazies filled the void. And now there is no more Holocaust revisionism, only lunatic denial. The nuts took over. And once that takeover was complete, there was no trace left of the original mission. What started out as an academic exercise to separate fact from fiction has now become an exercise in denying fact and disseminating fiction, and if you confront any Holocaust denier about the falsehoods they spread, they’ll invariably say that for them it’s not about sifting fact from fiction anymore but weaponizing denial to fight the Jews (“They weaponized history against us, so now we’re doing it back to them! There’s no truth in war; only defeat or victory”).

The initial mission, to cleanse the historical record of war propaganda, mutated into the exact opposite, a bunch of people who think they’re in a war, which requires them to spread propaganda.

That’s what happens when you let the crazies take over. That’s why now, among the QAnon nuts, there’s no mention of immigration. The initial mission was of no interest to them (as Trumpist diehards like Darren Beattie freely admit). Yeah, it was of great interest to voters, but not the cultists. And since the cultists no longer believe they need the voters, the initial mission ain’t coming back.

Trump isn’t even trying to do a fringe balancing act; he’s 100 percent with the lunatics. He’s fully empowered them. He’ll bring them with him to the primary, and they’ll be like black girls in a crowded theater: the only voices you hear, and the more you tell them to be quiet, the louder they get, until their din fills the room at the expense of all other sound.

Unrestrained, crazies will always drown out everything else.

We’ve just had midterms that proved conclusively that swing voters exist and the GOP needs them, and we have Trump launching 2024 with an army of acolytes who’ll alienate those independents. And don’t be fooled by his “dry” announcement speech; he’ll always play to his cultists (“stolen election!” “Moloch!” “Q!”), more so as the primaries get underway.

There’s only one way to head this off: Rational rightists have to stop pandering to the cultists. Zero tolerance. No winking at their wacky theories, no playing to them just enough to get subs for your Substack or views for your videos. You have about a year before any of this matters; a year to isolate and demoralize the Moloch fingerpeople.

I often joke about Cerno and Poso being the same person, but I have to say, I was impressed to see Cernovich being brashly impolite to Trump cultists following the midterms. He responded to tweets about “rigged elections” and QAnon nonsense by essentially saying, “You’re crazy, go away.”

Do likewise. Shame them. Mock them. Thin that herd. “No, Moloch isn’t trying to drink your blood, you imbecile. Now smarten up or get out.”

Trump and his acolytes may have their hearts set on a disruptive primary, but you don’t have to make it easy for them. Turn Bruce’s “bruising primary” thing around on her.

Hey Trump, if you can’t handle an audience of non-cultists, how can you handle the world?