The Soft (Skulled) Underbelly of the Right 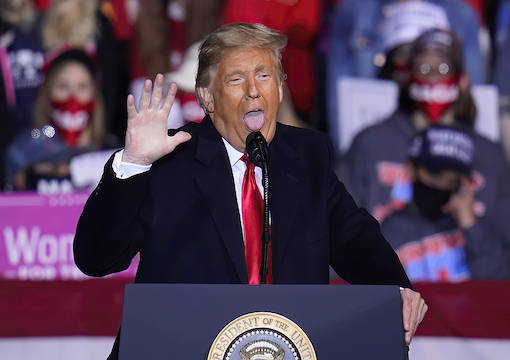 This is why I rarely do podcasts; I always disappoint in person. Hosts expect GG Allin, and they get Shlomo Mintz. I never live up to my billing as a monster.

And because I’ve been called every name in the book over the course of 33 years, insults don’t faze me. Nevertheless, the invective lobbed at me last week by former Trump speechwriter and policy aide Darren Beattie struck me as particularly puerile:

I know that Cole’s ideas are just very dumb. He’s just an ugly dumb guy and I think he has a problem with drinking but I can’t say that for a fact but, just a trash individual. A petty soul, who will never be…you know, it’s just a petty soul.

“There’s nothing more dangerous than when two people with soft brains and undeveloped ideas but tons of childlike energy and enthusiasm feed off of and empower each other.”

Beattie, one of Trump’s most fanatical acolytes, is clearly trying to imitate Trump’s insult style, which is creepy (any adult LARPing as their hero is pathetic). But understanding why Beattie set his sights on me is instructive.

On Aug. 2 I penned a column in which I addressed the claim that January 6th participant Ray Epps is a “fed” who was in cahoots with a leftist named John Sullivan. I pointed out that none of the promoters of this claim (like Beattie) were showing the “incriminating” footage of Epps in context; the conspiracy-mongers were showing the clip isolated from what occurred beforehand. Also, the Epps/Sullivan collusion claim was based solely on, in the words of Beattie’s Revolver News, the two men “sharing the same video frame” (i.e., one still frame from a video). I made the point that Sullivan livestreamed the entire evening, and from the full video, it’s clear that Sullivan didn’t know Epps.

The withholding of context—basing a theory on one video frame while not showing the actual video—is the work of someone not interested in truth, but manipulation.

The other point I made in that Aug. 2 column was that the 1/6 Committee is, even if inadvertently, functioning as a massive “troll” on the right because it’s keeping rightists distracted, redirecting their focus away from midterm-winning issues while empowering the Trump-obsessed arm of MAGA that’s abandoned fighting for issues in favor of fighting for Trump.

And indeed, to some in MAGA, the fight has shifted from “for America” to “for Trump,” which sets up a stark contrast between supporters of DeSantis, who tend to focus on issues (immigration, crime, trannyism and CRT in schools, Covid), and Trump loyalists, who fight for a man, not a cause (to them, the man is the cause).

I covered that in a June 28 column about dueling theories regarding swing voters: that they don’t exist (elections are decided by the enthusiasm of partisan activists—this is the “Bitecofer Theory,” named after the morbidly obese leftist pollster who codified it), and that they do (a handful of “convincible” voters can swing an election based on candidates promoting or ignoring issues of import).

Activists left and right favor the Bitecofer Theory because it favors them; if Bitecofer is correct, activists are all you need to win an election. This is why Trumpists have to believe in 2020 vote fraud. They might not know the name “Bitecofer Theory,” but they believe it with all their heart. The Bitecofer Theory dictates that Trump couldn’t have legitimately lost, because he had die-hard activists, and that guarantees victory. On the other hand, if Bitecofer’s wrong, and a small number of blue-collar white voters—say, 20,000 in a swing state—can influence an election because the guy they voted for four years earlier didn’t build the wall, installed an “immigration czar” who favors amnesty, reacted to BLM riots by ignoring white voters in favor of Platinum Plans and Soros/Kardashian decarceration, and responded to a nationwide crime wave by signing the pro-felon First Step Act, then Trump’s loss is perfectly explicable.

So here comes Beattie last week, doing an interview with some Italian nonentity, and he’s asked about that Aug. 2 column of mine. The Italian guy mangled the point of my piece—I don’t think English is his first language—but Beattie knew the column well. And he let loose with his pseudo-Trumpian insults.

Beattie condemned me for challenging his “feds did 1/6” claims (keep in mind, all I did was provide the context Beattie and Revolver didn’t), but mainly he was pissed at my take on Trump vs. DeSantis.

And here’s the funny part: In a way, regarding Trump and DeSantis, Beattie and I have no disagreement. To understand this, one needs to listen to the full audio of the interview, not the truncated transcript prepared by the Italian dude.

In an untranscribed section, Beattie states that it’s wrong to “prioritize policy” over “personality.” DeSantis is good at policy, but Trump has (in Beattie’s own words) a “cult of personality,” and Beattie feel that’s more significant. “The things that made Trump great or at least unique, it’s not the policy proposals,” but “personality.” Think about that a moment. Trump won on one of the most specific policy platforms of any candidate in my lifetime. Immigration, immigration, immigration. Beattie is saying that was irrelevant, that Trump didn’t win on policy proposals, but “feels.”

What we’re seeing here is the Bitecofer Theory in action. Whereas Trump’s 2016 immigration proposals appealed to blue-collar white swing-state voters (and still do, based on polls), Beattie dismisses the importance of that, then and now. This is exactly what I criticized several weeks ago when I recalled how, in 2016, my old comrades at Friends of Abe—Hollywood activists, not blue-collar voters—responded not to Trump’s platform, but his personality.

Beattie and I are in complete agreement that hardcore Trumpists don’t give a shit about policy. He’s quite explicit when he states (and you can see why this was left out of the transcript), “I would be willing to bet anything that if you get Trump supporters, you say, ‘Oh, Trump said this, Trump said this,’ within reasonable parameters, they would support it if Trump supported it. There’s not an ideological fixation, and Trump is a function of that.”

The dude who calls me a dumb ugly drunk actually agrees with me 100 percent! Trump’s personality cultists don’t care about issues. They aren’t fighting for issues. Trump switches from “deportations day one” to “Platinum Plan,” and they don’t care. They accepted Kushner as immigration czar, and they’d accept him again.

Where Beattie and I differ is that whereas I think this is bad, he thinks it’s good. We both agree completely on the facts. Yes, Trumpists don’t care about issues; yes, the Trumpist plan for victory is to run on Trump’s personality, not issues. And apparently I’m “dumb” for thinking that’s not a good idea.

Beattie has to cling to Bitecofer’s “activists matter, not swing voters” theory for sheer self-preservation. If Bitecofer’s wrong, if elections are decided by issues that draw voters, not personality cults that draw activists, Beattie becomes irrelevant. All the MAGA Trumpists become irrelevant. And DeSantis, who is literally Mr. “Issues Over Personality,” becomes the clear choice.

Beattie must support Bitecoferism, for self-interest.

The problem is, Beattie only discusses election-winning, not governing. And why bother to discuss governing when your be-all end-all is that your guy wins, issues be damned? Beattie never considers the downside of a president whose loyalists are uninterested in policy. Beattie only focuses on Trump’s personality, because to him that’s all that matters.

He claims Trump has a strong “constitution.” Really? The guy who let his daughter and son-in-law dismantle his 2016 immigration platform? The guy who let a TV host dictate his Covid policy? Yeah, Trump has a “strong constitution”…on the campaign trail. And if that’s all you ask of him, you’ll be satisfied. But in office? He has no “constitution” for policy. Couple that with a personality cult that doesn’t care about policy, and it’s a recipe for disaster.

One of the most well-established facts of child psychology is that minors who commit crimes typically do so in pairs. And the younger the children, the more that applies. That’s because there’s nothing more dangerous than when two people with soft brains and undeveloped ideas but tons of childlike energy and enthusiasm feed off of and empower each other.

What goes for individual children goes for groups of adults.

Still, I’m grateful to Beattie for spelling out the choice rightists have between now and 2024: Trump, whose strength is personality, whose “personality cultists” ask nothing more from him than that, and whose activists believe that a personality cult is all it takes to win elections, vs. DeSantis, whose strength (as Beattie admits) is policy, whose followers are interested in policy over personality, and whose activists believe that swing voters exist, and the only way to move the pendulum in swing states is to directly address the issues that are of immediate concern to blue-collar whites.

Beattie foresees the coming clash. He tips his hand in the interview regarding how Trumpists plan to attack DeSantis supporters; he accuses DeSantis backers of being “weak,” “soft” cowards who only back DeSantis because they don’t want to be “canceled” or “called a racist.”

I’ll end on that. This guy thinks the left goes easy on DeSantis and his supporters.

The same left that funds MAGA primary candidates because they see them as dead meat in the general.

This left “fears” Trump but goes easy on DeSantis.

And I’m the dumb guy?

That said, after dealing with this lunacy, I do need a drink.