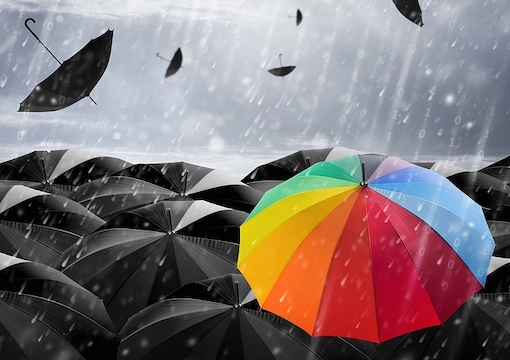 This is my third “apartheid” column in a row—consider it the close of a trilogy. Several readers have noted the depressing nature and resigned tone of the previous two pieces, to which the best reply I can muster is, at this point I genuinely believe that chronicling is all that’s left to do.

I can write a hundred outrage-filled columns about why the apartheid is bad (and I used to pen exactly those kinds of pieces), but your grandchildren aren’t going to be interested in such things. They’ll know the apartheid is bad because they’ll be living under it. Why would they need to read some pundit from 2022 wailing, “A system that disfavors its best and brightest based on skin color is unjust”?

What they’ll be asking is, “How did people let it happen?”

That’s what’ll interest them. So that’s what I chronicle.

And if I had to summarize the “why” of “Why did we let it happen?” I’d say that the political will wasn’t there to stop it.

Will and desire are two different things. Average blue-collar white voters certainly don’t want to become second-class, disfavored citizens. We know that from ground-level responses (polling and election results) to issues like CRT in schools, Third World immigration, and unchecked crime (which is 100 percent a racial apartheid issue, as Soros policies are specifically designed to shield blacks from the repercussions of criminal acts at the expense of whites).

But politically, for things to happen, the will must be there among those who are in some way, on some level, on the inside. The party establishment, the activist class, the donors. There’s just so much (there’s actually very little) Joe Pigfarmer can do other than vote; he has a family and a life. He’s not on Twitter 24/7, he doesn’t write a blog, he doesn’t run a PAC.

We all know the GOP establishment is absolutely fine with antiwhiteness; no need to even waste space discussing that. It’s the activist class that interests me. During my “David Stein the GOP operative” years, that’s where I spent my time, as an activist and organizer with Friends of Abe, the now-defunct “secret” organization of entertainment-industry GOPs.

I want to focus on that group to make a larger point: Five years with those guys, and I never heard one of them mention immigration. Not once. The org’s two largest cliques were neocons and pro-lifers. There was no “truce” because the cliques weren’t in opposition. With Roe still the law of the land, the pro-lifers’ “save the baby-wabies” blather was purely theoretical; the oygenflaygin Israel-firsters, who either didn’t care about the wabies or straight-up supported the right to vivisect them in the womb, could happily tolerate the pro-lifers, because what threat were they? Roe kept the matter rhetorical.

Why start a fight over a moot debate?

And the pro-lifers supported Israel, of course, because the Bible end-times Judeo-Christian something something something. And all of us, pro-choicer and pro-lifer alike, supported pointless foreign wars, whether to “stand with Israel” or “fight Islamic terror” or frankly just because we all felt really good about ourselves when Dick Cheney or Karl Rove would swing by with a badly maimed soldier so we could give him a standing ovation.

And that’s the point: The group’s focus, its (to quote The Untouchables) “entusiasms,” tended to mirror those of the people from the establishment who paid attention to us and fawned over us and made us feel important.

When we held a banquet for Liz Cheney in April 2010, we practically carried her aloft on our shoulders as she sang the praises of endless war.

Five years I spent with that group—a banquet a month and a beer social or bar night a week—and I never heard anyone bring up immigration. Indeed, when it came to anything that even broached the topic of race, we were big-tent clowns. It’s at FOA where Andrew Breitbart first announced his desire for the GOP to run an all-black ticket (president and VP) to prove how not-racist we are (because that’s way more important than policy). We routinely hosted then RNC chairman (now MSNBC rainman) Michael Steele, rewarding him with countless standing ovations for his retarded rants about blacks and Mexicans being “natural Republicans.”

“If I had to summarize the ‘why’ of ‘Why did we let it happen?’ I’d say that the political will wasn’t there to stop it.”

We all bleed red! Party of Lincoln! Look, there’s Joe Phillips from The Cosby Show!

But Mexican migrants being “rapists”? If anyone had said that, they’d have been out on their ear.

But then in June 2015, Trump said it. And by pure chance his first big shindig following the “not sending their best” presser was a Friends of Abe banquet (which had been scheduled months in advance). And the die-hard Abes who braved a sea of protesters on Sunset Boulevard and a total hotel lockdown due to security threats came away fully, completely, 100 percent on the Trump train.

And that’s when FOA fractured and broke. The neocons wanted nothing of the Trumpers, and in early 2016 the org shuttered.

But the damnedest thing was, all those pro-Trump Abes who were now screaming for walls and deportations…these were people who’d never expressed one iota of interest in immigration prior to Trump. Were they responding to the issue, or the man?

Well, in fact, many of those Abe activists were the same ones who, in 2011, rabidly supported Trump’s anti-Obama “birther” crusade (I did a column about that back in September 2016, in which I rather presciently predicted that Trump would lose interest in immigration just as he’d lost interest in birtherism, and that his followers wouldn’t care).

The Abes who went gaga for Trump in 2011 over birtherism and in 2015 over immigration weren’t per se interested in either birtherism or immigration; they were, after four years of Obama (in 2012) and then eight years (in 2016), interested in finally winning again, and Trump’s Poochie the Dog in-your-face attitude (a totally outrageous paradigm!) won them over to the man and his chances of winning. The cause wasn’t as important as the entusiasm.

The key difference between 2011 and 2016 was that Trump’s birtherism was a turd of an issue, while Trump’s immigration resonated with non-activists like Joe Pigfarmer (i.e., it translated into votes from common folk). But that’s on Ann Coulter, not Trump. Trump picked an issue in 2011 that went nowhere, and an issue (Ann’s issue) in 2015 that took him to the White House. But the Abe activists had the same level of excitement both times, and the same willingness to excuse Trump’s later abandonment of his signature theme (me from September 2016: “Trump’s just making shit up as he goes along; his promises of ‘trust me’ are worthless. He proved my point on the birther issue, and if he’s elected, he’ll prove it again on the border wall and the mass deportations”).

So what does this tell us? That there’s a segment of Trump superfans who are in it for the guy, not the issues. Understanding that, the fact that MAGA has migrated from Trump as a means to an end (immigration restriction) to Trump as an end in itself makes perfect sense.

Steve Bannon at CPAC 2022 told MAGAs that the survival of Trump (not America, but Trump) hinges on catering to the needs of Hispanics and blacks:

The Hispanic and African-American communities are some of the most conservative communities…. We could actually get a Senate that is filibuster-proof, and the return of Donald J. Trump to the White House. We will have 55 or 60 percent of the Hispanic vote. We have to show them that we EARNED that vote by action.

Do these sound like the words of someone representing a movement that cares about the antiwhite apartheid?

Never forget that MAGA whites stayed home in the Georgia runoff because Trump told them to (and spare me your angry emails; Trump himself has copped to having depressed the Georgia vote). Meditate on that a moment: After a summer of BLM anarcho-tyranny, after a campaign season of Democrats promising defunded cops, open borders, and free everything for illegals, MAGA whites were willing to hand Congress to the Democrats because Trump was pouty.

What does it tell you when people who have the most to lose from antiwhite apartheid hand the reins of power to pro-apartheiders because Trump told them to? It means MAGA whites have something they consider more important to fight for than their own rights or survival. It means no help is coming from MAGA.

So, a double-barreled assault. Establishment GOPs don’t want to fight the apartheid, and they’ll depress the white vote if that’s what it takes to discourage discussion of antiwhite issues (as Ryan Girdusky has pointed out, many rural white GOP voters are sitting out the primary because establishment candidates are avoiding issues like crime, immigration, and CRT), and MAGA leaders don’t want to fight the apartheid either (“We need 60 percent of Hispanics to fight for Trump!”), and they’re willing to depress the white vote as well, as they did in Georgia.

Making things worse, now that Roe’s gone, so too is peaceful coexistence with pro-lifers, who can actually save the wabies now, and damned if, after fifty years of impotence, they’re gonna let other issues take precedence. Think I’m kidding? Twitter-search “abortion” “babies” “worst” “crime.” Pro-lifers are furious that some rightists focus on street crime instead of waby-murder.

Just a few weeks ago, Florida’s Hillsborough County lost a strong conservative circuit court judge who should’ve sailed to reelection as he had in previous years. He lost an easy contest because he’d forbidden a 17-year-old girl from getting an abortion. His argument? Her IQ was too low. His far-left oygenflaygin pro-abortion opponent eked out a victory when she should’ve been trounced.

Think about that; we now have one less conservative judge because, as a pro-lifer, he really, really wanted a low-IQ teen to reproduce. Just like Trump in Georgia, pro-lifers will throw a winnable election for what they perceive to be principle, but what is, in reality, pure selfishness.

Meanwhile, Con Inc. is marshaling pro-lifers to attack GOPs who dare to address apartheid-adjacent issues (see here and here). I saw this coming; in 2021 I predicted that should Roe be overturned, Con Inc. would use abortion to redirect priorities away from race-associated issues like immigration and crime.

So, another double-barreled assault: the conservative establishment on one end, pro-lifers on the other.

Obviously, a lot can change in the course of an election year. We’ll see how Trump’s picks fare in November, and we’ll see if, as polls suggest, abortion’s energized the left to an extent that the GOP doesn’t get the midterm sweep it hoped for.

That might give whites some small leverage to argue that the Con Inc., MAGA, and pro-life tactic of back-burnering apartheid and antiwhiteness isn’t working.

That’s a big maybe. But it’s better than nothing.

All is not lost.