Motte and Bailey vs. Outpost and Heartland 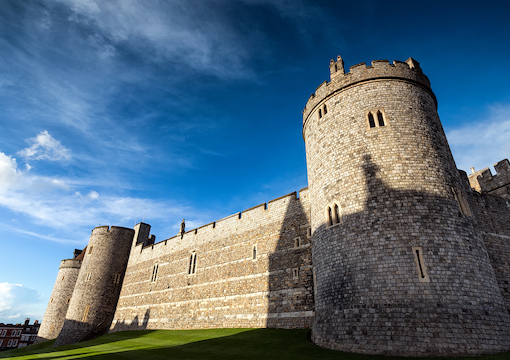 One oddity of discourse is that novel phrases seem more likely to catch on if their meanings are opaque than if they are self-evident. Having to know a semisecret code makes phrases such as “motte and bailey argument” more popular, not less.

For example, as a term for when something passes its peak, “jump the shark” has become an instant cliché in the 21st century. This is curious because to grasp its meaning, you have to have heard of a 1977 episode of the TV sitcom Happy Days in which Henry Winkler’s Fonzie, waterskiing in the ocean, is vaguely menaced by stock footage of a Jaws-like great white shark.

Personally, I missed seeing that episode. In fact, I never heard anyone mention it until decades later when I started reading laborious explanations of what the suddenly popular phrase “jump the shark” referred to. Indeed, I never watched a clip of the scene until 2020. (And, yes, it is lame.)

The obscurity of the etymology seemed to add to its appeal. Once you’ve put in the labor to learn what “jump the shark” means, you feel like a member of the club of insiders and thus are less likely to forget it.

A similar innovation, on a higher intellectual level, is anti-postmodernist philosopher Nicholas Shackel’s 2005 coining of the term “motte and bailey doctrine” to refer to a particular form of slippery argument for which we should be on the lookout. Psychiatrist Scott Alexander, who emerged as the most brilliant new public intellectual of the decade that just closed, has done much to popularize the term.

But what does it mean?

“In truth, in the real world we witness fewer examples of the motte and bailey strategy and more of the opposite.”

Shackel said a motte and bailey argument is one intended “to insinuate an exciting falsehood, which is a desired doctrine, yet permit retreat to the trivial truth when pressed by an opponent.”

For instance, in recent years it has become popular to argue that sex and race are social constructs, which is widely assumed to have far-reaching social and moral implications. But when pressed to defend themselves in argument, proponents sometimes fall back to pointing out that, say, the gender of the word “moon” is female in French and male in German. (Of course, mostly they just hurl ad hominem invective at anybody who dares question their faith.)

The motte is…wait a minute while I look this up on Wikipedia…the highly defensible stone stronghold built on a typically artificial mound, while the bailey is the lightly defended courtyard next door, which contains the feudal lord’s stables, blacksmith shop, kitchen, and other mundane but useful buildings. If attacked, the defenders can first try to stop the enemy at the bailey’s palisade, then if necessary fall back to the motte and pour boiling oil on the attackers.

Okay…but how does that apply to typical postmodernist arguments? Alexander explains:

If you were a medieval lord, you would do most of your economic activity in the bailey and get rich. If an enemy approached, you would retreat to the motte and rain down arrows on the enemy until they gave up and went away. Then you would go back to the bailey, which is the place you wanted to be all along.

If you are a devoted reader of Scott’s SlateStarCodex.com blog, this may seem clear. But if you aren’t, it’s not at all obvious which should be considered the most valuable piece of real estate: Your towering motte no doubt cost far more to construct than the low-lying sheds of your bailey. The motte is your final redoubt. As long as you hold on to it, you are still in the game. But if your motte falls, you lose. (In case you are wondering, neither the motte nor the bailey includes the surrounding expanse of farmland, which is what medieval landowners really got rich off of.)

The fact that most people find the term “motte and bailey argument” baffling and that other people (i.e., me, even after reading up on castle architecture) find it confusing may well make the phrase more popular with those who aren’t befuddled by it.

In truth, in the real world we witness fewer examples of the motte and bailey strategy and more of the opposite: people fighting furiously to hold on to a remote outpost so that their valuable heartland goes unthreatened.

Outpost and heartland defenses are a regular feature in both the geographic and ideological worlds.

For example, consider Chinese geopolitics. Why does Beijing bother to oppress the natives of its far-flung inland regions of Xinjiang and Tibet, when those cold and dry provinces are much less valuable than fertile eastern China?

In contrast, in the empty west of China, the indigenous peoples are less amenable. The Buddhist Tibetans aren’t culturally Han and don’t want to be, and the Muslim Uyghurs of Xinjiang are half-Caucasian.

Beijing’s struggle to Sinicize those isolated provinces is expensive, and the population is negligible compared with the rest of China, with Tibetans and Uyghurs together making up only about 1 percent of China’s population. Beijing’s abuse of these natives is the prime cause of all the bad publicity the rulers of Chinese are subjected to in the outside world.

So why do they do it?

Consider Tibet, the world’s highest plateau. Most of it is too high, at an average elevation of 14,400 feet, for lowland Han Chinese to thrive. In contrast, Tibetans typically inherit sophisticated genetic adaptations that allow them to live healthy lives at altitudes at which outsider women can’t confidently carry babies to term.

But if Tibet isn’t terribly useful to the Chinese, keeping India on the far side of the Himalayas is. Tim Marshall writes in Prisoners of Geography:

If China did not control Tibet, it is always possible that India might attempt to do so. This would give India…a base from which to push into the Chinese heartland, as well as control of the Tibetan sources of three of China’s great rivers, the Yellow, Yangtse, and Mekong…. It matters not whether India would want to cut off China’s river supply, only that it would have the power to do so.

For example, Ethiopia is currently building a vast dam on the Blue Nile, which provides most of the water to Egypt and Sudan, much to the concern of those downstream countries. There’s no evidence at present that Ethiopia wants to choke Egypt and Sudan, but it’s not unreasonable for them to worry. China, however, owns its own highlands, so all it needs to do is keep the Tibetans down.

Similar to Tibet, Xinjiang, home to the Eurasian Pole of Inaccessibility, is not a particularly desirable place. But as long as Beijing can suppress separatist movements, there is no possibility that any other power can control it and thus threaten the Chinese heartland from that direction.

A sensible-sounding compromise in these situations is the creation of neutral buffer states, such as Finland was on the border of the Soviet Union during the Cold War. While America feared the Finlandization of Western Europe, Finlandization wasn’t so bad for Finns, who got to keep their capitalist system as long as they went along with Soviet foreign policy.

But as Jared Diamond points out in his recent book Upheaval, Finland’s ability to not be reduced to a satellite by its vast neighbor was testament to the “strong national identity” of the Finns.

The Soviets were content with a neutral Finland because they remembered how the Finns had defeated them in the opening months of the Winter War of 1939–40. During the Continuation War, John Keegan points out, German liaison officers rated the Finnish army as man for man better than the German army, making it the best land fighting force per capita of WWII.

If there were enough of them, Finns would rule the world.

In contrast, most countries that are weak enough to serve as buffer states are too disunified and ineffectual to avoid being preyed upon by the more powerful. Thus, maintaining Iraq as a neutral zone between Iran and the American allied countries of the region is unlikely because Iraq is ethnically diverse and thus susceptible to outside troublemaking.

Analogously, the same outpost vs. heartland mechanism can be seen in many ideological disputes, affording numerous depressing examples of compromise failing.

The logic is that if you are constantly attacking your enemies on their own turf, they can’t be conquering your terrain. The best defense is a good offense.

For example, is gay marriage working? Has the decline in straight marriages been related to the promotion of gay marriages?

Nobody asks these questions, in part because as soon as it became apparent a few years ago that the courts would push through gay marriage, the Establishment suddenly decided that the right of ex-men in dresses to shower in the women’s locker room could not be abridged. Ever since, sensible people have been too busy suggesting that maybe World War T is not such a good idea to ask tough questions about gay marriage.

Likewise, as the genetics of race become ever more scientifically apparent in the age of Ancestry.com and 23andMe, the claim that race does not exist genetically has become ever more often insisted upon.

The people who assert this are usually explicit about their outpost and heartland strategy, arguing that if race doesn’t exist, then logically there can’t possibly be racial differences in average intelligence between whites and blacks.

But is protecting the self-esteem of blacks the ultimate heartland in this ploy? In reality, there aren’t enough black intellectuals of the first rank to explain the popularity of this stratagem.

In the wake of the 1994 publication of The Bell Curve, it finally dawned on me why so many of the intelligentsia raged against intelligence.

Banning scientific discussion of black-white IQ differences is largely an “outpost defense” of what they really care about, which is preventing awareness of gentile-Jewish IQ differences. If nobody is allowed to mention the outpost—that the average IQ difference between blacks and whites explains quite a lot about modern America—then it is less likely that an ensuing discussion would ever occur about the heartland: how IQ gaps between gentiles and Jews explain perhaps even more.

We saw this recently with the hilarious brouhaha in which bumptious New York Times columnist Bret Stephens, former editor of The Jerusalem Post, mentioned in passing that Ashkenazi Jews have higher average IQs, not realizing that nobody is ever supposed to let this slip in public. His employer then memoryholed the offending facts from his archived column.

If you possess the term “outpost and heartland” in your conceptual vocabulary, you’ll see this device in operation all over the place.

But “outpost and heartland” is probably too self-explanatory to ever catch on.