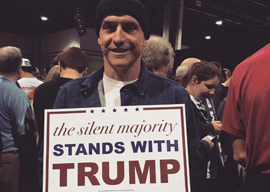 The author at the Atlanta, GA Donald Trump rally

Yesterday I saw Donald Trump speak live at a rally in downtown Atlanta, and I stand here before God and man to report that not once did he mention the topic of race.

This is disconcerting for multiple reasons, not least of which is the fact that the primary criticism lodged against him is that he’s a racist.

Fresh off a thumping of his robotic GOP rivals in South Carolina on Saturday, Trump was greeted by a rapturous crowd that was almost entirely white”or, as those who see something innately wrong with such a thing are fond of saying, it was “overwhelmingly” white. More than half of his opening speakers were black, but they didn”t make a point of being black like so many black people do these days in the name of, er, fighting “racism.”

Meanwhile the Democrats and liberals and progressives and communists and Alinskyites never shut the fuck up for a nanosecond about race, all while accusing those who never talk about race of being racists. Maybe I’d believe that their true motives were anti-racist if they were to, oh, stop shitting on white people for half a second. They make ceaseless declamations about the innate moral turpitude of whites and white culture and “whiteness” and how this can only be cured by breeding white people out of existence, yet for some reason they believe this does not constitute negative ethnic stereotyping nor genocidal intent in any possible way in any conceivable universe from here to eternity. Ironically, the ones who prove that race matters are the ones who insist that race doesn”t even exist.

If you don”t understand what’s wrong with that scenario and why it strongly suggests that planet Earth is not flat but rather upside-down, you also are likely dumbfounded about why Trump’s appeal runs so deep. We live in a society that is reputedly white supremacist, yet if any white person is not openly apologetic for their skin color, they instantly commit career and social harakiri. In this “white supremacist” climate, you”re a racist simply if you don”t self-flagellate for being white. How could both things be possible? They cannot, and the idea that we currently live in a white supremacist society is the biggest Big Lie I”ve witnessed in my lifetime.

“The America of my childhood was much whiter, but it was also much more prosperous.”

On the other side of America’s two-party schism you have Hillary Clinton and Bernie Sanders openly and explicitly courting black and Hispanic voters, yet this is magically never framed as racial pandering. Trump, on the other hand, doesn”t make a peep about white people, yet somehow he’s the Exalted Cyclops. The fact that white nationalists love him as if he were a big bowl of vanilla ice cream with whipped topping and marshmallow jimmies is mostly due to the fact the he refuses to bow down and grovel before the Gods of Critical Race Theory.

To my knowledge Trump has never uttered a word implying it’s great to be white; he simply doesn”t seem to feel a need to apologize for it, either. He doesn”t even seem to comprehend why race might matter. But modern American culture and taboos have tilted so lopsidedly in an anti-white direction, merely refusing to feel guilty for being white is depicted as the vilest and most violent form of racial bigotry imaginable.

I believe that race matters, but in Trump’s case I feel it’s largely an intentional diversion on the part of his enemies. I”ve listened to hours of Trump’s speeches and don”t ever recall him using the phrases “white people” or “white voters” or “white Americans.” Nor do I ever recall him taking a swipe at someone for his or her ethnicity”only their religion if it happens to be Islam.

In his own odd way, Trump is even mildly PC. When he criticizes China’s or Mexico’s trade policies, he’s always extraordinarily careful to note that he loves Chinese people and Mexican people and that their leaders are far smarter than ours. He even goes out of his way to say he has a “great relationship with the blacks.” Again and again he says the people he truly hates are the ones in charge of this country who are rapidly selling it piece-by-piece to other countries. This billionaire’s focus is economic rather than ethnic.

As much as it will disappoint the white nationalists out there, Trump did not utter a syllable in his hour-plus speech that could logically be construed as a white nationalist sentiment. But nearly every word out of his mouth suggests that he’s a diehard economic nationalist.

Trump extemporized about how Apple computers are made in China and how Ford, Nabisco, and Carrier Air Conditioner are packing up and leaving for Mexico. He also said that the only way to combat Chinese and Mexican economic nationalism was to slap a 35% tax on any imports from expatriate American corporations who try to peddle their foreign-made wares in the USA. This theme”a tragic loss of American economic sovereignty”was a primary motif back when he announced his candidacy, yet the press completely glossed over this and fixated over one brief but factually accurate statement that Mexico was sending rapists and criminals to America.

Despite the fact that Trump hammers on economic issues and hardly ever makes a whisper about ethnic issues, the press seems content to call him a bigot and a hater and every other scare word that whips most people in line these days.

One might be forgiven for noticing that the media and the leftists”as if there’s a substantive difference”that assail Trump hone in entirely on race and completely gloss over Trump’s far more voluminous comments about economic globalism and the outsourcing of America’s industrial base. They don’t want to touch that issue with a ten-foot selfie stick.