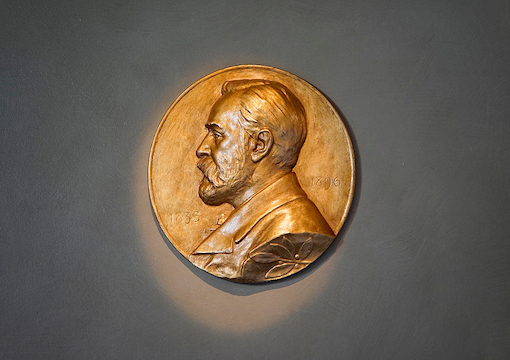 Time for my annual Jan. 1 housecleaning of unused ephemera I wish I could’ve included in the previous year’s columns.

In February, socialist Norwegian parliamentarian Petter Eide (dumb name, dumber ideology) nominated BLM for a Nobel Peace Prize. When asked how he could do this considering the amount of violence that accompanied BLM protests, Eide told The Guardian, “Studies have shown that most of the demonstrations organised by Black Lives Matter have been peaceful. Of course there have been incidents, but most of them have been caused by the activities of either the police or counter-protestors.”

I emailed Eide (he speaks English because you have to when your native tongue is shared by only 2,000 people):

In May/June 2020, BLM laid waste to the historically Jewish Fairfax District near my home, and the Rodeo Drive district where I reside. The violence was not caused by police or counter-protesters. Do you believe you know better about what happened in my neighborhood than I do? Would you be even remotely open to the possibility that you’re not as well-informed as the residents who were actually there?

He responded immediately, asking me to call him. I told him I prefer on-record interviews to be via email, so there can be no disputes about misquoting (I lied; I just didn’t want to hand-transcribe an audio recording). He said I’d have to call him. We went round and round like that for several days (“Call me!” “No.” “Call me!” “No”) until I realized the poor bastard is just lonely and wants an American phone pal.

I didn’t think the story was interesting enough to merit me having to hear some Scandinavian nonentity’s ramblings. I’ll do a lot for my readers, but I draw the line at spending three hours on the phone listening to some douchebag discuss A-ha.

“Yes, Petter, I agree that ‘The Living Daylights’ is an underrated song, but it set the wrong tone for the harder-edged Dalton years. Yes…yes…Gladys Knight’s ‘License to Kill’ was far more incongruous. Yes…uh-huh…yes…um, look, someone’s at the door, I gotta go.”

It’s False Because We Want It to Be

Sometimes I can’t include something in a column because I received it off the record. In February, the top reporter at a major American newspaper slammed a survey showing that liberals greatly overestimate the number of blacks killed by police each year. “Scoop McGee” said the survey was bogus, but he didn’t explain why. I asked him his reasons. He insisted that his response be off the record, and I agreed. And he was like, “We don’t have reasons; we just think pollsters shouldn’t be asking such questions.”

In July, a celebrity auction I attended up the street from me at Julien’s offered two exclusive Colin Kaepernick items: a signed game-worn jersey, and a signed Super Bowl backup jersey. Nobody went for ’em. I couldn’t find a way to work that into a column (as much as I wanted to show how even the sports memorabilia community has rejected the guy). So I’ll mention it here: People who’ll pay $20,000 for a Tom Brady shoelace won’t even pay a buck for a signed Kaep jersey. Take a knee on that, asswipe.

I asked Weill to correct the story, but she said a YouTube commenter had claimed there totally is a Simon Wiesenthal Center in Santa Monica.

I sent her links to the SWC website, and media stories that correctly identified the location of the MAGA scuffle. She still didn’t believe me. I scolded her: “It’s amazing that you’ll choose the erroneous words of a single YouTube uploader over all the other available evidence.”

Too minor an incident for a column, but still instructive in that it took three attempts to get an impossibly simple correction from a Daily Beast “journalist” over an error that the simplest fact-check could’ve prevented (wait till I tell Weill there’s no Louvre in Compton; there goes her latest scoop!).

Cancel THIS, You Mutha!

On Dec. 2, Jewish actor Joshua Malina wrote a fiery Atlantic op-ed calling for Mel Gibson to be canceled for his anti-Semitism (indeed, Malina accused the entire industry of anti-Semitism for not having permanently exiled Mel). Malina, who cohosts a podcast with Rabbi Szhultitzki Struczman (I made that up) and Hrishikesh Hirway (that one’s real), made a big point of saying that no decent person in Hollywood should ever consort with a Jew-hater.

So I emailed Malina, who’s appeared on Law & Order: SVU several times, to ask how he could work alongside Ice-T, a vocal champion of the (late) virulent Jew-hater Khalid Abdul Muhammad, who brazenly called for the extermination of Jews in the 1990s. Ice-T’s support for Muhammad was not a brief flirtation. It stretched from expressing gratitude to Muhammad in the liner notes of 1993’s Home Invasion, to giving “rousing speeches” at Muhammad’s L.A. appearances in 1994, to endorsing Muhammad’s “Million Youth March” in 1998.

I asked Malina why he was fine with making good lucre alongside such a Jew-hater, and if he would publicly advocate Ice-T’s cancellation (thus eliminating Malina’s chances of ever being asked back on the show, and nixing a bunch of potential paychecks).

Malina replied, expressing shock about Ice-T’s history with Muhammad; he promised to send a lengthier response after the 15th.

The best way to not be exposed as a cancel-culture hypocrite? Don’t try to cancel people.

Remember Mary Lemanski, the Chicago Democrat Party official who said the children killed by the Waukesha Christmas parade mass murderer had it coming for being white Wisconsinites? Well, I’m not saying I had anything to do with bringing that story to the press. And I’m definitely not saying I brought it to the press and then emailed her the next day cooing, “Sorry you got canceled; I’d love to hear your side of the story.” Because that would be some Chris Rock-level “heard ya got robbed” dickishness.

But I did email her. I found her quite chatty, and at first I was thinking, “Cool, this is some juicy stuff!” But within minutes, I realized I was speaking with a profoundly unwell individual, and I saw no need to further hold her up for ridicule. She’s no longer a public official; it should end there.

And for the record, opposed as I am to “canceling,” I do believe that public officials are fair game (and in Lemanski’s case, the fact that the sixth little parade victim was still gasping for life as she wished karmic death on him kinda “triggered” some anger inside me).

I signed off and encouraged her to get professional help for her mental health.

I was less forgiving of Zoomer hack Sylvia Goodman of the Chicago Tribune. She hunt-and-pecked a piece that tried to rehabilitate Lemanski by taking her at her word that when she wished retribution on the children, she wasn’t referring to the Waukesha children, but just…children in general (I’m not sure how that’s any better). When I sent Goodman the screenshots not me had provided to the press, which 100% prove Lemanski was specifically talking about the Waukesha kids, Goodman claimed that because she couldn’t read Lemanski’s mind, she wouldn’t challenge her false claim.

I reminded newsbimbo that it’s not a reporter’s job to read minds but rather to present both sides of an issue and let readers make up theirs.

Goodman had also tried to garner sympathy for Lemanski by supporting her claim that she’d been “doxxed” over her hateful tweets. When I showed Airhead R. Murrow screenshots proving that Lemanski herself had made her personal info public on social media, literally daring people to come at her, Goodman replied that for the purposes of her piece, she’d altered the definition of doxxing to mean “harassment,” not “the publishing of private information” (the actual definition).

I was about to blow a gasket when I saw her LinkedIn and realized that Goodman is just an intern, and I was like, “Why is a 53-year-old man who’s been in the public eye since 1991 arguing with a fucking intern?”

So I let it go. I thought about contacting her editor, but why bother? If the Trib is letting unsupervised interns write feature stories, management obviously doesn’t care about standards.

I’ll close on a personal note. I belong to an exclusive club of writers who can never gauge their “reach” because most people who read us never admit it publicly. Often, when a person of note tells me, “Loved your column,” it’s accompanied by “Of course, you’ll have the good taste not to mention that I spoke to you.”

I get paid to write, which is the greatest job on earth. But if one day that were to cease, you mugs will never hear from me again. A guy like me can’t self-publish on Amazon or self-promote on Substack because my work is banned on Amazon and to get subs via self-promotion I’d have to include positive testimonials, which I couldn’t do without violating many trusts.

I don’t always mind when something I’ve written is “appropriated” elsewhere. On Jan. 31 I wrote a gag about “social justice commercials for products that have no need for them, like Cheez-It—because dammit if Cheez-It stands for anything it’s social justice.”

The very next Saturday, Feb. 6, SNL did a sketch about Cheez-It doing a “woke” commercial where the company brags about how it stands for social justice.

“Parallel thinking” does occur in comedy, but there are two massive coincidences at play here: The hugely specific gag was repeated verbatim, and it aired on the first SNL after my column was posted. But I was flattered. I’m not a comedy writer, so if someone who is found my work worthy, they’ve honored me.

I was less honored last week when a conservative darling repeated almost word-for-word a point from my Dec. 21 column about how the June 2020 statement by health professionals claiming that BLM protests were more important than Covid precautions represents the pivotal moment when the public lost faith in the medical establishment. Twitchy hailed the purloiner for having “nailed the moment that single-handedly destroyed trust in public health officials.”

As I’d done a week earlier.

No harm, no foul. But one day, I’m gonna re-Jewify my name and go back to making films. In 1998, I chose David Stein because it’s easy to pronounce. I’ll do the opposite this time and choose something even I can’t pronounce.