OK, Let’s NOT Kill Everyone in China 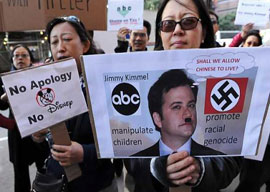 Last Saturday, hundreds of humorless Asians, their eyes slanted with fury, gathered outside ABC studios in LA to protest talk-show host Jimmy Kimmel’s alleged advocacy of Chinese genocide. The furor didn’t even involve a statement of Kimmel’s, but rather that of a child during a roundtable discussion on his show who suggested we should “kill everyone in China.” Protesters carried signs that said, “TEACH KIDS TO LOVE, NOT TO KILL,” “FIRE KIMMEL,” and “HATE SPEECH IS NOT FUNNY.” Some signs featured pictures of Jimmy with a Hitler mustache and a swastika. The signs were kind of cool-looking and whoever made them is obviously very good with computers. Actually, that’s part of the problem.

Asians are so good with computers that if you make them mad on the Internet you had better be prepared for a tsunami of terabytes in retaliation. I recently made the mistake of doing a humorous piece about “Asian privilege,” which was nothing more than an article about white privilege with the word “white” replaced with “Asian.” Virtually no slopes got the joke and my phone almost overheated with angry emails, re-Tweets, Facebook posts, and texts. (How did those tenacious riceballs get my number?) I even won an award for “Hipster Racism.” I didn’t apologize and eventually they went away. That’s the way it works with the Perpetually Offended. They feed off apologies. They’re vindicated by them. The more apologies you give them, the more they demand. And Asians are particularly demanding.

“People look really stupid shaking their fists at a clown.”

Back in 2008, Kimmel’s ex-girlfriend Sarah Silverman made a joke about how she considered trying to get out of jury duty by pretending to “hate Chinks.” She said she didn”t even go through with it because she “loves Chinks.” Some stupid committee demanded an apology and she ridiculed them by saying, “As a member of the Jewish community, I was really concerned we were losing control of the media.” It was a checkmate move, because it left the protestors shaking their fists at a clown. People look really stupid shaking their fists at a clown.

The Kimmel protestors are even easier to mock. They were shaking their fists at a child clown, but Jimmy’s bosses decided to take the capitulation highway instead, and it went worse than the Great Leap Forward. It all started a month ago when Jimmy Kimmel Live! aired a new segment called “Kids Table” wherein a table of kids in suits say the darndest things about politics. When Jimmy brought up the massive amount of money we owe China, one of the kids suggested we just kill them all. Jimmy chortled at how darndest that thing was and they moved on.

Sorry, not good enough. The Chinese-American community transmogrified this event into a seminar wherein ABC executives were training children to kill a billion innocent Asians. Social-media outlets were flooded with Oriental anger and a poorly written White House petition demanding Kimmel be “investigated” got over 100,000 signatures. According to the South China Morning Post, the petition revolved around “boycotting Kimmel’s decision to air the comment on his show.” How exactly does one boycott a decision that’s already been made?

On October 28th, after four days of twisted hysteria, ABC issued a formal apology. Kimmel repeated his apology on his show that night. They removed the video from their YouTube channel and permanently cut “Kids Table” as a segment.