Putting Out the Fire With Lighter Fluid 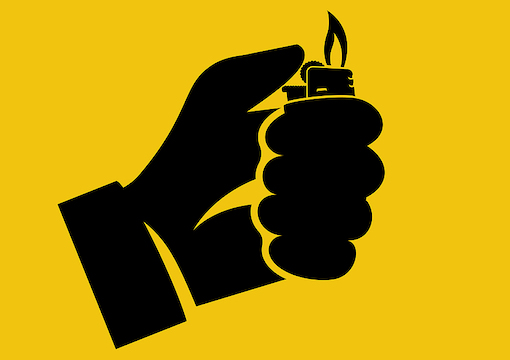 After race car driver Bubba Wallace’s NooseCAR debacle last week, it would have taken somebody truly dumb and publicity-crazed to breathe life into this week’s even more absurd hate-crime allegation: biracial 18-year-old Althea Bernstein’s assertion that four “classic Wisconsin frat boys” squirted lighter fluid on her and set her ablaze by tossing a lighter into her car in downtown Madison, Wis., during an Antifa riot.

While nobody in the national press has dared express any skepticism about this hilariously unlikely tale, it hadn’t been getting the giant push that would have been expected if anybody of any importance were convinced this whopper were true.

After all, if Bernstein’s yarn about roving racist frat boys in Hawaiian shirts randomly incinerating a Jewish-Unitarian Woman of Color actually happened, it would be gigantic news, far bigger than, as Joe Biden would say, what’s his name—Pink Floyd? Boy George?—that drugged-up bouncer who wound up dead while resisting arrest and suddenly became history’s greatest saint, or that drunk driver who got himself shot after stealing a cop’s Taser and lighting him up with it.

But, c’mon… Frat boys setting a semi-black girl on fire in super-liberal Madison is, obviously, Tawana Brawley/Jackie Coakley-level hate hoaxery, a silly teenager’s attempt to improvise an excuse for being where she shouldn’t have been.

Showing more caution than is typical in these circumstances, the national press reported Bernstein’s claims with a straight face, but then did only the minimum to follow up on them. Most newspapers just ran an initial wire service report, then a brief article about Bernstein’s appearance Friday on ABC’s Good Morning America.

No progressive pundit has yet written up Bernstein’s tall tale yet, presumably in the hope that when law enforcement eventually debunks it, nobody will remember it the way too many citizens remember Jussie Smollett.

But then, just as the Althea Bernstein story was being allowed to quietly fade away over the weekend, that special someone—Meghan Markle, the Duchess of Sussex, wife of Prince Harry—stepped forward to make a really futile and stupid gesture to keep this latest Hate Hoax from being allowed to be forgotten the way the cooler heads in the media had wished.

“A lot of people will believe anything these days as long as it is inspired by antiwhite racism.”

By Monday, society, fashion, and Jewish magazines like Town & Country, ELLE, Cosmopolitan, and Forward were all over the story.

As I’ve often pointed out, progressive Madison has some of the biggest racial disparities in the country, in part because the U. of Wisconsin attracts smart whites, but also because Madison, like nearby Milwaukee, has unusually dysfunctional blacks due to Wisconsin’s high welfare in the 1970s having attracted single mothers.

But Miss Bernstein has a more complicated background than the typical Madison African-American. The black sportswriter Jason Whitlock pointed out recently that “many of the highest-profile and irresponsible celebrity racial justice warriors are mixed race, half white and half black,” such as Jussie Smollett, Colin Kaepernick, and Bubba Wallace. Whitlock went on:

Imagine being half black, half white and raised by the white side of your family. You’re immersed in white culture and sensibilities but society assigns you a black classification and you’re treated as the second coming of Nelson Mandela. You love your family. You know your family loves you. But society at large rejects the white half of you.

That’s going to create some bitterness.

That’s going to create a heightened level of sensitivity around race that’s difficult to manage and interpret in your teens, twenties and thirties….

There’s no fight for rights. It’s a group of millennials publicly sorting out their feelings and looking for the approval of white society.

White love is the cure for all that ails them.

And pretty soon you are talking on the phone to Prince Harry.

Miss Bernstein claims she wasn’t at the infamous riot that was going on in downtown Madison at 1 a.m. on Wednesday, June 24; she was just driving next to the riot.

That night the leftist Mostly Peaceful Protesters toppled two statues that had long been icons of Madison progressives—abolitionist Union Army hero Hans Christian Heg and “Forward,” a female symbol of progress designed by a woman sculptor in 1895—and they beat up a gay Democratic state senator, Tim Carpenter.

Most frighteningly, around 1 a.m. a week ago, the moment Bernstein says she was being attacked with lighter fluid, the Madison mob set fire, using lighter fluid, to the City County Building, home to the jail and the 911 call center. The call center had to be evacuated, but at least the fire was put out before the 180 inmates burned to death.

This set off a squabble between political leaders of the liberal Dane County, where Trump won only 23 percent of the vote, and extremely liberal Madison. The county officials were outraged that the city leaders had let BLM/Antifa set their mutual building on fire.

The coincidence that both the alleged arson and the documented arson involved lighter fluid has not been much remarked upon. (You can see a security-camera photo of a rioter spraying the jailhouse with the kind of lighter fluid used to get charcoal burning here.)

I don’t know what the real story is behind young Miss Bernstein’s politically correct fiction about homicidal frat boys and lighter fluid, but let me make a few wild surmises.

Perhaps her mom wouldn’t let her take the car unless she promised not to go to the riot. But riots sound like fun when you are 18, especially after going stir-crazy during the lockdown. And, of greatest importance for an 18-year-old girl, at a riot there are always boys.

By the way, for ten weeks, as you may recall, the Establishment told everybody that the current pandemic was the worst thing in the history of the world. But then in late May the conventional wisdom suddenly forgot about the virus and switched to the death of George Floyd as the most important event ever, so therefore young people should form vast mobs and Mostly Peacefully Protest. Is it any surprise that the number of new coronavirus cases in Madison has quadrupled over the past week?

But bad things tend to happen at riots, such as arson and, say, blowback from arson. While it can be exciting watching somebody try to burn down the county jail, lighter fluid and flame make a volatile combination. People can get hurt.

But getting burnt during the mob’s arson spree can be not just painful, but legally worrisome. Lighting fires may seem like summer-camp fun and games, but setting civic property on fire is a felony. And witnesses to felonies can be subpoenaed.

So before you go to the emergency room, you would need a scenario, a plotline involving lighter fluid.

Granted, four right-wing frat boys shouting the N-word and setting you on fire during a Black Lives Matter riot is a truly stupid story. But a lot of people will believe anything these days as long as it is inspired by antiwhite racism.

Now, I don’t know if any of my speculation is true. But you have to admit that something like this is more plausible than the spiel Meghan and poor Harry fell for.