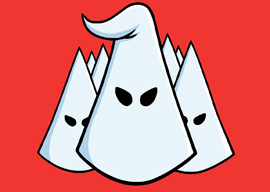 So many white “dindus.” Last week, in the wake of the car-ramming incident at the Unite the Right rally in Charlottesville, hundreds of alt-rightists and white nationalists decided to drop the bravado and go all “dindu nuffin.” “Antifa started pickin’ on us and we wuzn’t even doin’ nuthin’.” It was an overnight personality shift that would have shocked Ebenezer Scrooge. Prior to fash-boy James Alex Fields’ “bowling for communists” moment, all I saw on social media was a torrent of fevered posts and comments from far-rightists gleefully anticipating the epic brawl that was about to go down. There was excitement in the air…the rally was going to be a battle royal between noble Viking warriors and thuggish Antifa goons. It was going to be legendary.

Then some moron in a Challenger had to go ruin it for everyone.

“Based Stickman” was a funny meme; “Based Carman,” not so much. Heather Heyer’s death gave the media everything it needed to create a new martyr for peace and tolerance (even though she was fighting alongside a bunch of goons who are unpeaceable and intolerant). The morning after the rally, in an obvious attempt to distance themselves from the previous day’s violence, the “rarin’ to fight” righties abruptly shifted personas. The “yee-haw, to battle!” crowd turned into a bunch of dainty Southern belles with a bad case of the vapors. “Brawl? Oh my, nevah. We were just hoping for a quaint little afternoon in the park.”

Now, to be very clear, there were plenty of people at the rally who did not seek confrontation, and who just wanted to make their voices heard regarding the removal of Confederate monuments. I’m not the first person to point that out, but it’s only fair that I do. But a whole bunch of other Unite the Right attendees were fully expecting a brawl and looking forward to it. All year, people in alt-right and white nationalist circles have been obsessed with countering Antifa violence with rightist violence. Battles are celebrated, memes are created, legends are born. It has, without question, become a “thing” on the far right. “Just wait for the next Nationalist rally, it will be Sacramento 2.0. It will end with the nationalists outnumbered but with the Antifa attackers laying in piles (sic) of their own blood..again. LOL,” wrote one of my Facebook “followers” earlier this year, in a comment similar to hundreds of others I’ve seen since January. The rightist vs. Antifa brawling is something that folks on both sides have come to look forward to…rightists in particular because generally they’ve been “winning” the ground war.

“I can’t say it strongly enough—events like Unite the Right are nothing but a whole lotta bad road.”

So there was a lot of giddy anticipation in the weeks leading up to Charlottesville. And technically, the right won that one, too, from a body-count perspective. But as Ray “Boom Boom” Mancini can tell you, sometimes you can win just a little too hard. When the fighting goes from broken noses to broken bodies, odd how it just doesn’t seem as fun anymore. And yes, I know that the rally organizers had a permit, and yes, I know that the city and police totally fucked them over, and yes, I know that the right to assemble is a sacred constitutional guarantee. But claiming “rights” when someone is arguing cause and effect is a supremely leftist way of debating (“Pay for my abortion!” “No.” “But I have the RIGHT to an abortion!” “Yes, but you also should have known you’d get pregnant by having unprotected sex”).

Enough people on the alt-right/white nationalist side were so pumped up for a brawl (as were those on the Antifa side) that bloodshed was inevitable. And anyone should have been able to foresee that if the blood ended up being on the hands of someone on the right, the consequences would be dire.

Don’t get me wrong; I’m all in favor of standing up to Antifa thuggery, and there’s a part of me that cheers a little every time I see some leftist prick get his or her nose punched in (especially since I first started dealing with Antifa hooligans up in Canada where, due to restrictions on “right wing” speech and expression, it was damn near impossible for any group on the right to counter them). But just don’t deny that the brawling was something a lot of you were looking forward to, either as participants, spectators, or online observers. The day after the rally, it was embarrassing to see so many “based warriors” whining about how “we never wanted no trouble.” Because that’s total “dinduism,” no different from the responses of every black protester who lost a fight that day. “I wuzn’t even tryin’ to protest; I wuz just on my way to the store to buy a shelf for all my honors-student awards and some racists jumped me!” It’s pathetic. So is the knee-jerk defense of James Alex Fields. “He was just scared! He was only trying to get away! They were blocking him and the poor lil’ guy panicked!” The unedited street-level footage of the ramming (the footage that starts before Fields’ car is hit by a bat) shows Fields accelerating toward the crowd with nobody chasing him or blocking his exit. And anyway, Fields willingly waded into a war zone dressed for battle; if he’s so easily rattled, he shouldn’t have done that to begin with.

Seriously—the white dindus of Charlottesville might as well join BLM; they have the responsibility-deflection thing down pat. And the “hair” thing, too. When I saw the mug shot of cat-fancying, mom’s-apartment-dwelling Fields, I was struck by my immediate revulsion at his adorable little “fashy” haircut. Oh, how proud he must have been when his stylist held up the mirror (remember—real white nationalists visit stylists, not barbers). I’ve always been suspicious of people who feel like they have to wear a “life uniform,” people who insist on trumpeting their identity through clothing or haircuts. That’s what lesbians and “black power” wackos do. “Life uniforms” are for people so empty on the inside, so devoid of individuality, that they have to paint on a crowd-approved identity because they have none of their own.

This is the fashy right path. This is the Richard Spencer path—to bring whites down to the level of black SJWs with their “ethnic pride” clothing and hairstyles. If the purpose of communism was to make everyone equally poor by pulling the wealthy and capable down to the level of the lazy and indigent, Spencer’s brand of “racial communism” is all about bringing whites down to the level of the most pathetic, identity-obsessed SJWs. And I get that there are not that many whites on the right who are following Spencer’s lead, but these rallies make it seem as though we’re all minions of David Duke. I can’t say it strongly enough—events like Unite the Right are nothing but a whole lotta bad road.

Look what Unite the Right has brought us. Confederate monuments are now being removed at an accelerated pace. Internet servers are indiscriminately dropping “racist” and “hate” sites left and right (well, just right, actually). Everything is worse off because of Charlottesville (perhaps the only exception being, the rally provided Trump with one of the finest “FU media” moments of his presidency). And way too few people seem to understand the ultimate irony in Unite the Right’s wake of destruction: The charge to cleanse the U.S. of Confederate symbols went into overdrive two years ago because a far-right, race-hating nutcase, Dylann Roof, slaughtered a bunch of black folks in Charleston. Unite the Right was a direct response to the campaign to remove Confederate symbols, a campaign spurred by Roof’s actions. And all the rally did was give a public stage to another race-hating, far-right nutcase who committed a crime that has now brought even worse repercussions than those that followed Roof’s murders.