Radar Love, The Elixir of Jealousy, &amp; Panic at the Country Club 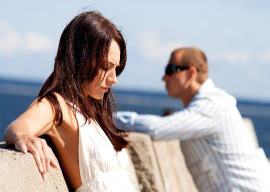 My boyfriend keeps saying he needs space, and as a consequence we fight a lot. I have become so worried that he is trying to—or is going to—break up with me that I keep asking him about what he is doing, where he is going, and who he is going with so he knows it is OK with me that he does other things. I am only trying to seem interested in and supportive of what he is doing, but he keeps getting angry. I feel it is all spinning out of control. Help! I don’t want to get dumped!

When a man says he needs space it does not mean he wants to be monitored from afar. It usually means he wants to go off the radar and feel free. He asks for space, so your response is to get scared and start over-monitoring. Wrong response! You should be letting him breathe, but instead you’re suffocating him. It probably feels to him like you are being a nag. Go on radio silence for a few days: no calling, texting, IMing, etc. If he finally calls you, go out and don’t ask him anything about what he has been doing; just have a good time. The next time he calls, tell him you are going out with friends and can’t do whatever he is proposing; say you wish you could, but you promised Betty, John, and Jane you would go out with them. You want to make him feel free. The best reset button in a relationship is disinterest.

“You should be letting him breathe, but instead you’re suffocating him.”

THE ELIXIR OF JEALOUSY

My husband of 10 years and I ran into an ex of mine by total random chance during our summer vacation. My ex asked us out to dinner, and I said yes before my husband had a chance to blink. My husband did not even know this man existed prior to our trip, because I never thought we would ever run into him, and I do not consider it “need-to-know” information. I never told my husband about two other exes, either, because he is the possessive type—he really would have loved to marry a virgin. My ex—who happens to be very attractive and very successful—told a funny story at dinner that made it very apparent that we had dated. Mind you, my husband has no problem telling me about all his girlfriends, but he won’t stop talking about my ex. It is starting to make me nervous that he won’t drop it. What can I do?