Rescuing America From Itself 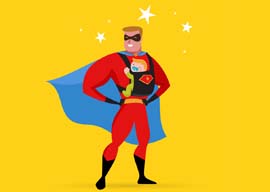 Last week, Kurdish authorities rescued 16-year-old Marlin Stivani Nivarlain at the behest of the Swedish government. Like something out of an SNL sketch, she had emigrated to northern Iraq because her boyfriend joined ISIS and she thought it would be fun. It wasn”t. “In the house, we didn”t have anything, no electricity, no water,” she told a Kurdistan news channel, “nothing.” I”m reminded of the complaining millennials who regretted joining ISIS after they realized their iPods don”t work there (also a comedy sketch). These aren”t just some esoteric examples of a tiny minority of young people who go astray. It’s what’s happening to the Western world. The assumption that we suck is forcing us to abandon everything and replace it with…shit.

“Move over and let us replace you” is a common mantra from young liberals. “Full communism,” “End capitalism,” and “End white supremacy” are also big. They”re interesting concepts at first glance until you realize they”re basing all this on the assumption that No. 2 is even in the same universe as No. 1. Marita Koch did the 400m in 47.6 seconds back in 1985. Sanye Richards is second-best, but she’s a full second behind Koch, which is a lifetime in sprinting. It’s unlikely Marita’s world record will ever be broken. The modern left is essentially a bunch of handicapped teenagers in wheelchairs barking at Koch to get the hell off the track”only way more dangerous.

“Letting the left run the show is like when I have “kids day” at home and let my children do whatever they want.”

In 2008, Italian performance artist Pippa Bacca decided we had the Middle East all wrong. Muslims aren”t maniacal rapists with no respect for human life. They”re angels sent from God to love us. To prove this she began hitchhiking from Italy to Turkey while wearing a wedding dress. Shortly after she arrived in Istanbul, Bacca was raped and strangled to death. Authorities found her naked corpse thrown in the dirt like a piece of garbage. “Trust is a very human factor,” Pippa’s sister said of the mission. “She believed that to understand people, you had to get to know them.” That’s precisely the problem. They don”t know them. All they know is an idea of them and they made up that idea in their own mind.

Before millennial activist Kayla Mueller was taken hostage and eventually bombed to death in a drone strike, she was a proud American feminist who wasn”t going to sit by and let injustice happen on her watch. “For as long as I live, I will not let this suffering be normal,” she told her friends and family as she set out to rescue Syria, “something we just accept.” Progressivism hasn”t empowered these women. It’s endangered their lives. It’s made them so unassailable, they proudly walk into war zones and demand everyone behave themselves. Is Merkel’s Germany the future we have to look forward to if we “move over”?

Jessica Buchanan thinks women need to understand their limits and is much more likely to insist charity begins at home before returning to Africa. This is because, after committing to help Somalia deal with their land-mine problem in 2011, she was kidnapped by pirates. They refused a ransom offer of $1.5M because they”re idiots and three months later, two dozen Navy SEALs had to parachute into the small town of Adow to rescue her. Shortly before the rescue, all Buchanan could think about was how stupid she was to jeopardize her own life at such a young age and how sad it would be if she never had kids. Turns out the patriarchy isn”t so horrible after all.

My very favorite example of this suicidal hubris happened in 2010 when Amanda Kijera traveled to Haiti to prove women’s organizations were lying about the horrific rape stats there. Like Pippa, she was promptly raped. What’s amazing about Kijera’s experience is it didn”t change her mind. Marlin begged her mother to get her back to Sweden. Mueller apologized profusely for subjecting her parents to such “suffering.” Jessica wouldn”t consider going back to Africa. But Kijera remained unwavering in her blame of the white male patriarchy. In a formal statement describing the experience, she said:

I pleaded with him to honor my commitment to Haiti, to him as a brother in the mutual struggle for an end to our common oppression, but to no avail. He didn”t care…. He didn”t care that I was a Malcolm X scholar…. Black men have every right to the anger they feel in response to their position in the global hierarchy, but their anger is misdirected…. Women are not the source of their oppression; oppressive policies and the as-yet unaddressed white patriarchy which still dominates the global stage are.