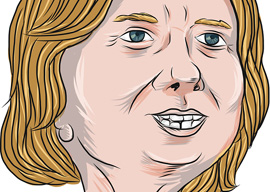 It has been a fun week for everybody (except Hillary Clinton) since my last column began by asking:

If Donald Trump were as bad as she says, shouldn”t Hillary drop out so a better candidate could beat him?

After noting her two coughing breakdowns on Labor Day, I inquired:

If Hillary announced she were withdrawing due to her health, who would replace her?

Since then, of course, Hillary decided to let us know what she thinks of roughly a quarter of American citizens:

How did I know this would happen?

It was, however, obvious from just looking at her that Hillary’s health for quite some time has been deteriorating faster than the normal aging process. I don”t know what her malady or maladies might be, but whatever they are, they certainly seem serious enough that I feel sorry for her.

By the way, that’s a major reason so few of her supporters will attend her rallies. Hillary can”t round up a healthy crowd to listen to her orate because advancing decrepitude is depressing, and people don”t want to be around it. (That’s one reason you want to have family rather than just friends. No matter how popular you were in your prime, nobody will want to be around you while you are dying; but one or two of your blood relatives might at least show up.)

“Whether Putin is murdering Hillary with ricin administered via a sharpened umbrella tip or with polonium in her tea, Dr. Omalu did not specify.”

It’s worth keeping in mind, however, that if at the 9/11 memorial there hadn”t been a lone bystander with a videophone who alertly recorded Hillary’s alarming breakdown, we would still be getting lectured by the respectable press about how concerns over the Democratic nominee’s health are “conspiracy theories.”

Heck, even now we”re being told that the long-mounting concern over Hillary’s physical future is proof of how vulnerable the body politic is to outlandish conspiracy theories. In The New York Times on Monday, for example, a Turkish academic harangued Americans on how their discussing Hillary’s symptoms shows they are becoming as prone as her fellow Turks to conspiracy theorizing.

Okay, but the reason the Establishment media have been so vehemently denouncing all the conspiracy theories about Hillary being in declining health is because Hillary is in declining health. The mainstream media didn”t want you to notice that Hillary is falling apart and therefore abstain or vote for Trump.

Indeed, there have been so many denunciations in the press of the public engaging in conspiracy theorizing about Hillary’s health lately that you might imagine there is a conspiracy among professional journalists.

Whether or not the punditry has been explicitly conspiring to cover up Hillary’s physical troubles or merely implicitly coordinating amongst themselves could be an interesting question in media anthropology.

My guess is that 2010-era JournoList-style secrecy is hardly necessary anymore. Twitter shows in real time how the hivemind operates, with pundits trying out hot takes for their peers and being shamed if they get off message.

Meanwhile, now that it’s admitted that Hillary is ill, The Boston Globe and The Washington Post are promoting the conspiracy theory of Dr. Bennet Omalu, who was played by Will Smith in last year’s movie Concussion, that Mrs. Clinton might be the victim of some kind of sinister poisoning. He notes:

I do not trust Mr. Putin and Mr. Trump. With those two all things are possible.

Whether Putin is murdering Hillary with ricin administered via a sharpened umbrella tip or with polonium in her tea, Dr. Omalu did not specify.

Perhaps Trump is dipping Bill Clinton’s range balls at the Trump National Golf Club into some kind of KGB neurotoxin, which would explain the ex-president’s increasing cadaverousness. Even The Onion, which is now owned by Univision, which is owned by Haim Saban, who more or less owns Hillary, recently dared to joke:

There are a couple of connections between Hillary’s corporal decline and her decision to denounce scores of millions of Americans as deplorable and irredeemable.

First, Hillary, formerly a fairly smooth Secretary of State before a series of unfortunate events wrecked her health, seems to be coming down with a case of Elderly Tourette’s Syndrome. The older you get, the harder it is to keep from blurting out exactly what you think at the moment.

The dapper, well-programmed Hillary of 2008 wouldn”t have ejaculated quite so blatantly at her LGBT fund-raiser on Friday how much she hates a huge chunk of the American people. But the decaying Hillary of 2016 lacks the self-control to keep her emotions under check.