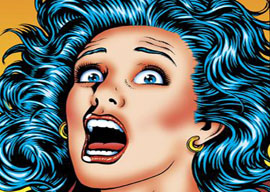 I am the other woman. I have been seeing this older married man for about three months. I really like him and he says he really likes me, but he never talks about his wife. I think their relationship is doomed and I am falling in love. Should I tell him how I feel and ask/tell him to leave his wife, or do you think it is still too soon and I will scare him off?

“The Other Woman in Oslo

Dear Other Woman in Oslo,

Why do you think it is OK to plan your love life with a married man as if his wife were simply a casual dinner date he can call and cancel so he can go out with you instead? The fact that he does not talk about his wife does not mean he does not love her; it only proves that he still respects her enough not to discuss her, their life, or their problems with you. Or have you forgotten that you”re the other woman?

If he has children, leave him now! Quit fantasizing about wedding dresses and run away! You are the other woman; congratulations that you are cute enough to distract an older married man for three months. It may have been nice, but do you really want to ruin a family?

“Quit fantasizing about wedding dresses and run away!”

If he does not have any children, then yes, the playing field is more even. At that point, it is a game between adults”all of whom knew and accepted the risks”in which only adults can get hurt. However, why would you want a man who is foolish enough to start up a full-fledged affair? Do you really think leaving his wife and marrying you would cure him of such antics? Look for men who know how to have casual affairs without destroying everything around them.

I hate my daughter’s husband, and I tell her all the time; that is not the problem, because I am very open with her about everything. The problem is he is going to ruin her life. He is already ruining her life in my opinion and one day she will regret it, but by then it will be too late; she will be too old to find a suitable second husband, because she is already 35. She will not listen to me; what can I do?

I am surprised your daughter is still speaking to you. It is bad enough that you openly and frequently tell her that you dislike her husband even a little bit, but here you are telling her that you outright hate him. Of course she is not going to listen to you. Do you really think she is going do a pirouette one day and say, “Oh, mommy you are right and I am wrong, my husband is a bad, bad man and I am going to leave him” just because you say so? Maybe that works when your child is ten and you are talking about brushing your teeth or hair before leaving the house, but it is definitely not going to happen with a 35-year-old married woman. You should know this; you are a woman. Would you have left your husband because your mother told you to?

Obviously she does not think her husband is ruining her life, or she would have left already or be planning to leave in the near future. You have to back away from the issue and let her make her own mistakes. When she was young, did you forbid her from playing in the mud for fear of germs or swimming in the ocean for fear of drowning? Stand back, watch, cheer her on, and hope she does not crack her head open on the pavement. If she does, don”t stand over her bleeding body and say, “I told you so, you never listen, now it is too late to find any help, you may as well curl up in a ball and bleed to death””help her up! Seriously, what is wrong with you? I think I hate you more than you hate your son-in-law!