Sympathy for The Donald 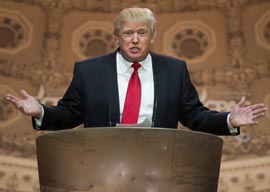 Once upon a time a candidate emerged who said what no one dared to say about the greatest threat facing his countrymen: immigration. He was incendiary, shocking, and hated by the ruling class for what he had to say. He made his point in a style that was uniquely his own. Despite his past he became a working-class hero”he rose in the polls and in public esteem”and though he never ascended to his nation’s commanding heights, he forced others to follow his lead. He won the argument even if he didn”t necessarily win the politics.

I”m referring to the great British MP Enoch Powell”UKIP before there was a UKIP“but I could just as easily be talking about Donald Trump, who has become the immigration restrictionist’s indispensable man. (The movement’s indispensable woman”the Lady Ann Coulter”continues her reign.)

Trump wasted no time in his announcement speech. “They are bringing drugs. They are bringing crime. They”re rapists,” Mr. Trump said about Mexican immigrants, adding, “Some, I assume, are good people.” Enoch Powell had his famous “Rivers of Blood” speech; Trump has his “Who is doing the raping?” questioning. And just like that he got the government of Mexico and its allies (the American media) to freak out. It’s gotten so bad that The New York Times (owned by Mexican monopolist and world’s richest man Carlos Slim) says it might change U.S.”Latin American relations. ¡Ay, caramba!

“Who cares about being president when you can decide the day’s news? Trump understands intuitively that he who controls the news cycle controls the politics.”

But for all the tut-tutting about Donald Trump, he gets results. Mr. Trump has often used his “big Twitter” to force the conversation in ways he wants it to go. He endeared himself to this writer when he forced Barack Obama to release his Photoshopped certificate of live birth the very same week that SEAL Team Six reportedly killed Osama bin Laden”an obvious example of misdirection. Why didn”t Obama release his certificate of live birth before bin Laden was dumped into the sea? Surely he had it before that little raid in Abottabad?

If you”re foolish enough to believe that Barack Obama is the son of a Kenyan, you”re in diminishing company these days. Not even Obama’s own alleged half brother Malik believes they are related. The probable father is Frank Marshall Davis, who boasted that he had impregnated three different women (including his wife) and who, despite being prominently mentioned throughout the 1995 version of Dreams From My Father, was excised from the 2004 audio version. To ask Obama who-is-your-daddy questions is to be branded a birther, a term tailor-made for dismissal. And yet Trump refused to be unpersoned. He didn”t go away. Mr. Trump didn”t have to pick that fight but he did, and he never apologized for it. Of course, I would have asked why Obama has never done a genetic test with his friend (and pop celebrity geneticist) Henry Louis Gates Jr., but I”m a nerd, not a billionaire (yet). Having Obama’s DNA would answer the question definitely, which is precisely why no one has asked for it. Maybe we”ll find out in his post-presidency.

Here is the beauty: Trump can”t really be boycotted because he can”t really be publicly shamed. He can violate whatever taboo the cognoscenti have decided upon last week because he can”t really be made to pay. Sure, he might lose a deal here or there, but it’s nothing compared with the publicity he’s getting. No one would dare call Trump a tired old man, even though he is two years older than Hillary. He seems alive. Chris Christie’s slogan is “Telling It Like It Is,” but that space is already occupied. Trump calls out his competitors as the “losers” they are.

Trump can”t be censored like yours truly from Twitter. Indeed he may well be the only man in the presidential field who is free to say what he fancies to his 3 million Twitter followers and countless millions more. And yes, he’s”to borrow a phrase from another great troll, Charlie Sheen”winning. Whether it’s drawing attention to his many successes in business or the beauties he parades about or the hotel he’s coincidentally building on Pennsylvania Avenue, Trump is playing by his own set of rules. The very same reality-distortion field that made Jobs rich makes Trump impervious to pain.

Who cares about being president when you can decide the day’s news? Trump understands intuitively that he who controls the news cycle controls the politics. So go ahead and condemn him. All you do in the tweeting world is elevate him. Power perceived is power achieved. And, in our page-views click-baiting Ryan Holiday culture, power is the ability to command attention. It’s the ability to affect the issues we talk about. To trend on Twitter is to set the agenda.