The Cults That Are Killing Us 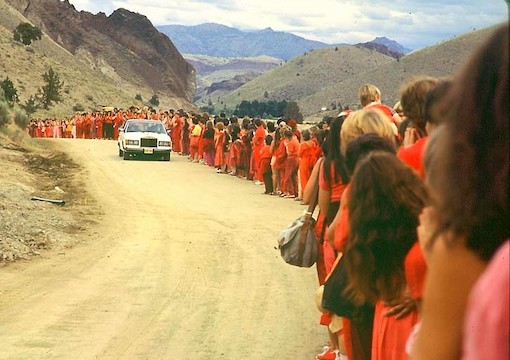 I’ve devoted a lot of text to George Soros, the one-man army behind the U.S.’s catastrophic rise in violent crime, the obsessed, inflexible ideologue who personally funds the “progressive prosecution” and decarceration movements to the tune of billions annually ($18 billion in 2017 alone).

I’ve speculated about his motives here.

But what about his followers, his minions, the people trained and funded by Soros’ foundation? Soros has unique motives based on his personal life experiences. But how does he manage to attract thousands of fanatical loyalists—of all races—who don’t share those experiences?

“Every generation births these clods, and all it takes is one cunning human to make use of them.”

Let’s break that answer into sections.

In other words, Biden voters.

Sorry, that sounded way too Sean Hannity. But it’s true that both cults were made up of core Democrat demographics.

The Jonestown blacks were suicidal, killing themselves and their children. The Rajneesh whites waged war on non-cultist whites who lived nearby, launching the first-ever mass bioterrorism attack in U.S. history.

Both cults had several things in common: The members were searching for a utopia; they spoke their own bizarre jargon and held beliefs that alienated them from the mainstream. That “the normies” didn’t speak their language made the cultists hostile and paranoid. It never occurred to them to think, “Wait, maybe we’re the nutcases.”

The Sniffing Teachers
“Multiple Chemical Sensitivity” (MCS) is a phony disease, a psychosomatic phantasm, the belief that the reason you “don’t feel well” is because you’re allergic to the modern world. MCS “sufferers” refuse to be around painted walls, cleaning products, and people who use soap or shampoo.

Every study ever undertaken has proven MCS to be nothing more than an anxiety disorder.

MCS “occurs” almost entirely in women. But here’s an interesting wrinkle: It’s also most prevalent among teachers. You can find individual cases (Connecticut, New Mexico, California, Washington, Vancouver, Nova Scotia) of “MCS teachers” raising hell at their school (obsessively sniffing students to make sure they didn’t use soap or shampoo, forcing districts to install fancy ventilation systems), and the proponents of MCS pseudoscience have written extensively about how teachers are the main “afflicted” group.

The largest law firm representing people with MCS brags on its website that teachers are among its main clients, and the Illinois medical clinic that specializes in “treating” MCS straight-out admits that most of its patients are teachers. Writing for the Duquette Functional Medical Clinic, MCS expert Dr. Ronald Grisanti observed: “Some physicians have coined the term ‘Toxic Teacher Syndrome’ due to the numbers of teachers suffering with the same symptoms.”

Grisanti states that every year “thousands of teachers” (mainly women) are afflicted with the illness. The Duquette paper, written in 2015 when Covid was just a glimmer in some Chinese bat’s eye, details dozens of efforts by MCS teachers across North America to have new ventilation systems installed to protect them from “toxic” students.

Before Covid, “thousands” of teachers were already claiming that their students were making them ill, and demanding special “safety precautions” before they’d return to the classroom.

Juliet
I have some personal experience here. In 1991, I dated a woman who would go on to become a high-profile MCS poster girl. I’ll call her “Juliet.” She didn’t discover she had MCS until after we stopped dating (indeed, she wasn’t “diagnosed” until the 1995 indie film Safe came out, which introduced hypochondriacs to the ailment).

Juliet was what I call a “personal utopian.” Political utopians believe in governments or ideologies that can ostensibly bring about a perfect world. But personal utopians internalize that mania. They don’t accept that any human should ever have a “bad” day (sadness, sluggishness, irritability). They don’t believe it’s natural. Having a bad day means there’s something wrong with you, something that must be “cured.”

These are the people whose belief in “climate change” rests on the notion that the weather should be perfect every day. An abnormally cold week, or an abnormally hot one, means something’s wrong. It can’t possibly be natural.

It should be noted that two separate surveys found that the majority of Rajneesh women had spent years in therapy.

Juliet tried everything—yoga, meditation, crystals, mysticism, “holistic healing”—to rid her of imperfect days. Finally she realized it was MCS. She sued her employer for the right to work from home.

So Let’s Piece It Together
Certain unpleasantries always exist in our world, whether or not they make their existence known to us. The kind of people who joined Jonestown and Rajneeshpuram, and the teachers who saw their students as deadly, didn’t just arrive for that moment and disappear from the gene pool when they vanished from the headlines. Personal utopians searching for their own nirvana, for an end to “feeling bad,” are forever out there, lurking. Every generation births these clods, and all it takes is one cunning human to make use of them.

In 2020 the U.S. was hit by a perfect storm when Covid and George Floyd allowed many “cunning humans” to marshal the loons. The followers of the Covid cult, and the Soros cult, are the prototypical personal utopians. Covid cultists seek a world with “zero Covid,” an earth from which the bug has been banished. We cannot “return to normal” until Covid is gone. The reassurances we got in the early months about just trying to control the spread, or the deaths, or even the cases, were insincere PR to placate the sane; the social engineers trying to use Covid to remake society knew that their base was comprised of cultists who could be convinced that you can—and must—“eradicate” a highly contagious flu-like disease, as in, make it extinct instead of gradually less harmful (only two diseases have ever been considered “eradicated”—smallpox and bovine rinderpest. Diseases like Covid never “vanish”; they just mutate and become less deadly as humans evolve to handle them).

As we were pacified by talk of “spread” and “deaths,” the cultists with their “fear of feeling bad” were empowered to demand complete viral extirpation.

And the fact that teachers have played such a major role in Covid policy has meant that “sniffing teachers,” once a localized annoyance, now control national education policy, forcing their mania on everyone’s kids.

Meanwhile, following George Floyd, Soros marshaled his cultists—personal utopians united by a belief that “progressive prosecution” can bring about a complete end to human violence. As Harlem councilwoman and Soros minion Kristin Jordan recently tweeted, “abolition [of police] is an end to violence altogether.”

Soros conditioning contains concepts no less bizarre than what you’d have found in Rajneesh literature. Last year, in a widely shared op-ed, Soros Foundation “Justice Fellow” Mariame Kaba described one of the bedrock concepts of the cult: Human violence should not exist; it’s unnatural. Presently, we have police, and presently, there is human violence. Therefore, police cause violence, and if you get rid of police—not “reform” but remove—we’ll reach a utopia in which no human is ever again violent to another (that’s her literal claim).

As I said, a perfect storm. In 2020, we gave over a shocking amount of control over our daily lives to cultists. And it’s damn near destroying the nation, worse than anything since the Civil War.

Cult leaders don’t create their members. They look for people who already have a mind susceptible to cultism, and they give them focus, they channel them. Sniffing teachers would hardly be a menace without the obscene power granted them by high-level Democrats. Activists running for DA just to dismantle the office is not organic; it only happens because Soros trains the cultists and funds their campaigns (while Soros minions in the press do their part by discouraging people from fighting back, because it’s “racist”).

Remember my point about how these types of would-be cultists exist in every generation. The role of a good cult leader is to seek them out. A guy like Soros simply endows his foundation, gets it into the schools where young people are offered training and scholarships, and picks the best potential minions who show up to apply.

If we were talking about Hare Krishnas, Soros wouldn’t be the guy at the airport passing out fliers. He’d be the guy building the temples that attract the “seekers.”

If you’re a sane person and you find it difficult to understand how the Covid anti-normalcy loons and the Soros police-defunding loons can do what they do, how they don’t seem to care about the horrific effects on children of daily masking, how they don’t seem to care about the violent crime surge that’s killing so many innocent people, remember, these folks are chasing a utopia (zero Covid, the end of violence). All collateral damage is acceptable. The Jonestowners murdered a U.S. congressman and their own children, and the Rajneeshees tried to kill an entire town. Appeals to their humanity won’t work. They surrendered that when they joined.

So to wrap up, Soros’ motivations are uniquely his. But he understands that there are thousands of potential Jonestowners and Rajneeshees born every year. These people are fair game for the first cult leader who recruits them. That’s what Soros does, and he uses their weak minds to his advantage.

Reality Fights Back?
Now, I’m fond of saying “reality always wins” (heck, that would’ve been a snappy title for my January 2019 column, where I made that exact point verbatim and repeatedly). In the end, all cultists run up against reality. They never find their utopia. They become disillusioned and fade away, or they leave in a blaze of glory (Jonestown, Waco), or they disband because authorities cut the head off the snake (Bhagwan Rajneesh was eventually deported and his top deputies were arrested for the germ-warfare attack).

The problem is, even when reality does beat a cultist, there will be plenty more to fill that vacuum. With Democrats facing a difficult midterm, we’re seeing them gradually reduce the power of the Covid and Soros cultists in their midst.

But these kinds of mush-minded, gullible “searchers” are as normal in the human world as disease and violence, two things we’re never going to eradicate, any more than we’ll eradicate the lunatics who’ve brought America so much misery with their simple-minded, destructive quests for utopia.