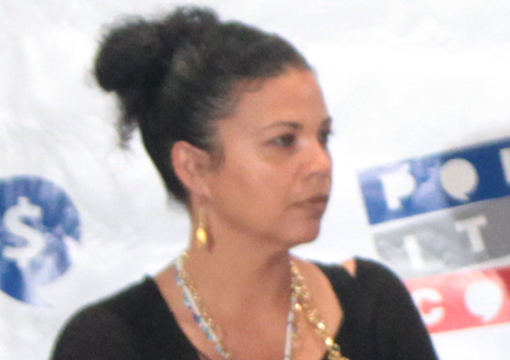 Can America survive blacks and Jews?

Thanks for reading, folks! See you next time.

Uh…I seem to have come in a little short this week.

I never speak much about my family, mainly for privacy reasons. I talk a lot about my Elvis-killing biological father, Dr. Leon Cole, because I never knew him and he’s been dead since 1977. But generally I’m fairly cagey regarding the family I actually knew. So without being too specific, I’ll say that on my maternal grandmother’s side, I come from a long line of politically radical Ashkenazi Jews. Marxist-Leninist-atheist “revolutionaries” who were quite the hell-raisers during WWI and WWII…Jews fortunate to live in London and NYC during the 1930s because there was a courtesy suite reserved for them at Dachau.

But those relatives were unimportant to me growing up. I barely knew them; they were on the East Coast, whereas my mom and I were in L.A. And my mom, raised primarily by a Sephardic (Spanish Jewish) father, a tradesman (furniture maker) who saw politics as what a lazy man does to avoid an honest day’s work, reared me in a household devoid of ideology. So growing up, I was not in any way influenced by the radicalism in my family tree.

Yet by age 22, I’d become an internationally reviled politically radical Jew. Indeed, according to the ADL, I was the most radical (in a bad way) Jew alive.

How the fuck did that happen? I didn’t plan it. I wasn’t consciously following in anyone’s footsteps; I’d never been indoctrinated as a child. As I said, the radicals in the family were far-off ghosts to me. Was I fated, or perhaps a better word is prone, to this outcome? Was I as predestined for my lot as DeMarquis in Detroit is guaranteed to have three felonies by age 20?

I’m not going to argue nature vs. nurture; that’s Steve Sailer’s beat. But I know what I’ve seen. And the “revolutionary predilection” so prevalent in Ashkenazi Jews is damn hard to cleanse from a bloodline.

Here in L.A., our local Rosa Luxemburg is named Melina Abdullah. She leads our hometown BLM terror cell. Her real name is Melina Rachel Reimann; her daddy is “self-proclaimed Trotskyist” John Reimann and her grandpappy was Hans Steinicke (a.k.a. Günter Reimann), a German-Jewish communist agitator implicated in the Reichstag fire who fled to NYC and almost assuredly knew one of my great-uncles.

Melina, a tenured professor in the Pan-African Studies department at Cal State L.A. (because of course she is), is biracial—her paternal Trotsky had the hotsky for some urban contemporary poon—and last week she tried to whip up a mini-riot outside a Trader Joe’s in Silver Lake where, in 2018, a 28-year-old black thug who’d just shot his 76-year-old grandmother and 17-year-old girlfriend was cornered by LAPD after a car chase. Two female cops (one of whom was Asian) returned fire when the thug shot at them, and a police bullet accidentally struck the store’s assistant manager, a young Mexican woman.

So there was Melina Oyveyizmir Ongobongo, chanting and davening and trying to raise hell, but it didn’t take. Wrong terrain. Not enough blacks to create violence, too many feminists uncomfortable with drawing attention to an accidental death caused by female officers, and too many Mexicans too busy trimming hedges and installing drywall to take time off to burn down the supermarket where their cousin Gustavo works as a boxboy (trabajo bueno).

What resulted, as the video shows, was a pathetic “sit-in” by some miserable Covid-masked whites and assorted “allies.”

“You disappoint me, granddaughter; your Reichstag still stands.”

To be fair, Melina is an extreme case study in inherited Jewish radicalism (from Nazi-era communist revolutionary to BLM terrorist), as am I (even though my “radicalism” was atypically non-leftist). But still, it‘s kind of a joke on the far right, but like all good jokes, it‘s rooted in truth: “every damn time.” Every time there‘s some new anti-Western, antiwhite movement, policy, “theory,” or artistic endeavor, there are Jews…somewhere in the chain, usually at the top.

“Jews need the struggle, and if they’re no longer the ones struggling, they need a proxy who is.”

There’s a core of the Jewish American community that will never stop being “revolutionary.” They may do it from a street corner with a bullhorn, or from the safety of a tenured professorship, or from a Hollywood studio, or from the comfort of their own home writing checks to the DNC or a Soros PAC, but it’s a trait that’s continually passed down, generation to generation. They may not even know what they’re “revolting” against or why; but consciously understood or not, the target’s always going to be stability, “the system,” as best represented by white Western civilization.

You can argue genes, you can argue culture. But the Jewish predilection for “revolution” seems as predictable as the Ashkenazi high IQ.

It’s part of what Dominic Cummings calls “Ashkenazi Jewish specialness.” It’s something that Scott Alexander Siskind puzzles over, the “beliefs and norms” he seems to have inherited even though there were no Jewish “tiger moms” in his family drumming it into him. “I was raised by Ashkenazi Jews and…the cultural payload I received as a child was totally normal, just a completely average American worldview.” Like me, he wasn’t pushed into any of this, or even slightly nudged. Yet he became, in his own unique way, a political and ideological “revolutionary thinker.” A radical. And like me, he just sorta landed there. It just kinda happened. But when enough things “just kinda happen,” it’s legit to wonder if it’s mere chance or something more.

See, that anti-West “elephant” I described in last week’s column, the self-sustaining creature that lives on past its creator…well, Jews are great at giving life to such things. We’re a maddeningly hit-and-miss people; one day, two Jews at opposite ends of the world might wake up and say, “I’m gonna cure polio!” And they will. On another day, a Jew might say, “I’m gonna create communism.”

Medical advances and Marxism are both things that live on past their creators.

My own biological father might’ve been Elvis’ drug doctor (he actually went to prison for it), but he also perfected anti-rejection medications for organ transplants.

The good and the bad. That’s Jews for ya.

Unfortunately, the bad is very bad. Still, that revolutionary urge inherent in “not all but enough” Jews would be less destructive if American Jews didn’t have a vessel to carry the poison. And that vessel is blacks. Jews are too well-off to claim that they need revolution to liberate themselves. Yes, Jewish political activists are prime advocates of open borders, but let’s be honest—the Chinese don’t need Jewish help; they have the intellectual goods and money and clannishness and devious minds to succeed on their own. And Mexicans? Jews may import them like mad, but so far it’s been hard for the Jewish leftist demagogues to figure out what to do with them once they’re here (this is the “beaners remorse” I wrote about in a previous column).

When I speak of blacks as “vessels” for Jewish revolutionary mischief, what I mean is that Jews, who always couch their revolutionary urges in the rhetoric of do-goodism, need a group they can claim to be fighting for—a helpless, hapless group, whose plight will never, can never, improve, thus giving permanent revolutionaries the permanent losers through whom to wage their permanent war.

Jews are not placated by their own success. If only they were mollified by material success. But no, there’s an impulse not satisfied by mere prosperity. They need the struggle, and if they’re no longer the ones struggling, they need a proxy who is.

That core of blacks will always give that core of Jews the conduit for their revolutionary compulsions. The worst of the worst of the present-day anti-West Jews, like Soros, don’t give a damn if a Chinaman is imprisoned in a U.S. jail. Or an Indian. Or even, frankly, a bean. Because those groups, even with all the immigration pushed for by leftist Jews, would fundamentally change America but not sink it as an entity. Don’t get me wrong—they’d change it in a bad way. An Asianized America (an America with a British Columbia-level Asian percentage) would no longer be America. But it would function. A Hispanicized America would no longer be America. But it would function (poorly). But a black America would fail on its own because that particular group always needs someone else to do the math and grow the food and create the jobs and treat the sick.

Of course, non-Hispanic blacks are a stagnant 12.8% of the population. So there will never be a “black America.” But that’s where Jews come in. One can artificially create a “black America” (i.e., an America that will fail) by making that 12.8% the standard. Every job, every entrance exam, every skill, must be dumbed down so that the 12.8% can do it. The 12.8% get free passes from arrest and incarceration. All movies and TV shows must involve the 12.8%. The 12.8% get veto power over everything. All human endeavors must revolve around the 12.8%, and nothing can occur that displeases the 12.8%.

Blacks have becomes America’s Poochie. “Whenever Poochie’s not on screen, all the other characters should be asking, ‘Where’s Poochie?’” Where there are blacks, their opinion is what matters. Where there are no blacks, all actions must be based upon “What would blacks think?”

The 12.8% rule not by superior numbers or skills, but because the permanent revolutionary class has birthed its most destructive proxy war yet.

Black is the failed state we can’t pull out of. The Afghanistan within our borders, as much a part of the U.S. by birthright as any white person. And there’s the rub. The smart solution is to salvage the best of the black community and starve the rest via imprisonment of the inveterate criminals, no welfare for the work-shy and baby-factories, and geographic isolation.

The Jewish “revolutionary” solution is the exact opposite of that: decarceration, welfare, and dispersal.

It’s a symbiotic relationship; blacks who could never achieve that level of dominance, of importance, on their own, and Jews who channel their revolutionary desires through a hopeless people who give them permanent surrogates. The two groups don’t have to like each other (and they don’t), but they both profit from the relationship.

And neither core is going to change its nature, at least not in my lifetime, or yours.

To quote Shakespeare, “This is our doom.”

Blacks and Jews, working together, even if unknowingly, even with both groups driven not by calculated malevolence but by instinct and character.

Partners till the end.