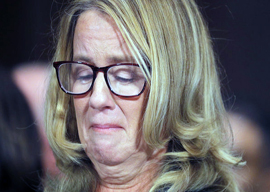 Before the sexual revolution, there were certain mores that the sexes were expected to follow in regard to sex and romance. Of these, not having sex before marriage and children out of wedlock were by far the most important. Although not everyone ever followed it, the loss of this bourgeois script has seen collective organic wisdom superseded by personal autonomy. Having unleashed rampant chaos in the culture, that change now shows its worst effects in the debased family and in the weird puritanism that has emerged in response to the anything-goes attitude toward sex. Such puritanism seems quite ironic, to be sure, and yet it merely signifies the need for more social order and moral cohesion amid unfettered eros.

With this context in mind, we can better understand the ongoing Brett Kavanaugh controversy. On Sunday, The New Yorker published an article by Jane Meyer and Ronan Farrow that led the farce to take on more ridiculous proportions. Perhaps the most influential journalist in the #MeToo movement, Farrow is an ambitious man and hardly strikes one as an unbiased reporter. He is the son of actress Mia Farrow and director Woody Allen (from whom he is estranged), and the gay man is perhaps motivated in part by his own rather unhappy family romance, to borrow an apt term from Sigmund Freud.

The woman at the center of the story, Deborah Ramirez, who is 53, attended Yale with Kavanaugh, where she studied sociology and psychology. Later, she spent years working for an organization that supports victims of domestic violence. ‘The New Yorker’ contacted Ramirez after learning of her possible involvement in an incident involving Kavanaugh. The allegation was conveyed to Democratic senators by a civil-rights lawyer. For Ramirez, the sudden attention has been unwelcome, and prompted difficult choices. She was at first hesitant to speak publicly, partly because her memories contained gaps because she had been drinking at the time of the alleged incident. In her initial conversations with ‘The New Yorker,’ she was reluctant to characterize Kavanaugh’s role in the alleged incident with certainty. After six days of carefully assessing her memories and consulting with her attorney, Ramirez said that she felt confident enough of her recollections to say that she remembers Kavanaugh had exposed himself at a drunken dormitory party, thrust his penis in her face, and caused her to touch it without her consent as she pushed him away. Ramirez is now calling for the F.B.I. to investigate Kavanaugh’s role in the incident. “I would think an F.B.I. investigation would be warranted,” she said.

What Meyer and Farrow don’t tell us is that before The New Yorker spoke with Ramirez, The New York Times had already heard her story, but since they couldn’t find anyone to substantiate it, despite doing dozens of interviews, the paper chose not to “give a voice to her silence,” as cant peddlers would put it.

“The only thing that’s always reliable in morality is the will to punish.”

“Without her consent” is a significant and revealing phrase. For today we are supposed to believe that any heterosexual activity that is not preceded by a woman’s verbal consent is wrong by definition. But as I showed in my last column, this mad simplification is contrary to the essential ambiguity of sex and romance. Besides, by this standard most men in history must be deemed sexual assaulters.

Like Christine Ford, Deborah Ramirez has a background in social science, a field that breeds pathology and resentment. One is reminded of Karl Kraus’ quip about psychoanalysis: that it is itself the illness which it purports to cure.

Ramirez also “spent years working for an organization that supports victims of domestic violence.” It’s a safe bet that the woman is to the left of Brett Kavanaugh and the president who nominated him to the Supreme Court.

It’s also a safe bet that, like Ford, Ramirez is either a liar or deluded regarding the events that Kavanaugh and several others present have contested. By her own account, Ramirez spent some time asking friends and classmates whether they remembered the incident. None did. Had she told anyone about it? Apparently not.

Still, “after six days of carefully assessing her memories and consulting with her attorney,” Ramirez has a different story. To be sure, like the perception that it reflects, human memory is notoriously biased and unreliable. When it comes to the mind, nothing is more common than believing things because they suit one’s interests, selectively interpreting both the past and the present to that egoistic end.

Then too, how often does it happen that a woman, accurately believing she was used by a man, uses the understandable resentment thus aroused to transform the memory of what happened into a sexual assault. Here women’s greater conformity, greater neuroticism, and characteristic hysteria are quite baleful. In many cases, all a woman has to do is learn of other women’s “stories”—or speak to her girlfriends, or mother, or sister, or the invariably feminist university bureaucrat—and suddenly she believes that she too was raped or sexually harassed.

This state of mind is typically accompanied by a will to punish, whose application is not sure to be accurate. Indeed, people tend to care more about making someone—anyone—suffer than they do about actual justice. Accordingly, we have seen precisely this blind will to punish in Senators Feinstein, Gillibrand, Harris, and Hirono, and in countless women journalists.

The most telling sign that Ramirez is not credible is the phrase “consulting with her attorney.” It was this that made Ramirez confident in her recollections. What might motivate an attorney to inspire the woman’s confidence? To start, how about $800 or more an hour, while knowing, with an eye to Christine Ford’s GoFundMe account, that the huge legal fees would probably be funded by the contributions of a great many vengeful pseudo-puritans?

What might motivate women like Ford and Ramirez to “come forward”? How about the power that comes with the incalculable moral capital one obtains from doing so? How about sympathy, attention, fame, speaking gigs on television and elsewhere, book deals, and more? Notice that, as if on cue, Anita Hill has emerged to offer her two cents on “How to Get the Kavanaugh Hearings Right.”

I represent a woman with credible information regarding Judge Kavanaugh and Mark Judge. We will be demanding the opportunity to present testimony to the committee and will likewise be demanding that Judge and others be subpoenaed to testify. The nomination must be withdrawn.

This news of a third accuser came just a few minutes before the New Yorker article was published, and for all we know the timing was a coordinated effort.

A committed anti-Trumper, who may run for president in 2020, Avenatti is Stormy Daniels’ attorney. In July he used a video shot by a former client to stir up outrage and paranoia concerning the Trump administration’s efforts to enforce the southern border. In short, Avenatti is no less prejudiced than Christine Ford’s attorney Debra Katz, whose many conflicts of interest I noted in my last column.

Rather brazenly, as if he didn’t care whether anyone divines his underlying motive, Avenatti declares that “the nomination must be withdrawn.” Well, at least you don’t have to pretend to be impartial, counselor! It can be so tiresome, legal ethics.

Technology has become a uniquely effective tool of manipulation, and Mike Davis, chief counsel of nominations at the Senate Judiciary Committee, jumped at Avenatti’s bait. “Please advise of this information immediately,” said Davis to Avenatti, “so that Senate investigators may promptly begin an inquiry.”

In an email Avenatti replied:

We are aware of significant evidence of multiple house parties in the Washington, D.C. area during the early 1980s, during which Brett Kavanaugh, Mark Judge and others would participate in the targeting of women with alcohol/drugs to allow a “train” of men to subsequently gang rape them.

Notice the predictable academese here, the rotted language of victimology. The women were “targeted,” just as voter ID laws supposedly “target” blacks since, as it happens, a disproportionate number of them don’t have IDs. Needless to say, men are forever trying to get women drunk in order to make them amenable (or more amenable) to the prospect of sex. But such seduction is a very different thing from Avenatti’s cynical portrait: Kavanaugh and his big bad frat buddies getting the poor young innocent women high and drunk so as to “subsequently gang rape them”!

On Wednesday, Avenatti revealed the identity of the third accuser, his client Julie Swetnick. She basically repeated what her attorney had said on Sunday, although—crucially—she has no “evidence” for her claims. As if this were a Lifetime movie, Swetnick tells us that Kavanaugh used to drink excessively and was a “mean drunk.” Have some more fudge brownies, little sister! My ex was a jerk too!

Avenatti knows that, in a criminal case, none of this would fly. He also knows that, in the current climate, such cheap and shameless hysteria may well keep Brett Kavanaugh from being confirmed to the Supreme Court.

Ramirez “would be willing to testify” about her accusation. Meanwhile, Ford claims that four people—her husband and three friends, who else?—can “corroborate” her story. Yet their testifying that Ford told them such and such would be nothing but hearsay: It may or may not be true and, in any event, would leave unshown and unsubstantiated what actually happened. Of course, that may not matter since this mess is being played out in a kangaroo court.

In that respect, Brett Kavanaugh, whether he is guilty or innocent, is like any number of other men being punished by a culture that, in the absence of traditional mores and constraints, no longer knows how to navigate the inherently difficult, ambiguous, and unpredictable sexual domain. The journalism on the man’s fraternity days has been appalling in its mendacity and hypocrisy. Can no one be young, wild, and foolish anymore? Do Kavanaugh’s critics hold themselves and their friends to the impossible standard to which they have subjected him, a man, never so rare, who says he was a virgin until well after high school?

Nobody believes—or at least lives as if—he is defined by a single act, least of all one from the distant past. Nevertheless, people don’t hesitate to hold others to the same impossible standard from which they exempt themselves. The reason, as I show in my essay “The Nature of Hypocrisy,” is that people in general are hypocrites, and their morality is shallow and badly understood: so much weakness, in the main; so much blind following of their group.

And the only thing that’s always reliable in morality is the will to punish. It’s undoubtedly this, at least in part, that leads all these women to “come forward” decades after the fact. The many women who are now grandstanding about being “survivors” are, I think, motivated by their own resentments and issues, and could not be more indifferent to Ford and the rest. But mankind has to tolerate one another, so everyone takes care to appear good to his fellow fraud.

According to those who have known him well, Brett Kavanaugh has lived an exemplary life. He is surely a better man than most of us. And yet, consider his trials and tribulations. It is enough to make one question what it is really worth to live a good life in this world.