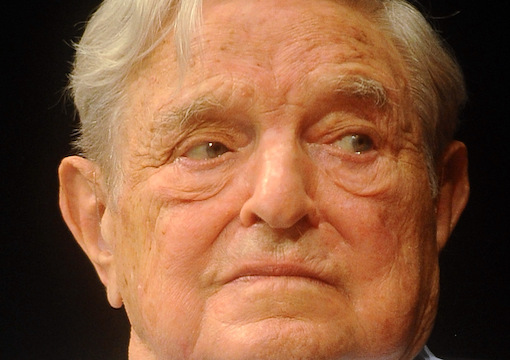 At 92 years old, George Soros is the last human experientially connected to the Holocaust who’s still actively taking lives. Sure, there are a few elderly ex-Nazis being dragged before German courts, but they’re insignificant (secretaries, bookkeepers) and their murderous exploits, if any, ended with the war.

Soros, a Jew who survived the Holocaust by posing as a gentile, kills people daily. How many? I think it’s safe to say that at least once every few days in cities ruled by Soros DAs an innocent person is murdered by a criminal who’s roaming the streets due to Soros’ machinations.

Soros himself has admitted that he bases his life’s work on his wartime experience. He’s the Nazis’ inadvertent posthumous revenge on America; the Jew the SS failed to catch likely conducts the equivalent of one Malmedy massacre per month.

“As long as lots of whites are dead and their influence diminished, everything else was worth it.”

What makes Soros’ revenge-o-caust particularly interesting is that he doesn’t deny it. Given any opportunity, he’ll proudly say, “Yes, I use my billions to keep criminals from being prosecuted and incarcerated.” Dude’s a regular Chatty Chelmno. Just two weeks ago, he penned a Wall Street Journal op-ed essentially declaring, “I don’t care about the cost in lives; I’m gonna keep funding DAs to carry out my agenda.”

Soros literally says, “I back prosecutors.” But if you say, “He backs prosecutors,” you’re the woist Nazi since Himmler.

Teachers’ union yenta Randi Weingarten, who’s gifted the U.S. with a generation of children tarded by lockdown- and mask-related learning disabilities (get ready for synergy in about ten years as Soros-funded prosecutors use Weingarten-engineered learning disabilities as mitigating circumstances in criminal trials: “JaQuarius mustn’t be held responsible for slaughtering that family; as a child, AFT Covid policies stunted his intelligence”), tweeted “THIS Is how anti semitism [sic] takes root and spreads. What is a ‘Soros’ backed prosecutor? Soros is a Hungarian Jew who survived the Holocaust.”

I couldn’t help but notice that Nadler tweeted in defense of “defund the police” Soros the same day he voted to add 87,000 new IRS agents to police Americans. Odd how the “progressive prosecution” principle that “less cops and less enforcement leads to less lawbreaking” applies to street crime but not tax avoidance.

With the algorithmic precision of a bot swarm, “Anti-Semitism is real. George Soros is literally a Holocaust survivor” was tweeted hundreds of times all weekend long.

There’s an irony in Weingarten & Co. playing the survivor card to shield Soros. This February, a 99-year-old Holocaust survivor named Jack Mikulincer was killed in Manhattan Beach, N.Y., by a reckless driver with fourteen previous traffic infractions. The driver had gone unprosecuted by Brooklyn’s DA, a Soros minion named Eric Gonzalez (Gonzales didn’t even charge the driver for Mikulincer’s death, even though he was found to be at fault).

Of course, to Soros, a few old dead Jews is just collateral damage. He’s a man who knows his history; the WWII aerial bombing of Germany killed thousands of Jewish laborers. But hey, it was a small price to pay for the destruction of a fascist white empire.

Just as Soros is the last living active Holocaust-connected murderer, Weingarten’s survivor card defense of him is likely the last time we’ll see “Holocaust survivor” carry import in U.S. political discourse. It’s not just that the survivors are nearly all dead (more so every month thanks to thugs freed by Soros DAs); it’s that the Holocaust itself has waned in its ability to end a debate upon invocation. Millennials and “Zoomers” are as ignorant of the Holocaust as they are of everything that happened before 2000. But that’s not necessarily relevant here; morons don’t need to know about something to opine on it (how many youthful dolts who are reflexively against nuclear power actually know how a nuclear power plant works or possess even the smallest knowledge of nuclear’s impressive safety record?).

No, the word “Holocaust” will always have strong name recognition. There’ll always be mandatory public school courses, taxpayer-funded museums, documentary films, and such.

The problem isn’t not knowing but not caring. “Brown” America, the nonwhite Americans exalted domestically and imported from abroad by people like Soros and Weingarten, don’t give a damn about no Jew Holocaust. Back in 1996, a landmark Contemporary Jewry study found that black and Hispanic students not only don’t give a crap about the Holocaust, black students actually care less about it the more they learn about it. The study found that focusing on the Holocaust in school makes black students actively hostile toward Holocaust history.

The Contemporary Jewry study concentrated more on blacks than Hispanics (hey, it was ’96; we still had borders), but recent polls show that Hispanics are roughly at the same level as blacks regarding knowing or caring about the ¡Hola!caust (“ese, I hear the Jews were killed at Dachau Bell”).

When Weingarten and other leftists play the survivor card to defend Soros, they’re targeting the only remaining demographic that can be moved by that strategy: college-educated Jews and whites.

Now you might ask, why bother? Those are solid Democrats. Why bully them?

Well, that’s the interesting part. As the Boudin and Gascon recalls, and the revolt by Philly Democrat legislators against Soros DA Krasner, demonstrate, the most serious threats to Soros are coming from the left. And while it’s completely expected that anti-Soros resistance would be strongest in cities that are suffering the most from Soros crime, it’s rather stunning (and I’ve covered this before) the extent to which rightists are not opposing Soros. Just a week ago, a Soros-bot became the new Memphis DA. And while Memphis is majority black and soundly blue, white conservative residents in nearby areas, especially in Mississippi, are routinely plagued by crime that spills from Memphis.

Yet during the Memphis DA’s race, I was struck by how the residents of red areas around Memphis didn’t see the fight as their own. “We got our guns; let ’em try to come here!”

This is exactly the response Soros counts on, that wagon-circling “hyuck hyuck, let them blue cities burn, ah gots mah gun” attitude. Invisible state or county borders don’t stop rot. If national borders don’t stop rot, how are domestic map lines going to deter criminals and keep property values from plummeting due to encroaching lawlessness? And the next time you “hyuk hyuk” about yer gunz, ask the Arbery defendants, now sentenced to their second life term (the overkill was intentional, to send a message), if they’re “hyuk hyuking” in the pen. Even if the Arbery defendants had been successfully protected at the local level—and they weren’t—the feds came after them as they’ll do to any Cletus who uses his “rahfle” to defend against black crime from nearby municipalities.

So with conservatives betting everything on invisible map-line force fields and the good faith of federal authorities to approach cases of white self-defense fairly and with no racial bias (good luck with that), Soros and his defenders understand that the fires they need to douse are the ones on the left.

Hence the use of the survivor card, in an attempt to stifle revolt among “friendlies.”

I don’t think it’ll work. In part because Soros betrays the Hollywood image of the survivor as weak and powerless (blacks, whose antiwhite hatred is aggressive, want to see movies where slaves fight back. But passive-aggressive Jews and self-hating whites prefer Holocaust movies where helpless survivors get shat on by sadistic Aryans). And in cities like L.A. and NYC, while there remains a hopeless demographic of far-left secular Jews, as the right-leaning Orthodox grow in numbers and influence, they diminish the power of Holocaust tropes in local politics. The Orthodox have never been behind elevating the Holocaust to defining Jewish element. Indeed, for decades “intellectual” Jews have despised the Orthodox for viewing the Holocaust as punishment from God and therefore “just,” as all of the Almighty’s actions are (“divine retributive justice,” as Ben Gurion University’s Daniel Lasker describes it).

And Persian Jews? The Holocaust means nothing to them. Arabs? The less they hear of it the better. Add that to the indifference (by Hispanics) and hostility (by blacks) toward Holocaust history, plus the lack of Holocaust awareness on the part of millennials, and you’ve got just two target audiences left for the survivor card strategy: middle-aged and older secular Jews and college-educated whites.

And it’s Soros and the Dems who are rendering that demographic irrelevant, in the process rendering the survivor card irrelevant.

A case of self-hoisted petarding? For white and Jewish Democrat elites, sure. But not for Soros. As I said, he doesn’t care if every last survivor is murdered if it leads to his ultimate goal: the destruction of the white West. In this way, Soros is like Hitler on purpose. By that I mean, in Hitler’s final days, awaiting death in the bunker, with the Reich in ruins, the Soviets killing, raping, and despoiling throughout Germany, he banged out a final testament in which he essentially said, “It’s all fallen to shit, but at least I killed a lot of Jews and lessened their numbers and influence in Europe.”

That was, of course, a rationalization. Hitler would’ve preferred to have his Reich back; he’d have preferred to be touring conquered Moscow. But left with nothing but ruin, he put a happy face on it by taking solace in the notion that the real victory was the Jews he killed along the way.

As Soros awaits death, for him, the whites he killed along the way are the point. They are the victory. He was never looking to build, but destroy. So if he leaves behind a lot of collateral damage—dead Jews, a survivor card rendered powerless—so what?

As long as lots of whites are dead and their influence diminished, everything else was worth it.

Shaw’s book was fiction. Soros made it biography.