The Liberty to Hate 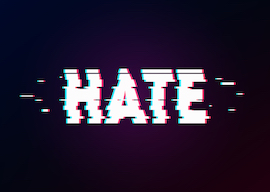 If you want to understand politics, it is instructive to overcome the common prejudice against negative feelings—enmity, hatred, contempt, envy, resentment, and others—because though often concealed by people’s moral delusions and self-serving social games, they are constitutive of political ideology and essential to political action.

Consider David French, that phony conservative par excellence. His April 22 column in Time magazine—“Donald Trump Is Weak and Afraid. The Mueller Report Proves It”—is typical of French’s method. Instead of criticizing the president’s neoconservative foreign policy and betrayal of the American working class on the labor/immigration issue—the subjects for which he deserves criticism—French moralizes about what a bad person Donald Trump is. I don’t doubt that he’s right. Yet why assume good character is such a virtue in politics? As I argued in my July 6, 2018, column, “The Psychological Naïveté of Trump’s Moralistic Critics,” the opposite is more likely to be true, on account of the very nature of politics.

But of course, the nature of politics doesn’t matter to David French, for he has two principal functions: policing the culture in his schoolmarmish fashion, and supporting Israel’s right to do whatever it wants to its neighbors, something that American taxpayers are supposed to eagerly fund. By these means, French earns a good living, is not too conservative to write for popular liberal publications such as Time and The Atlantic, and serves the interests of the National Review Institute. This “nonprofit” relies mainly on neoconservative donors, though it also gets funding from Google, two groups whose interests are averse to those of the nonaffluent—that is, most Americans.

Concerned to make himself acceptable to the left he pretends to oppose, French often tells us that he is a Red State Christian whose family is multiracial, he and his wife having adopted a little girl from Ethiopia. And yet, there’s no Christian charity in French’s prolific writing on Donald Trump. The reason is that French’s moralizing is but a veneer on the enmity that defines and drives his politics, and which spurs his neoconservative readership to try to undermine the Trump administration.

Here, then, is the essence of America’s official right. They are like men who go to war dressed up as angels, because they don’t have the guts to show themselves for what they are. Their language of values is a masquerade intended to obscure their personal interests—namely, the desires for wealth and recognition. Thus, Jim Geraghty wrote at National Review Online on Wednesday:

Every time the socialists have risen up and attempted to push us, National Review has stood athwart them, yelled “Stop!” and pushed back. You and previous generations of right-thinking Americans have been kind and generous enough to keep us in the fight every time. Please keep us in the fight now. Your each and every contribution—whether it be $10, $25, or $100, or if it’s $200 or $1,000 or maybe even…—$10,000!—is meaningful, consequential, and needed.

“It is only too easy to let the general prejudice against negative feelings and open conflict obscure how politics really works.”

In truth, National Review’s “fight”—an indefatigable monkey wrench—does little besides produce populists like Donald Trump on the right and Bernie Sanders on the left. No matter. Yell “Stop!” and send in your check, “right-thinking Americans.”

It is telling that American “conservative” pundits rarely distinguish between liberal calls for a greater social safety net and socialism proper. For these paranoid hysterics, it’s all the same: Socialism is bad, and means Venezuela, the Soviet Gulags (never mind that they happened under communism), Nazism, etc., etc. Like the constant attacks on Trump’s character, the constant twaddle about socialism is largely manipulative: Good people like you need to be saved from some looming evil; therefore, be “kind and generous enough” to donate to our worthy cause.

Since the left is culturally hegemonic, many leftists feel no need to conceal the enmity that defines their ideas and drives their political actions. Rather, they frankly declare their loathing for traditional values, conservatives, and above all, white men. So it has become normal in recent years to read open racism against “oppressor groups” in the pages of The New York Times, The Atlantic, The New Republic, and other leading leftist publications. Meanwhile, this will to power (as it were) is aided by hypocrisy, the left’s oldest friend (along with envy, with which it often works in concert). “I always chuckle,” a discerning friend recently wrote to me,

when all my impeccably liberal, cognitive elite friends—who are always prattling about “diversity and inclusion”—head straight for the whitest, toniest, most traditionally legacy-WASPY (and thus gracious, decorous, litter-free and orderly) spots for summer leisure. Every year I take the grand tour of visits: the Berkshires, the North Shore of Long Island, the Hamptons, Shelter Island, Dutchess and Columbia Counties, northwest Connecticut, Vermont, the New Hampshire lakes. It’s white flight with a vengeance. And no one sees the contradiction. Instead, everyone says, “Well, we’d love to have more minorities here,” (right!) and quickly changes the subject to other topics (like real estate).

Human morality is commonly a shallow, conformist affair, and we see just that here. Paying obeisance to “diversity and inclusion” (that is, discrimination against white men) is meant to stave off the resentments of minorities and of feminists, while elevating oneself to the status of a kind of lord over the ignorant and wicked Deplorables. Of course, apart from the power grab, it’s all a vacuous abstraction, appealing only to the genteel. Working-class people, who have nothing to gain from it, don’t play this game. They see right through it, and rightly despise it.

Nor does pretending to value “diversity and inclusion” protect the left from its internal contradictions and hostilities. Although blacks, gays, feminists, and other resenters are united by their opposition to the right and to what remains of the once-dominant patriarchal WASP culture, these groups are nonetheless at odds with each other. Transgender “victims” feel excluded by gays. Black women, with their relatively low mean IQs and low mean sexual market value, resent feminist white women. Asians resent blacks since the latter group, in order to benefit from affirmative action, hinders the former’s academic success. Blacks and Hispanics resent each other owing to mere proximity in lousy living conditions. And so on and so forth.

The official right presents itself as being above all this. It supposedly recognizes that certain views are intolerable, but even so, we must not resort to ill will in dealing with the leftist opposition. We “civic nationalists” are better than that. We have certain values to strive for: “free markets,” “the rule of law,” “the West’s Judeo-Christian heritage,” “the permanent things.” But always our endeavors must be those of gentlemen.

What gives the lie to this charade—which resembles the “good team member” pretense of manipulative corporate America—is the official right’s general cowardice. This trait suggests the group is largely self-serving, and by no means committed to advancing or preserving conservatism. The correlation between ethnicity and demographics and cultural values and mores; racial differences in mean intelligence (with their important implications for policy); taking traditional gender roles seriously; the liability that is America’s Zionist foreign policy; the sovereignty of other nations—with few exceptions, these subjects and other sensitive ones are off the table for right-wing writers. For like the left, the right consists mainly of professional intellectuals. That is to say, people who live not for the truth (as they understand it) but by it.

Effectively owned by their touchy donor base, the official right is nothing if not inconsistent. Thus, Ben Shapiro’s advocacy for free speech does not include Richard Spencer. If the Claremont Institute gets censored by Google, or if James Woods or David Horowitz gets booted from Twitter, various conservative pundits will criticize the acts that, though legal, are not desirable. Yet if we are really serious about free speech, we must also support the expression of people whose views we detest. And as it is, men such as Richard Spencer, Jared Taylor, and Greg Johnson can count on more support for the free expression of their views from old leftists such as Noam Chomsky and Brett Weinstein than from the faux moralists of the official right.

From some conflicts there is nothing to be gained, and civil discourse is preferable to unnecessary enmity. Still, it is only too easy to let the general prejudice against negative feelings and open conflict obscure how politics really works—to let morality keep us from seeing clearly. After all, politics always comes down to group struggle of some sort, and it would be quite naive to think that that always or usually can be altogether positive, morally and emotionally.

For enmity is the psychological corollary of the most vital disagreement. And even if, as is often the case, we don’t notice it, enmity and other negative feelings frequently constitute or help to constitute our political opinions. Nor is that altogether bad. On the contrary, such antagonism moves us to take action, to realize the ends that otherwise would have no life outside of the abstracting minds of superficial intellectuals.

Americans are taught to value the liberty to pursue happiness. For those who prefer hard and messy reality to easy and comforting fantasy, whether of the left or the right, there is something to be said for the liberty to hate.