The Myth of Boomer Privilege 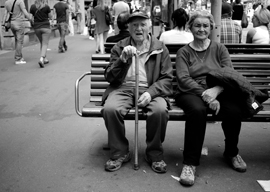 The major theme of my writing is guilt—how blaming others is maliciously used as a disabling mechanism and how people and cultures toss it around like a hot potato. No one, unless they’re masochists or are trying to earn social-approval points, ever wants to accept guilt—they want to tie it around someone else’s neck and let them sink to the bottom of the lake with it. This is why I believe Christianity has such perennial appeal—because Jesus takes the rap for you.

I’ve been making this point for years, but you’ve all been too busy projecting your guilt onto others and blaming them for all your problems to listen to me.

The reason I get fixated on certain topics is because they in some way powerfully reflect this theme of misplaced blame. This may burst quite a few of your bubbles, but the fact that I’ve focused on the endless bashing of whites for years is not a sign of how deeply in love I am with white people but rather a fascination with the fact they’re getting blamed for many things that demonstrably aren’t their fault. It’s the same reason I focus on the gender wars—men nearly aren’t as awful as they’re being depicted, and women are nowhere near as innocent as the current narrative says they are.

If you haven’t been paying attention, there’s been escalating intergenerational hostility across our fair land, and people are increasingly identifying with dumb, media-manufactured generational names—AKA Baby Boomers, Gen X, Millennials, and Gen Z—as if they were scientific categories that are predictive of human behavior rather than arbitrary designations along the lines of Virgo, Capricorn, Scorpio, and Leo.

It’s some weird new metastasized form of identity politics. And, since it comes with the turf, these groups are blaming each other for all that ails the world.

It’s dumber than astrology, and I’ve already covered that, but this intensely stupid way of framing the world refuses to die.

“Many people understand why ‘white male privilege’ is a dumb idea, but they’ll cling to the idea of ‘Boomer privilege’ like brain-damaged rodents.”

So when people ask me, “Why do you keep talking about this ‘Boomer’ thing?” the answer is retardedly obvious—because the rest of the world can’t shut up about it for three seconds. It’s also because I sincerely believe it’s yet another historical example of misplaced blame on a grand scale. Then again, fundamentally insincere people seem to think everyone else is insincere, too, so they’ll dodge my point and question my motives.

Just this week, The New York Times dismissed Barack Obama’s criticisms of “cancel culture” merely by pointing out that chronologically, he’s a Boomer. It couldn’t possibly be that Obama’s criticism was sincere—no, he’s an automaton whose opinions are entirely programmed by his birthdate.

Here, picked at random, is an example of the narrative that far too many people have gullibly swallowed like baby birds chugging down worms straight from their mama’s beak:

Baby Boomers are a generation that grew up in an era of unimaginable prosperity, and failed to realize that in their act of “keeping the good times rolling” cashed checks future generations had to pay.

It reminds me of trying to argue with a leftist that I had no hand in the black slave trade. It feels depressingly identical.

Many people understand why “white male privilege” is a dumb idea, but they’ll cling to the idea of “Boomer privilege” like brain-damaged rodents.

What also fascinates me is that while the left will only bash white males, this boomer-bashing thing spans the political spectrum. Young white nationalists and young white Antifa members are united in blaming their elders—not all of them, but most of them; they’ll always concede there are “a few good ones,” just like there are a few good Negroes, I suppose—for the fact that their prospects in life are dimmer than those the Boomers enjoyed.

I’ve explained repeatedly why I suspect this specific form of targeted hatred is permitted and even encouraged, but I keep hearing a loud collective WHOOSH! sound every time I try.

Being a brave man with enviable endurance, I’ll try again. I believe it’s related to pensions, Medicare, and the whole Social Security scam. Boomers paid into these funds with the naive but innocent understanding that their money would be returned. Instead, the government spent it on other frivolities such as wars for Israel and keeping the Federal Reserve happy, so there’s no money left, and naturally the younger generations will have to pay. I believe that the elites want to get the younger generations so angry at the Boomers that they cut off what was promised to them—so angry, they dream of the day that Boomers get murdered in nursing homes.

OK, Zoomer. Two can play this game. Keep in mind that the little magic trick I’m about to perform here does not mean I’m blaming your generation for any of these things, because I’m not a Generational Astrologist. I’m merely taking what you do and flipping the script:

Yours is the generation of “woke culture” and Antifa. As much as you yabber about how the Boomers let the culture slide into liberalism, atheism, and degeneracy, your generation is far less religious than the Boomers. You lean heavily socialist and encourage “punishment”for Halloween costumes you deem “offensive.” While the world is burning, the Zoomers’ top three voting issues are emotionally laden trifles such as “mass shootings, racial equality, and…treatment of immigrants.” You are far more anti-racist, anti-“hate,” and pro-LGBT than any generation that preceded you. This is not my opinion—it’s a statistical fact supported by every survey and poll I’ve ever seen.

Therefore, every Zoomer is personally responsible for Drag Queen Story Time and the fact that there’s no wall on the border, because you just sat there and LET it happen. Three trillion dollars have been added to the national debt since Trump’s inauguration, and you Millennials and Zoomers just sat there and LET it happen. The tech giants are doing purges of people for thoughtcrimes, while your generation hides behind goofy fake names and clown avatars and LETS it happen.

That’s because every member of every generation is 100% responsible for what happens on its watch. Get down on your knees and APOLOGIZE!

And if you don’t repent immediately and bend to my shaming tactics, you fucking deserve all the righteous pain the generations after you will rain down on your selfish head.

See how stupid that sounds when it’s applied to you?

Politicians enjoy a little generational warfare if it suits their needs. They’ll even instigate it. And as far as I can tell, this sudden emergence of a generational identity-politics civil war is a divide-and-conquer tactic that has worked wonderfully.

But if you don’t shut up and take a moment to consider that you’re being played—that potential political allies are deliberately being split along generational lines to distract attention from who’s actually pulling the strings—I won’t shed a tear about the fact that you’ll be stuck in a world you mistakenly think I’ve created for you. I might even start taking extreme pleasure in how bleak your future will be for no other reason than the fact that you’re acting like a malicious asshole to me. I’ll take all your malice and fling it right back at you, because I’m really, really good at that.

On the other hand, if you want to talk rationally and try to figure all this out, let me know. I’m highly capable of doing that—apparently, far more than most of you drooling meme-tards are.