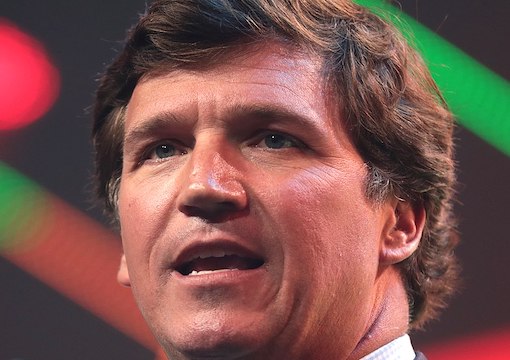 Leftists love to paint Tucker Carlson as a racist, a Klansman who grows strange fruit in his backyard.

If so, he’s the first Klansman in history who hates discussing race.

There are many examples; here’s one of my favorites. In February 2021, Tuck launched a bizarre narrative about how the media’s hatred of whites and adulation of black criminals is a sinister psy-op by bankers!

“I’m focusing on Carlson because of his high profile, but this is a problem with the right in general.”

An interesting theory comes to us from a researcher called Zach Goldberg. Goldberg looked at every time the term “racism” was used in America’s largest newspapers and noticed a trend. There was a noticeable spike just after 2011, which not coincidentally was right around the time of the Occupy Wall Street movement. When people are starting to talk about what Wall Street actually does in public, all at once journalists agree that the real problem with America is racism.

Got it? All that racial demagoguery, the 1619, the CRT, is not about race. It’s banksters trying to distract us from their economic chicanery!

Funny enough, back when Occupy Wall Street (OWS) was actually happening, Tuck never once said a good thing about it. In fact, he hated it. I’m curious when he realized that it was such a beneficial, important movement, the nation’s Rothschild T. Rockefellers needed to stir up racial hatred to sabotage it.

But Tuck’s conversion to OWS-loving tree hippie aside, let’s look at that Zach Goldberg research. In fact, it shows the exact opposite of what Tuck says it does. On his program, Tuck ran a doctored version of a Goldberg graph (the x-axis details were deleted), and the Fox transcript of Tuck’s monologue doesn’t link to the graph. But here it is. It actually demonstrates that media mentions of race declined during and immediately after OWS. The skyrocketing began in 2014, with Ferguson (if you read my colleague Steve Sailer you’d have been able to figure that out on your own).

Still, the fact that Tuck’s evidence for his “Wall Street psy-op” theory is a graph airbrushed to invert its meaning hasn’t stopped him from repeating that talking point again and again.

On April 29 of this year, Tuck stated that the Biden administration’s war against “white supremacy” is just a ploy “to get you to stop thinking” about “Occupy Wall Street.”

Wow, something that’s been dead for over a decade is still so prominent in the public’s mind that we have to be hypnotized to stop thinking about it?

Tuck, understanding the incurious nature of his audience, has even rejiggered his conspiracy theory, knowing full well that nobody will notice. From April 20:

Since that time—2008–2009—our leaders have been telling us over and over again, many books have been written about it, that the central divide in America, the seeping wound, the original sin, is race. Consider the timing. At exactly the moment the U.S. government bailed out Wall Street, not a popular move, use of the terms “race” and “racism” in ‘The Washington Post,’ ‘The New York Times,’ and ‘USA Today’ jumped by more than 700 percent.

On March 17, Tuck did a segment about how Biden’s border policy was creating a crime wave in Houston. He showed police body-cam footage of a shoot-out with an unseen perp armed with an automatic rifle. Tuck claimed the perp was an illegal alien, adding, as the video rolled:

Open borders did this, Houston didn’t do it to itself; this was done TO Houston and not just to Houston, to so many places across this country where millions of illegal aliens have flooded in during Joe Biden’s presidency.

To be clear, open borders absolutely bring crime. But in this instance, Tuck was straight-out lying. The gunman in the video was cop-killer Deon “Baby D” Ledet, a black man born and raised in Houston.

Yes, Houston indeed “did it to itself.” The Ledet case has nothing to do with Biden or the border and everything to do with the fact that a 30-year-old black felon with a fifteen-year criminal history including evading arrest, narcotics trafficking, aggravated assault of a family member, aggravated assault with a deadly weapon, and car theft was not only still walking the streets but out on bond with no ankle bracelet.

If there’s a “lessen” in the Ledet case, it ain’t about the border. It’s about how heavily black cities (even in “red” states) will invariably be high-crime. But again, Tuck misrepresented the facts to avoid mentioning race.

Even regarding immigration, Tuck routinely evades race, repeatedly claiming that his opposition to open borders has nothing to do with the quality of the entrants but rather their political affiliation (“Democrats are importing new Democrats!”) and “lack of space” in the U.S. (in January he declared that even if all new immigrants were Nobel Prize winners, we still wouldn’t have room for them).

I’m focusing on Carlson because of his high profile, but this is a problem with the right in general. Most rightists with a national soapbox bend over backwards to remove race from every contentious issue. It’s “the Democrats are the real racists” made manifest in the right’s response to everything. “The Democrats make immigration racial, but it’s not racial to us! We’re just worried about overcrowding. Why, we’d turn away a Danish Nobel winner as quickly as a Somali rapist.”

“America has no racial problems! Just banksters and racist Democrats trying to divide us!”

In 2016, Trump’s greatest effrontery to Con Inc. was that he dared to acknowledge that nonwhite nations were sending screwed-up migrants. You’re not supposed to admit that!

Worse still, you’re not supposed to win after admitting that. Be like Rich Lowry instead, who explained last week that there are in fact two “great replacement theories”: the “anti-Semitic” one that involves race (Americans foolishly worried that importing Third Worlders might turn America into a Third World nation), and the respectable one that involves party affiliation (Americans wisely worried that immigration might bring in more Democrats!).

Because we all know that when white Americans are house-hunting, they’re never concerned with things like whether a neighborhood is 90% Honduran immigrant and the school district 90% Spanish-speaking. No, they look for how many Democrats live nearby!

Of course these issues are racial. Crime, immigration, the dumbing down of education, the abandonment of merit in hiring, are all racial issues.

The left has gifted the right with these issues that score well with the core (if increasingly neglected) GOP base of blue-collar whites. Yet rightists feel like they can’t use the gift. They’re scared to.

Sometimes that fear is nonsensical. Like the fear that if you broach race, leftists will call you a Nazi. Well, the left’s gonna do that anyway. None of Tucker’s artful sidestepping has ever made a difference to his critics.

But sometimes the fear is understandable. The Tucker types who come close to broaching race—they dip their foot in the pool, then run away giggling “tee hee hee” like a schoolgirl—do so in part to avoid alienating the right-leaning whites who become uncomfortable when things get too racial. Yes, these whites probably take race into account in their private lives. But they likely don’t boast about it, and they may shy away from politicians or pundits who force them to confront the role of race in key political controversies. That’s why the left does race more effectively than the right. Today’s leftists have been raised to be vocally and unapologetically racial; to be openly hostile to “whiteness.” But moderate and conservative-leaning whites generally don’t embrace hostility toward blacks. They don’t seek racial discord, so when it’s thrust upon them, they tend to gravitate toward solutions that are grounded in nonracial rhetoric.

Hence Tuck’s popularity and why he isn’t held to account for flat-out lying about the Goldberg graph. Hence how frauds like Newt Gingrich can exploit conservative sentimentality about race to whore for Soros.

On the other hand, 2016 Trump flirted with race unsentimentality, and he won swing states.

It’s a delicate balancing act, to be sure.

Complicating matters, and I say this as someone with decades of experience on the rightist fringe, the people on the far right who gleefully and aggressively embrace racial hostility are downright scary. It’s not a constituency a wise man pursues. Endless, constant social engineering, telling whites that the worst, most evil thing they can be is antiblack, has engendered a situation in which unstable, antisocial, “transgressive” whites are drawn to racially inflammatory rhetoric. Yet while antiwhite race-haters on the left can find mainstream outlets for their aggression, their antiblack rightist counterparts can’t. So they sit and seethe, sometimes popping off violently, becoming just the monsters the SPLC needs.

It’s a dynamic I saw play out with Holocaust revisionism in the 1990s. While every corner of society—all political parties, academia, and the media—denounced revisionism as the worst thing to inflict upon Jews, a small band of reasonable people, like Mark Weber of the Institute for Historical Review and myself, and a small group of respectable allies like Christopher Hitchens and John Sack, tried to maintain a rational center, a sound historiography that rejected the ADL screechers on one end and the denier cranks (the sociopaths who were attracted to revisionism specifically because they believed it was the worst thing you could inflict upon Jews) on the other.

And we, the rational ones, failed. The reasonable revisionists were chased out of the field via censorship, prosecution, threats of violence, and career-killing accusations of Jew-hatred, and the resulting void was filled with the denier nutcases who welcomed the conflict.

With the center gone, the two extremes thrived because they fed off each other (the ADL that seeks bogeymen and the deniers who want to be bogeymen).

In theory, this could happen on the right regarding race. The people I’d describe as the right’s “rational racial center” (men who neither run from the issue nor approach it like trolls), Sailer, Peter Brimelow, and Jared Taylor (all of whom thoroughly eschew sentimentality), have almost no platform as it is, and eventually they’ll be completely silenced, slandered, and aged out of existence. Just as the rational revisionists of the 1990s used facts, reason, and sound methodology to explain and address flaws with WWII historiography, the race-rationalists on the right are doing the same to explain and address societal ills.

What happens when that center collapses? You’ll be left with the two extremes: troll hunters and trolls, both sides in it for the joy of the game, with no desire to explain or address anything.

Issues like crime, the border, affirmative action, and CRT are electoral winners. But navigating those issues while kinda acknowledging the racial aspects but kinda rejecting them as well is such a minefield, such a maze, the right often fails to profit politically as much as it should.

Maybe Tuck’s one-toe-in-the-pool coy-little-schoolgirl disingenuousness is the best the right can do at the moment.

If so, that’s not good news.