The Scramble for America 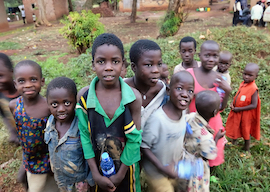 The Scramble for Africa became possible when Europeans began to use quinine to lessen the ferocious toll that malaria took upon whites. Before the later 19th century, Europeans had barely penetrated into the interior of tropical Africa. But as indigenous diseases became less lethal, a great enthusiasm arose in Europe to colonize Africa. The fraction of Africa ruled by Europeans grew from 10 percent in 1870 to 90 percent in 1914. (By 1977, the percentage was zero. A century of experience with Africa left whites with rather little interest in it.)

Similarly, the 21st century is witnessing the Scramble for America and Europe as technological innovations boost the population of the Third World and also make migration easier. In particular, the recent spread of the smartphone has emboldened the young men of the Global South to set forth on the adventure of a lifetime crossing the Mediterranean, with the payoff in mind of the most famously beautiful women in the world awaiting them on the northern shore.

The United Nations forecast in 2017 that the population of sub-Saharan Africa would octuple between 1990 and 2100, reaching 4 billion by the end of the century.

In recent months, a few brave VIPs such as Bill Gates and John Kerry have begun to warn that a more moderate African fertility rate would be good for Africa (not to mention—cough, cough—the rest of the world).

Of course, if African fertility control doesn’t happen, and soon, much of this vast population will, if allowed, leave Africa. The disruptions caused to Northern cities such as Detroit in the second half of the 20th century by the Great Migration of 7 million rural Southern African-Americans offers an eye-opening preview of the effects of what promises to be a Greater Migration two orders of magnitude larger.

Likewise, Pakistan, whose grandsons have done so much for the civic weal of Rotherham, is expected to grow from 197 million in 2017 to 307 million in 2050.

“There isn’t anything inevitable about the Scramble for America. It’s well within our capabilities to defend our homeland.”

Curiously, however, unlike in the 1880s, the lands being colonized in this new Scramble are richer, technologically superior, and militarily stronger than those doing the colonizing. In other words, there isn’t anything inevitable about the Scramble for America. It’s well within our capabilities to defend our homeland.

As evidence, a few self-confident countries, such as Israel and Hungary, have virtually eliminated illegal immigration through simple expedients such as border barriers. Israeli prime minister Bibi Netanyahu, for instance, routinely tweets out photographs of the ferocious fences and walls Israel has quickly erected in recent years.

But much of the rest of the First World is paralyzed by the widespread assumption that its peoples don’t deserve to protect themselves from being colonized. For example, Speaker of the House Nancy Pelosi recently proclaimed, “The fact is, a wall is an immorality. It’s not who we are as a nation.”

Who we are, evidently, are the people who aren’t here yet.

Elites like Pelosi tend to be motivated by self-interest (that’s how they got to be elites): The Scramble for America has turned Pelosi’s California into a one-party state and might do something similar for the rest of the country. Her descendants, of course, will do fine for the foreseeable future.

Obviously, Pelosi’s rhetoric isn’t intended to persuade anyone rationally: Like much of elite reasoning in recent years it’s fundamentally childish, based on an appeal to simplistic assumptions about who are the Good Guys and who are the Bad Guys. The dominant dichotomy about punching up versus punching down, for example, makes sense to a 6-year-old boy: We know that the good guys punch up at the bad guys. Why? Because they are good.

Consider the Covington fiasco in which much of the media leaped to the conclusion that the boy who stood stoically while being harassed by the alcoholic drifter had to be the bad guy because…well, because we hate his white male face, so that must mean he is the Face of Hate.

Unfortunately for the press, the kid not only didn’t do anything to apologize for, he didn’t apologize anyway.

Many pundits took away the message that their only mistake was using Twitter to immediately express their hatred for Core Americans rather than writing it up for a slower-moving outlet from which they could have pulled their piece before it was published. For example, New York Times columnist Farhad Manjoo explained:

I will confess that when I first saw the video of a smirking teenager staring down a drumming elder, I, too, was stirred to outrage. My politics lean against the kids’, and something about their smugness and certainty—they seemed to be doing tomahawk chops and were wearing hats supporting a racist president—confirmed all my priors about the ugliness of our Trumpian times.

You might think that Manjoo would go on from there to do some public soul-searching about why he is so bigoted against Core Americans that he let his racist prejudices cloud his judgment. But instead, he merely took away the lesson “Never Tweet.”

Of course, the problem with Twitter for journalists is that it allows them to instantly expose their hate-driven bias without an editor suggesting that they more artfully disguise their intolerance.

A related bizarre aspect of the Scramble for America is the ever growing demand in American media for commentators to do the Job Americans Just Won’t Do: dreaming up ever sillier microaggressions for Core Americans to apologize for—what I call “immigriping.” I’ve read numberless op-eds by interns with unpronounceable names lambasting white Americans because at some point in the past there was one American white who couldn’t pronounce her name. (And then another asked to touch her hair.)

For example, Rachel Hatzipanagos of The Washington Post tweeted this week:

Are you a POC who has been confused for a colleague at work? Want to talk about how that made you feel? Contact me for an upcoming story for The Post’s race and identity newsletter. [email protected] or leave your info here

The implicit or explicit solution for whatever our new immigrant overlords shamelessly complain about is that America should let in more of their extended family. For example, Manjoo wrote in the NYT:

There’s Nothing Wrong With Open Borders
Why a brave Democrat should make the case for vastly expanding immigration.

The Scramble for America is on, and Americans are ideologically ill-equipped to survive it.